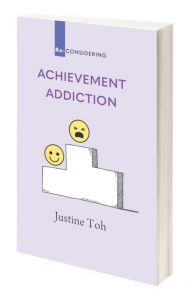 Work ethic-wise, I peaked at 18. To prepare for my final high-school exams, I spent weekends writing essays under exam conditions. Afterwards, my hand would be a claw, the jagged shapes of letters evidence of the physical strain – and maybe my fraying mental state. But I’d feel less haunted than before I picked up the pen. Even, strangely, high.

I can barely remember what I wrote about, but I can’t shake what all that practice taught me: the need – nay, the compulsion – to work, work, work: to prove myself, to justify my existence. All in the hope that one day, all that strenuous effort would pay off.

But reading about the study habits of high achievers today, it hits me: I got off light.

Take 15-year-old Tina Huang, who told novelist Alice Pung that she sat a three-hour scholarship preparation test every week at her coaching college. Maths, English, and two essays were routinely covered, though ‘for an extra $25 you could also do an abstract-reasoning test’, Huang said. ‘They run the tests through a machine and tah-dah, you have your results and self-worth all summed up in a pretty blue graph.’

Exam prep and excoriating self-examination. Asians do love a bargain!

Then there’s a certain hall at Sydney’s Olympic Park where, these days, academic striving has superseded athletic ambition. In summer, when teens might otherwise be, you know, enjoying themselves, a thousand studious adolescents find themselves sitting portions of a practice selective school exam. You can imagine their heads bent diligently over their desks, a balmy breeze wafting in every so often from the outside.

This scene, written up in The Sydney Morning Herald, is rather coy about the ethnic make-up of the majority of test-takers. But given that the story is fundamentally about tuition, a sector with at least 75% Asian clientele, take a guess what background might heavily feature in the crowd?

These opening illustrations aren’t meant to (further) stigmatise the Asian, overachieving student – often a figure of pity, if you’re feeling indulgent, or irritation, if they’re topping English as well as Maths. I’m telling you about Tina Huang and the academic strivers at Olympic Park because, as a Chinese high achiever myself talking about achievement addiction, I’m tapping into one of the most controversial issues in education in this country: the dominance of Asian students in public selective schools. So we may as well deal with that elephant – or tiger mother and her dragon child – in the room.

Yes, I might be leveraging unhelpful stereotypes here – of the Asian straight-A student – that I personally have felt the pressure of and want to challenge. Yes, I’m taking the risk of perpetuating the myth of the ‘model minority’ that assumes that all Asians are studious, self-reliant and hard-working, when Asians are just as diverse as any other group. And yes, thank God I’m Chinese, or I’d be crazy to rush in where the white woke fear to tread.

But I must also confess that I can’t help but marvel at Asian high achievers. They – we – are people of grit who work extremely hard to reach their goals. As such, they merit our attention because they – and their highly motivated parents – are the ideal citizens of the meritocracy, or the equal opportunity system where the hardest workers rise to the top.