After Capitalism: Rethinking Economic Relationships, by Paul Mills and Michael Schluter is a collection of thoughtful essays that critique the modern capitalist system, and suggest modifications that take more consideration of building relationships. The authors make their recommendations, but acknowledge that such a change in focus would restrict growth and impact living standards. Their point, though, is that any measurement of standard of living must include more than just a monetary value.

Admirably, the book goes further than most Christian books about economics. It attempts creative theory‑building rather than just producing a litany of complaints about mainstream economics. And it is also good to see theology imbedded in their outlook in an explicit way. Their approach, which they call ‘Relationism’, draws deeply from the doctrine of the Trinity—God as one being made up of three persons, Father , Son and Holy Spirit in perfect relationship. If God is relational in his very being, then his creatures made in his image ought to reflect something of this relationality, and this has implications for sharing society’s wealth and for not letting wealth creation get in the way of relationships. 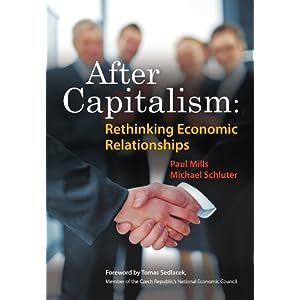 Mainstream economics tries hard to separate questions of productive efficiency (producing the most without waste) and equity (fairness). Many economists, including Christian ones, believe that the economy should be run as efficiently as possible, and then the resultant wealth can be redistributed.

Mills and Schluter take a different path. Drawing on what Christopher Wright calls a paradigmatic application of the Old Testament (OT) Jewish theocracy, they suggest that government should relinquish most of its redistributive role to the extended family. They also suggest that fair distribution should be a feature of the original production system, rather than an afterthought. In this way (and in no other) their ideas resemble Marx’s, though they could justifiably point out that widespread ownership of the means of production (mainly land) pre-dates communism by a very long time.

It is an open exegetical question (for me at least) just how much Jesus’ affirmation of the OT law endorses the economic principles of the Jewish theocracy. It is interesting to think how to pursue economic justice with less reliance on government welfare, but I am ambivalent about the outsourcing of most welfare to extended family.

My concern is that this could lead to ‘hit and miss’ delivery which is less desirable than the current system. As I’m sure the authors would concede, such a transition assumes strong and functional extended families, something that Western society finds hard to come by. Of course, their aims of family renewal and the transfer of welfare responsibilities should be pursued together. And, their book is not only directed at high income countries in the OECD but to an audience in places like Africa, Asia and Latin-America where extended families can potentially play a much bigger role than they can in the West.

The authors propose an economic system where goods and services production goes largely unregulated, while input markets (labour, land and capital) are heavily controlled. In a way, this is a call to a reversal of the current system where many people have much more power as consumers (variety of goods etc.) than they do as workers (long inflexible hours).

I strongly agree with Mills and Schluter that workers are people, first and foremost, before they are productive inputs. In this regard, I found their discussion of the downside of labour mobility, on communities and families, very compelling. One of these downsides is the detachment from ‘place’ which they argue leads to a lack of belonging. Another is the increased risk of family breakup, as members follow the person with a job to a different location.

Their most controversial analysis focuses on the last productive input they discuss – financial or physical capital. Drawing on the OT prohibition on interest, they claim the Christian Church abandoned a worthwhile line of thought at the close of the Middle Ages, when these prohibitions were lifted in Europe.

Mills’ chapter on the uses of Interest was a tight economic argument but it left some unanswered questions. It has made me rethink some of the disadvantages of the current system. In particular, guaranteeing some people stable interest income via bank deposits when the economy is struggling is likely to shift the risk onto other people, which the authors claim is not fair. However, if deposit holders are relatively poor, financially unsophisticated individuals who don’t want to be always managing financial risk, then the question is why allowing interest must always be wrong.

Mill’s answer is that our current debt-based financial system seeks to promise security of savings (at least, if we ignore the effects of inflation) but can only do so through the subsidies provided by taxpayers to protect depositors and to finance GFC-style too-big-to-fail handouts.

I remain to be convinced that offering secure savings to low-wealth unsophisticated depositors isn’t worth some government intervention, though the level and type of regulation applied to lenders needs substantial revisiting in the wake of the GFC.

Thinking of these small players leads me to an underlying theme of the book. The authors emphasize the biblical idea that debts must be paid, but they do not take enough notice of ‘size’ and power of some economic actors. They are less open to bankruptcy than I would be – and less appreciative of some of the welfare implications of our current system. I think that bankruptcy has an analogy in biblical grace. Yes, debts must be paid, but not always by the debtor.

This book is a good read for people wanting to see a Christian take on economics. Its authors have experience influencing policy in the UK, and are well-trained. And the attempt to align economics with theology is one of the strongest features of their approach. It is refreshing indeed to be reminded that the economic organization of society should serve relationships – with God and neighbours – rather than the other way around.