Against Pessimism: The fierce hope of Marilynne Robinson

“I am not proposing anything new here”, writes Marilynne Robinson in her new book of essays, as she casually bulldozes one or two assumptions central to modern life and thought.

“This seems obvious enough”, she states modestly, having just deftly exposed the bankruptcy of one term or another as we’ve gotten into the habit of using it.

Well, sure. Now it does.

The experience of reading The Givenness of Things is deceptively soothing. Robinson’s prose distils dauntingly complex thought into beautiful rolling sentences, and then cracks like a whip:

“Recently I heard a neuroscientist in Europe explain that what we call fear is in fact a pattern of heightened activity, synapses firing in a certain region of the brain. This seems to some to dispel the mystery, to refute the illusion of selfhood – aha! there it is! a bright spot on the screen. No doubt if I and a higher ape encountered a lion, there would be an interesting similarity in the pattern of excitation in our nervous systems. And much would be made of this. But if I and the ape were confronted with a subpoena or a pink slip, all similarity would vanish.” 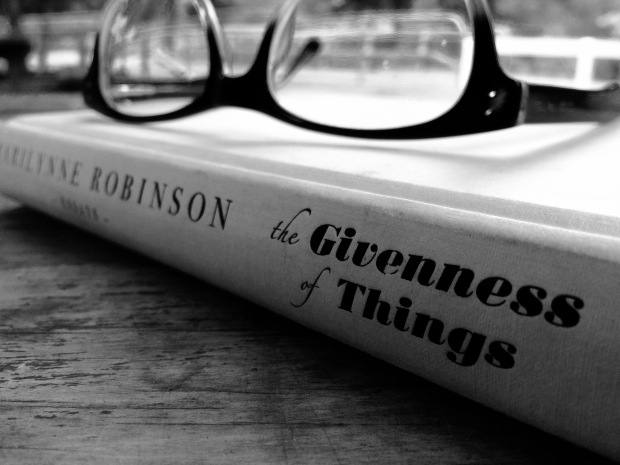 In a series of essays with single-word titles like “Grace”, “Decline”, and “Proofs”, Robinson takes aim at a number of targets that readers familiar with her work will, in many cases, recognise as old foes. The reductionism of much of what passes for neuroscience. Our cynicism, cultural pessimism, and naked contempt for our fellow Americans (sic). Marxists who’ve never read Marx, and dismissers of Calvin who know nothing of the works of Calvin. A purported Christianity that grinds the faces of the poor instead of honouring the image of God in them.

But Robinson can be as warm as she is scathing, and beneficiaries of her particular brand of cultural renovation include: our attenuated idea of Shakespeare; the forgotten Lollards or Wycliffites, with their grand yet tender ideas about universal literacy; the humanities; the value and uniqueness of the human person; Calvin (always); and metaphysics, which has become a deeply unfashionable term (and endeavour).

Though the essays’ enigmatic titles give next to nothing away about their actual content, they fit the book’s cumulative approach, serving as lightning rods for the seemingly disparate subjects that resurface in slightly different configurations throughout the whole.

Robinson illuminates pockets of history and thought that seem disconnected, only to circle back and back again, hinting delicately at the subterranean root system linking that young man in the hoodie to the ploughman to whom Tyndale wanted to give the Bible; or the incarnation to contemporary political culture; or the fantasies of neuroscience and the writing of her novels.

Two themes in particular recur and predominate: the debate between science and religion (though not in the way you’d think); and the question of human exceptionalism.

Robinson has squared off in the past against a scientism that begins by shelving human consciousness as an illusion and a cultural construct, most notably in Absence of Mind, the Terry Lectures she delivered at Yale in 2009. And she has long shown an interest in – even a reverence for – the “new” physics, the increasingly bizarre discoveries of quantum theory.

Some of the most stunning passages in this collection are musings on how odd these new understandings of the cosmos make the decipherable, navigable physical reality of our everyday life on planet Earth look:

“Our comfortable certainties – that if a thing is in one place it cannot be in other places at the same time, that the dimensions that are the architecture of our existence are all the dimensions there are, and so on – these certainties are the things to be marvelled at. It is as if we were a quiet city in the heart of a raging sea, no foundation touching the seafloor, no spire rising out of the waves. Some gentle spell prevents us from grasping our situation, and this is all right because the same gentle spell shelters us from it. We know what we need to know to live in this city. Cows give milk, hammers drive nails, books should be returned to the library. But we know now that the overwhelmingly preponderant forms and theaters of existence are utterly alien to such business. Any reasonable standard of possibility would declare us to be impossible.”

What does this vision of two seemingly mismatched realities – the one in which we build airliners and treat cancer, and the outlandish underlying fabric revealed to us by quantum physics – have to do with religion and science?

Robinson notes wryly that it has been in light of the “old”, mechanistic physics that religious belief has been weighed against notions of plausibility and logic and found wanting. Yet the metaphysics of Christian faith turn out to be certainly no stranger than the “volatile and fantastical” universe hinted at by the physics of our own day.

“It is never my point to make a theological argument based on science”, she cautions. “My point is not that our thinking should be formed by contemporary science, but that it should not be formed, as it has been, by primitive and discredited ideas, whether scientific or commonsensical.”

Robinson’s sketches of humanity make short work of the idea that there’s really nothing special about us as compared with other forms of known life.

This line of argument is of a piece with Robinson’s other major theme: the uniqueness – “brilliance” is her preferred term – of humans, as a species and as individuals. Just as the reality we experience on earth, held up against the workings of the wider cosmos, is “somehow a little enclave of qualitative unlikeness”, so Robinson’s sketches of humanity make short work of the idea, strenuously maintained by some, that there’s really nothing special about us as compared with other forms of known life.

Nor is this a starry-eyed humanism, a sophisticated form of self-congratulation. We are unique in nature, she writes, in all kinds of ways – but not least “for our ability to be consistently, even catastrophically, wrong”. Unlike the animals, we are “singularly vulnerable to deprivation”, “the one creature that must find, contrive, create the minimal circumstances of existence, unhelped by instinct or adaptation”. Unlike them, we have a history, and it is the stuff of nightmares as much as anything else.

To Robinson, it is especially important that we view ourselves more accurately because of the entirely conceivable possibility that we might, in the not-too-distant future, be responsible for extinguishing our own species along with countless others. She has no time for the purported impartiality that would count our species as mere animals, set for extinction as a matter of course:

“Stars burn out and the nature of the universe is more or less unaltered. But if we say that, for all we know to the contrary, there is just one minor planet in a limitless field of stars where apple trees blossom and where songs are sung, then most of us would probably grant an important centrality to that planet.”

So far, so unsurprising, really, to anyone who’s read Robinson before. In between further refining these ideas that are bread and butter to Robinson as novelist, humanist, teacher, reader of scientific papers, Calvinist and Shakespeare scholar, there are a few sudden gifts as well – asides that sing the praises of the sermon as a rare cultural (as well as spiritual) experience, or offer fans of her fiction some gratifying insights into her writing process. “I feel a novel begin to cohere in my mind before I know much more about it than that it has the heft of a long narrative. This heft is a physical sensation.”

In The Givenness of Things, Robinson carries her characteristic refusal to recognise any gap between her indelibly theological view of the world and her mainstream secular audience to a new level. Like a theologian of old, like a twenty-first century Jonathan Edwards, she nonchalantly invokes concepts long out of use in public conversation. She muses, with unselfconscious seriousness, on questions of Christology or the workings of the Trinity in relation to urgent contemporary issues like the partisanship of American politics, or the travails of the modern university.

Some readers will find this refreshing; others, I imagine, quixotic or baffling. But then, I thought that about Gilead too, and it won the Pulitzer.

The pointy end of Robinson’s high view of humanity, rooted deeply in what she understands to be God’s high view of humanity – the imprint of his image in us – comes in her periodic excoriations of a public discourse that defaults so easily to contempt for other people. Her diagnosis of the problem leaves quite a few of us, on both sides of politics, pinned and wriggling on the wall – whether in Trump’s America or Operation-Sovereign-Borders Australia:

“Cultural pessimism is always fashionable, and, since we are human, there are always grounds for it. It has the negative consequence of depressing the level of aspiration, the sense of the possible. And from time to time it has the extremely negative consequence of encouraging a kind of somber panic, a collective dream-state in which recourse to terrible remedies is inspired by delusions of mortal threat. If there is anything in the life of any culture or period that gives good grounds for alarm, it is the rise of cultural pessimism, whose major passion is bitter hostility toward many or most of the people within the very culture the pessimists always feel they are intent on rescuing.”

Robinson refuses the role of Cassandra – she is adept at nailing the ailments of our collective life, but also manifests a steady optimism. The final essay in the volume, titled “Realism”, shows up the absurdity of our insistence that everything is bad – and getting worse – against indisputable facts.

She marshals the space program that has managed to send rovers to Mars, and the continued robustness of the publishing industry in an age we lament as incorrigibly capitalistic, against our unshakable convictions that we are a lazy, intellectually undisciplined people who never read books. For such things to happen, she notes, “many people have to have been doing many things right”. Why do we neglect to notice, let alone celebrate, victories like these?

Robinson’s insistence that we must see ourselves rightly – what we are as humans, and therefore what those others, who speak and vote and live all wrong, are too – works as an antidote to almost any intractable political dispute we could name. In The Givenness of Things, she throws her formidable weight as an essayist behind a more gracious, respectful, hopeful public culture and conversation:

“When panic on one side is creating alarm on the other, it is easy to forget that there are always as good grounds for optimism as for pessimism – exactly the same grounds, in fact – that is, because we are human. We still have every potential for good we have ever had, and the same presumptive claim to respect, our own respect and one another’s. We are still creatures of singular interest and value, agile of soul as we have always been and as we will continue to be even despite our errors and depredations, for as long as we abide on this earth. To value one another is our greatest safety, and to indulge in fear and contempt is our gravest error.”

This article first appeared at ABC Religion and Ethics.

Natasha Moore is a Research Fellow with the Centre for Public Christianity. She has a PhD in English from the University of Cambridge, and is the author of Victorian Poetry and Modern Life: The Unpoetical Age.