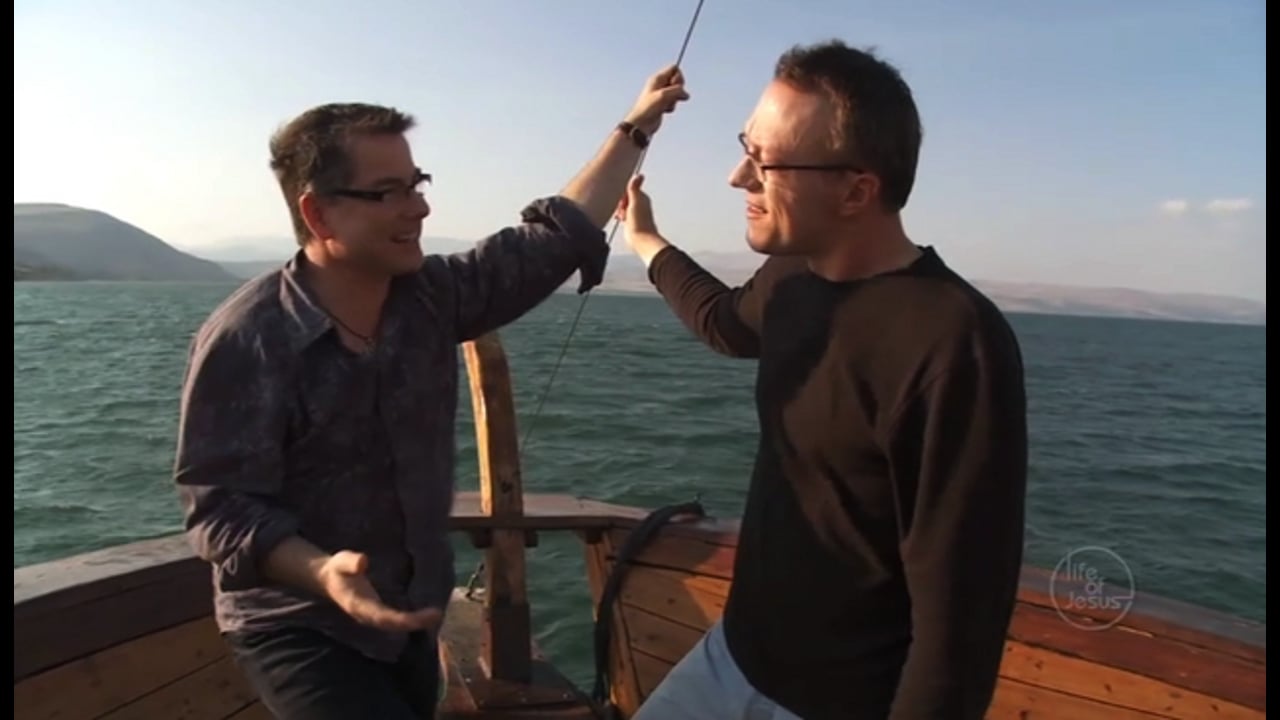 Behind the Life of Jesus: Did Jesus condemn wealth?

On the set of the Life of Jesus documentary, Greg Clarke and John Dickson discuss Jesus’ teachings about money, wealth, poverty, and generosity, and the mistakes Christians can make when interpreting these teachings.

JOHN DICKSON: I’ve wanted one of these for so long. It’s a shekel of Tyre: the purest silver coin in Antiquity, the only coin you could give in at the Jerusalem temple. And I was able to get one at a great antiquities dealer in Old Jerusalem just the other day. You were there to witness it.

GREG CLARKE: I was there, I heard you haggle for this thing. I have to say it made me think of all the teaching Jesus had done around this lake here about money.

GREG CLARKE: You know, his famous teaching of course is that it’s easier for a camel to get through the eye of a needle than for a rich man to get into the kingdom of God. Does that mean that Jesus was just incredibly anti-wealth?

JOHN DICKSON: Well that saying itself was probably a bit of a joke, at least a bit of hyperbole. But it’s probably also important to point out that as a Jew, Jesus wasn’t anti-wealth. That sort of idea of an ascetic who hates comfort isn’t the true Jesus at all. The Jewish view was that God made everything, everything is beautiful, everything is enjoyable, there to be had. There were limits on that, because a good thing can become a bad thing if it’s misused, but the basic Jewish view was: it’s good.

GREG CLARKE: But I think that teaching has been blown out of proportion often in church history though, I mean the church has been one of the wealthiest institutions at various times in history, and has hardly used its money well, and today you hear of certain kinds of prosperity teachings that say that Christianity is all about gathering wealth for yourself, you hear televangelists begging people for money through the TV screen and they’ll pray for you, and that just seems like a massive distortion of what you just said.

JOHN DICKSON: Well, in that context you need to hear the teaching of Jesus about the eye of the needle, because there was a similar thing going on in Jesus’ day amongst the religious elite, who were using their religious position for money. And that informs part of the context of Jesus’ denunciation of the wealthy – who were very often the religiously wealthy – so those kinds of Christians ought to watch out.

GREG CLARKE: Ok, but there’s the other extreme as well that Christians have sometimes taught, that poverty is a virtue, and really you ought to take a vow of poverty or live as frugally as you can because true spirituality has something to do with emptying yourself of the world’s positions. I mean, that too is kind of an exaggeration of Jesus’ teaching.

JOHN DICKSON: It is, and in history it was based on the belief that Jesus himself was a peasant, was a pauper, and so I need to take a vow of poverty like Jesus. But the more we know about the historical Jesus, the less plausible that is. He grew up in Nazareth, here in Galilee. Galilee itself was incredibly fertile and fruitful, and what we know of Nazareth now through the Nazareth farm project has shown us that these weren’t subsistence farmers, they weren’t on the poverty line at all. They were able to gain enough crop and wealth to actually engage in trade as well as just livelihood.

GREG CLARKE: So you’re saying, middle-class-ness, that’s the answer, that’s the true Christian path, is it?

JOHN DICKSON: Well, I wouldn’t want to say that either, I mean that would just be bringing our own perspective to the situation. It’s a case of trying to correct two extremes: all of creation is good, wealth is good but if wealth takes you away from God, if wealth takes you away from caring for others, then that’s when it becomes a root of all evil, to use that biblical phrase.

GREG CLARKE: So you’ve got to be rich towards God, which I take it means a kind of attitude that everything you have belongs to God to start with, and you use it in praise of God, and you use it in a way that you think is in keeping with God’s values, pursue his purposes.

JOHN DICKSON: That’s right, in Luke’s gospel, chapter 12, Jesus uses this phrase. He denounces a wealthy man who just stores up things for himself, and then Jesus says “but is not rich towards God”. I take it from that, that wealth per-se is not the problem, it’s having wealth but not having true spiritual wealth, not investing in the things that God wants you to invest in.

JOHN DICKSON: Oh no, not at all. It means to be investing in the things that God loves in this world, and part of that is giving to the poor, and in Luke 12 there’s a very clear statement that comes hot off the heels of this statement about being rich toward God, that says “Sell possessions and give to the poor”. So being rich towards God includes being generous. And here’s, I think, the key: poverty is not the virtue, generosity is. When you can learn to be generous with what God has given you, that’s when you’ve learnt the true teaching of Jesus.

GREG CLARKE: It makes me think of that other biblical saying that where your treasure is, that’s where your heart will be too.