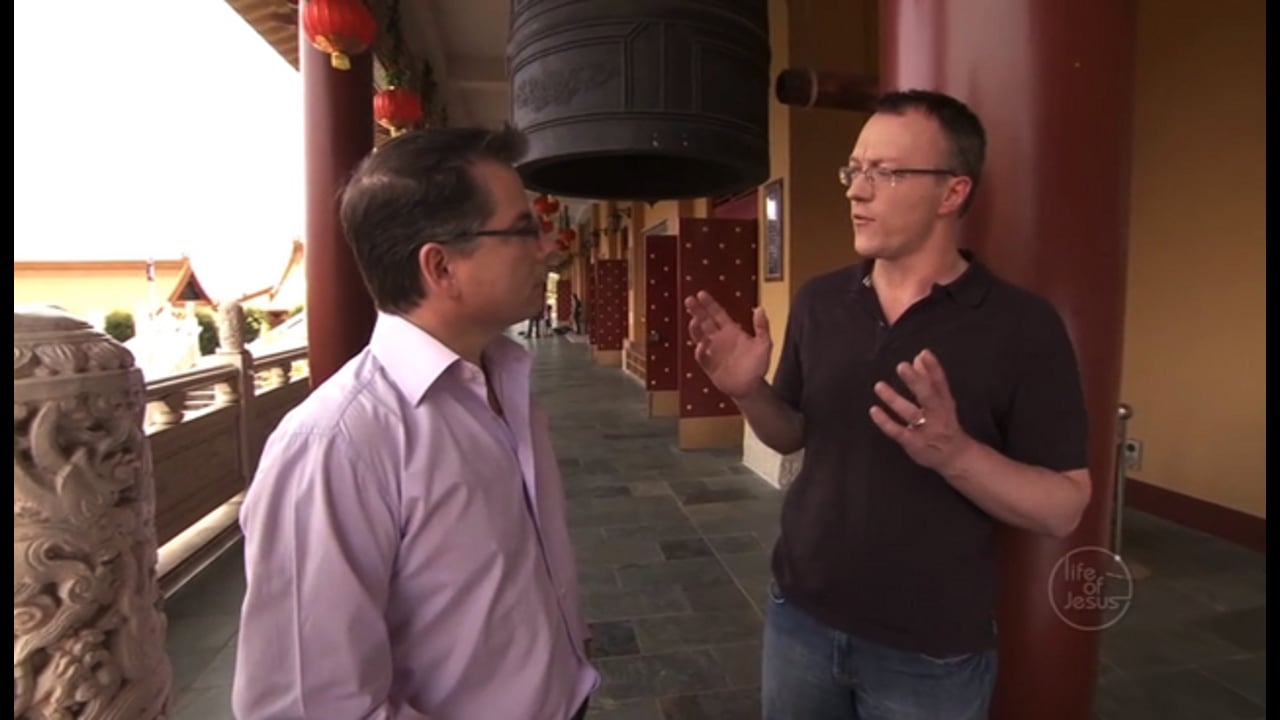 Behind the Life of Jesus: Is there a god?

John Dickson and Greg Clarke discuss whether there are things that might point us to belief in God.

Behind the Life of Jesus: Doesn’t the church abuse power?

John Dickson and Greg Clarke discuss whether there are things that might point us to belief in God.

On the set of the Life of Jesus documentary, John Dickson and Greg Clarke discuss the likelihood of God’s existence, and whether there are good reasons to believe in him.

JOHN DICKSON: Hi, John Dickson here from the Life of Jesus. The purpose of this whole project is to explore the life of Jesus in its historical context, and it’s important in the documentary proper to maintain the secular, historical approach to the man from Nazareth. But there’s no question that the story of Jesus has had a profound impact on the history of the world’s art, politics, ethics, philosophy and so-on. There’s also no question that the Jesus story itself raises philosophical questions about the meaning of life and ethics. So, we want to go behind the life of Jesus and explore some of these more profound ideas, and I can’t think of anyone I’d rather chat to than my academic colleague Dr Greg Clarke.

Greg, obviously the first question that the Jesus story raises is about the existence of God. It’s kind of true, isn’t it, that lots of people throughout history have shared that belief in some great mind?

GREG CLARKE: That’s certainly got to be our starting point, hasn’t it, because most people in most cultures at most times in history have had some kind of belief in a divine being or beings; some kind of great mind or power that’s behind everything.

JOHN DICKSON: I find it fascinating actually, I mean here we are at a Buddhist temple, and the Buddha himself was practically an atheist – he didn’t want to believe in God – but within a couple of hundred years, mainstream Buddhism starts to reintroduce the notion of deities.

GREG CLARKE: Right, and there’s this natural kind of human instinct that takes over, to think that there is a God, so we’ve got to really see whether there is any question, anything to doubt in that presumption. So, it’s always going to be really difficult to disprove God, to prove that God doesn’t exist, I mean you can’t really prove a negative, so we’re left asking questions like ‘Is it possible for God to exist?’ or ‘Is it likely that God exists?’

GREG CLARKE: You’re right, most people do think that it’s possible. Some people think that the fact that there’s evil and suffering in the world is enough to show that God could not exist; God couldn’t allow a world like this to exist. But most people even on that question are crying out to God; it makes them hungrier for God. It’s not a dis-proval of God’s existence, it makes you want to understand God better. So, we’re left really asking that question, ‘Is it likely that God exists?’ And I think it’s likely that God exists for a whole bunch of reasons. Let me just give you a few of them.

The first one is that God really is the best explanation for why there’s something here, rather than nothing. I mean, proposing that there’s an eternal being that is the reason for the universe actually makes a lot more sense that saying it just spontaneously, somehow, occurred – I mean that is just less rational. Secondly, I think that the kind of universe we see with its extraordinarily complex arrangements, its wonder, its beauty, its depth – you just don’t get those kinds of universes by chance. I mean there hasn’t really been enough time, even with processes like gradual evolution, for such a universe to have come about by chance – a universe that’s filled with intelligence, people like you and like me who can understand the universe – we just have an excess of intelligence, and it’s really hard to explain that unless you propose that there’s some mind behind it, rather than just mindless chance. Thirdly I think, when you look at the universe, it’s just the kind of place you’d expect to find if God is real, and it’s the kind of place you wouldn’t expect to find if there’s no god. I mean, things like human conscience – we have a sense of right and wrong, a sense that what we do matters – these things make more sense if there’s someone behind the universe to whom we are accountable. Things like our sense of meaning and purpose, I mean most human beings think that the world is meaningful rather than meaningless, and this draws us back to someone, some mind, who is generating the meaning.

JOHN DICKSON: But some would say that just evolved with us as a natural byproduct of our evolution.

GREG CLARKE: Well, there may be something to that, but the kind of things you find in the world and in human experience are the sort of things you don’t expect to find if the world is just mindless evolution; they’re the sort of things you do expect to find if there’s a god, and reason, behind it all. So, other things like the fact we have a fear of death and a sense of eternity, these are all things that point us back towards God, and I find when you add these things all together, there’s a great likelihood that God is real.