Christmas story offers hope of resilience against all odds

Simon Smart asks suffering believers around the world what Christmas means to them.

As we hurtle through December each year there are fewer and fewer nods to the original heart of Christmas, the baby born in a manger. Christ has been replaced with an X, “Silent Night” with “Santa Claus is Coming to Town”, and “Merry Christmas” with “Happy Holidays” lest anyone be offended.  Very occasionally you might get a card with a nativity scene wishing you ‘peace and joy’ to round out your year.

But this year, with the shadow of terrorism and the spectre of environmental and economic disaster hanging over the West, what does a wish of ‘peace and joy’ even mean? I asked Christian believers whose personal circumstances look anything but peaceful or joyous to find out what Christmas 2015 means to them. 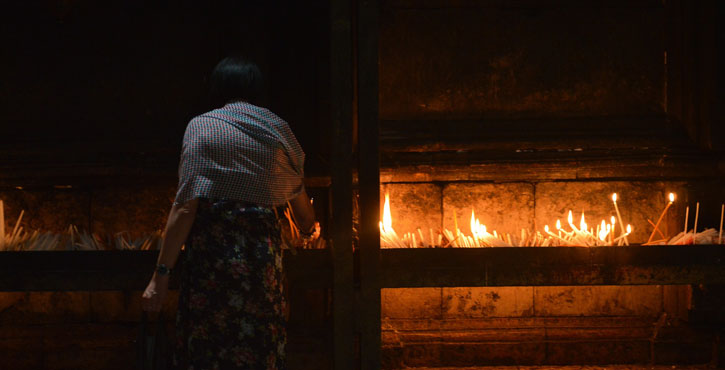 Baptist Pastor Yakob K* oversees a church in the Syrian capital Damascus. Nearly one third of Syria’s 600,000 Christians have already fled the country. Four and a half years into an appalling civil conflict that shows no signs of abating, “Bereavement has become a nation-wide phenomenon. Every Syrian family [has] lost at least a loved one,” says Yakob. He describes existence in his country now as “a turmoil” by which life has lost its “aroma”.

Christmas day still encapsulates a “thrilling” promise according to Yakob, but whereas it was once a time of visits among friends and relatives, today it is a much more private and sombre affair. It’s advisable to stay at home, says Yakob, as now “bombs might be the replacement of presents and gifts”.

This year, after a morning service, Yakob will visit the sick and bereaved, offering comfort and a sense that, despite appearances to the contrary, the Christmas story makes every bit of difference in both this life and into the next.

Further north in the city of Aleppo, which since 2012 has been divided between government forces on the western half and rebels on the east, life is full of fearful uncertainty and foreboding. ISIS controls territory to the east and northeast of the city. Heavy fighting is taking place in the surrounding province.

Marwat M* is an Armenian pastor who has stayed in the city while most others like him have left. He was in Lebanon on a monthly visit to his wife and children when I spoke with him via Skype.

Aleppo has just passed the 50th day without electricity. For nine months there has been no Internet. Fuel and water is in short supply. Temperatures are freezing at night and blankets are now being distributed to offer some comfort. “There is no joy for the children as it is very unsafe for them to go outside and play,” says Marwat. “The economy is very bad and the cost of everything has escalated about six to eight times more.  The churches are still holding services but the mood of the people in general is hopeless because we don’t know where we are heading.”

Coming up to Christmas it’s understandably an enormous challenge to support and inspire a people for whom the dream of any future has been replaced with uncertainty about the next few hours let alone days. “Humanly speaking it is not easy for me to give hope in a hopeless situation, but at the same time celebrating Christmas, Jesus’ birth and the Prince of Peace, brings us inner hope and inner peace,” says Marwat.

When I ask whether he ever feels like his God has abandoned him, he responds with the kind of perspective that explains why he stayed when most other clerics left. “The [conflict] is because of human brutality,” he insists. “My hope is that people will not lose their faith despite all these disturbances.”

Closer to home, there are plenty of people for whom Christmas is not all fun and games but nonetheless they discover in it more than simply a quaint tale of shepherds and donkeys. Angie K* spent twenty years in jail for murder and was released in 2011. Sexually abused by her own father from the age of four until she was fifteen, Angie says she was an alcoholic by the time she was nine and heavily into drugs by fifteen. By twenty-five her life had spiralled out of control. She found God sixteen years into her sentence, having gone through the Kairos prison ministries course. These days she spends her time supporting women who have come out of prison as they adjust to life on the outside.

It is a mixture of joy and of peace. It is very hard to explain to people … It surpasses all understanding.

Of her former life Angie says she had built up a tough exterior that was hard to break down. “I was angry. I kept a wall up around me and wouldn’t let anyone close.” As she came to know the women who visited her each week from the Kairos program, Angie very slowly began to change. “I thought to myself that they had something that I wanted,” she says.

“For God to forgive you, you’ve got to forgive others and let go,” she says. “You must let go of anger and bitterness and forgive those people who have hurt you.  I was able to forgive my father for what he had done to me all those years.  That’s how I know there is a God because that’s when I started really healing and having inner peace.”

Christmas in prison, says Angie, can be “a very lonely time” but it came to offer a profound sense of possibility and new beginnings. “It is a mixture of joy and of peace. It is very hard to explain to people because it is something you have to feel or experience.  It surpasses all understanding.  It is like you don’t need to be afraid of anything; there is a real calm that comes to you and a flow of love.”

And what about those living with the uncertainty of displacement? David N* is seeking asylum in Australia. He comes from the small and troubled east African republic of Burundi, next door to Rwanda. Devastated by civil wars, tribal conflict and extreme poverty, Burundi is a place many seek to escape. Today, far from family and all that’s familiar, David lives with the anxiety of not knowing whether he will be embraced or rejected by the country in which he seeks refuge.

For him, the Christmas story offers something that transcends even his current testing circumstances. “[On Christmas day] I will be praising and thanking God; spending time with friends,” he says. Offering an explanation for his astonishingly positive demeanour, David is quick to attribute it to his life-long faith. “I have just come to a place of trusting Him in every situation. Having Jesus is having new life. Having Jesus is having hope.”

Is it a false hope? For these four individuals, caught up in circumstances or conflicts out of their control, the story of Christmas really is something to hold on to. It’s not sentimental but hard edged. It has given them courage in the face of barbarity, peace in place of uncertainty, and lives transformed out of darkness, violence and brutality.  For them the old story is something real. It has moved them, against the odds, out of despair and into a life-affirming place. No doubt that’s something plenty of us could do with as we approach whatever our particular challenge is this festive season.

Simon Smart is director of the Centre for Public Christianity.

This is an extended version of an article that first appeared in the Sydney Morning Herald.