Easter, My Lai, and the Mysterious Victory of the Cross

Easter in Australia is mostly about (frequently sodden) camping holidays, a few days off and, with light fading and the first hints of winter in the air, the strange comfort of hot cross buns and chocolate.

But there is a more serious side to the original Easter story that these days is barely noticed beneath the brightly decorated eggs, early season footy and the respite of a four-day weekend. Within Christianity a necessary precursor to the more joyous Easter Sunday is sombre Good Friday with services that speak of the darkness of life—of failure and sorrow and regret. It’s about the problem of evil. 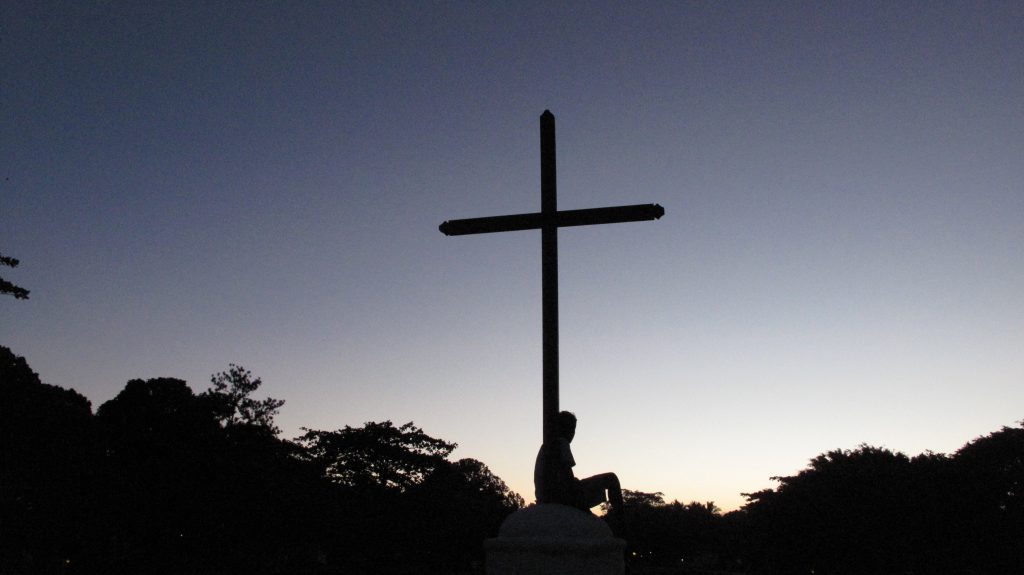 A few weeks ago marked the 45th anniversary of the My Lai massacre. On the 16th March 1968, two weeks after I was born, 120 American infantrymen from ‘Charlie Company,’ attacked the Vietnamese village of My Lai where they thought, wrongly, that a Vietcong battalion was based.

The story is grimly familiar. Charlie Company went on a rampage. In four hours, nearly 500 villagers—mostly women, children and old men—were killed. Some had their scalps cut off, others their hands and feet and tongues. Pregnant women had their stomachs slashed open and were left to die.

Those responsible were normal young American men. They were brought up in average American homes. Once news of this event came out, the tide of public opinion turned against the war.

And there are too many similar accounts that have emerged from conflicts in the years since. What is perhaps most disturbing about these incidents is that they are not drawn from some ancient barbaric past but recent memory, and were carried out by people who mostly lived unremarkable, regular lives.

They are a reminder that, given the right circumstances, all kinds of people are capable of all kinds of evil and cruelty.

The concept of evil might sound a bit dated these days, but it’s revealing that many of our greatest artists and writers, from Shakespeare to Dostoyevsky to Cormack Macarthy have found it necessary to plumb the depths of this topic. It appears to them to be such an unavoidable question and an area of deep human complexity that it demands attention. Most have recognised evil to not only be a reality but, at least to some extent, to reside within each of us. Russian dissident Alexander Solzhenitsyn wrote that, “the line dividing good and evil cuts through the heart of every human being”.

You won’t get that kind of thinking from the modern self-help gurus and those intent on relentless optimism regarding human goodness. But such assessments of human nature not only fail miserably to account for human history, but also the problem of evil that we all must face.

Jesus’ crucifixion and his resurrection tell us of God’s mastery over evil and his plan to ultimately defeat it once and for all.

American author Frederick Buechner says that when the Christian story turns its light on us it is bad news before it is good news: “It is the news that man is a sinner, to use the old word, that he is evil in the imagination of his heart, that when he looks in the mirror all in a lather what he sees is at least eight parts chicken, phoney, slob.” But while Christianity depicts evil as a serious problem it also offers hope. Buechner adds that the Gospel narrative is also the news that us “slobs and phoneys” are “loved anyway, cherished, forgiven, bleeding to be sure, but also bled for”.

“The impenetrable mystery of evil meets the paradoxical mystery of the cross,” is how French theologian Henri Blocher puts it. For those still convinced by the veracity of the gospels, Jesus’ crucifixion and his resurrection tell us of God’s mastery over evil and his plan to ultimately defeat it once and for all.

That’s what will be being preached in churches this weekend if you are tempted to look in. Through what looks like the ultimate defeat, the cross, evil is crushed, turned back on itself, conquered in the end by love and self-sacrifice.

It’s not until we face the reality of “Friday” that the full joy of resurrection Sunday becomes apparent.

That is real joy as opposed to the limited and superficial optimism to which our culture appears prone. Easter is the news that while evil is all too real, both around us, and to some extent within us, there exists in the Christ story a defiant hope and a promise of ultimate justice, restoration and the renewal of all things. And it’s the notion that God is not indifferent to human struggle and pain. It’s a vision that will still have the capacity to inspire countless millions around the world this Sunday.

Simon Smart is a Director of the Centre for Public Christianity and the co-author with Jane Caro, Antony Loewenstein, and Rachel Woodlock of the upcoming, “For God’s Sake – an Atheist, a Jew, a Christian and a Muslim debate religion.

This article originally appeared in ABC’s The Drum.