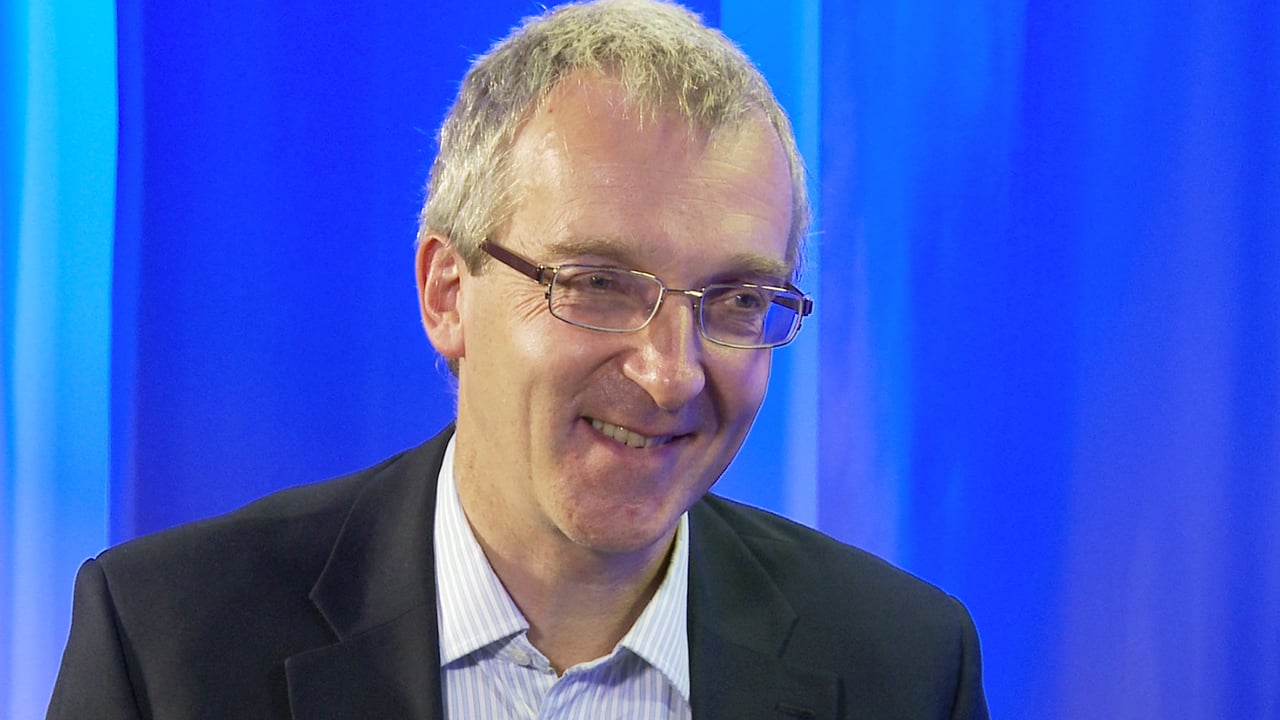 Tom McLeish is a theoretical physicist at Durham University and the author of Faith and Wisdom in Science. We asked our Facebook Friends what questions we should ask him – here are his answers.

SIMON SMART: OK, so we are now attempting to go through a whole list of questions that came to us on Facebook for Tom McLeish. Looking forward to this. Should be fun Tom. Michael Wells says: What excites you about physics? What’s your coolest physics moment?

TOM MCLEISH: Oh, physics is at the heart  of all science, its the most fundamental science and it digs to the fundamental laws that make everything else work. That’s what I love about physics.

SIMON SMART: Do you have a special moment in your career that you thought – this is the coolest thing I’ve ever done?

TOM MCLEISH: Yes, I burst into tears once when someone showed me a graph. I had a theory for ten years about what a special experiment on a molecule would show if we could make a molecule of a particular shape, the shape of a rugby goal post. But it took years for me to be able to work with chemists, really brilliant chemists who could make the molecule and then another long time to do the careful measurement. The people in the lab never told me that we were getting near the end of the measurement. At the end of one of our group meetings he brought me this graph, thinking that I’d like to see it. In my mind for ten years I had this shape; it had a peak and another big hump ... and I knew this shape, I had it in my mind for years, and there was experimental data from this material that followed exactly that shape. There’s something about, my goodness, we can understand the world so closely that we can actually predict things like what would happen if we created this thing. It was a complete surprise and in front of all my group, very embarrassing, I just burst into tears.

SIMON SMART: OK, that is a cool moment. Luke Barnes asks this: How should we think about the laws of nature? Are they governing principles imposed from the outside? Are they patterns in the mosaic? Are they powers and liabilities of natural things?

TOM MCLEISH: This guy should do a philosophy degree, straight away, that's my first answer to the question! It’s a very delicate question. Maybe he has. Laws, I think, are problematic. We only started thinking about laws for physics about the beginning of the modern period. There are other ways of thinking about the operations of nature. But I don’t think they are just short hand coding for experimental behaviour. I do think that what we call laws of physics correspond to something out there in the real world, that’s deep and structural. Although we must remember that the laws themselves exist up here, not there. The way that we formulate they are in our mind, they are not in nature. But I do think they correspond to something that is in nature.

SIMON SMART: Thankyou. Philip Brian said this: Do you believe in Darwinian evolution or an evolutionary theory as accepted by the general science community and, if so, why did God intervene three billion years or so after life started evolving on earth only once and only on this planet when there may be a billion others, fourteen billion years after the known observable universe evolved? I suppose he’s getting to that sort of extravagance of the time involved in this. Why bother waiting that long?

TOM MCLEISH: There are two questions there, aren’t there. Do I believe what evolution is? It is an extraordinary and beautiful insight into the way that life, the living system, the whole living system, explores its possible spaces. So, yes, the short hand answer is that I do believe in Darwinian evolution. Have we crossed every T and dotted every I in the theory? Well, no, because we are learning all sorts of things about post-translation modification, epigenetics. We are adding to it. By the way, I don’t know where Philip is coming from but I don’t find any contradiction between evolution and the story of the Bible. If we honour the Bible properly for what it is and we read all the creation stories from Genesis through Psalms, Wisdom literature, Job, the New Testament too, we find all sorts of different languages used in the context of their own times to motivate us to open our minds and look at the world. And we can discover these things for ourselves so that’s not an issue for me at all. Now the second question is – why then this particular event in this huge mass of space and time? Well, I think we get confused between significance and size sometimes. Does size matter? Always? Is 13 billion years a long time or a short time? Compared to what? Obviously compared to a human lifetime, maybe, but why is the human lifespan the key measuring stick for time? Why is the radius of the earth the key measuring stick for the cosmos? And I don’t see why apriori there can’t be a particular place with a particular task?

SIMON SMART: Well I don’t think we’ve ever had to consider the question of whether size matters at CPX before but thank you for that. Paul Graham asks: Would any scientific cosmological theory such as the parallel universes cause you to give up on your Christianity?

TOM MCLEISH: That’s a great question. I am open to evidence that would cause me to give up on my Christianity because I don’t think that Christianity is something that one believes in spite of the evidence. I suppose there would be – I can’t actually imagine one now but that is because my imagination isn’t as strong as it should be. If there were strong evidence, say if time travel could take me back to ancient Israel and I saw Jesus’s body being stolen and there wasn’t a resurrection at all I think game over.

SIMON SMART: Cecily Thew Patterson asks this: Do you personally have doubts regarding your faith and if so, what are they based on?

TOM MCLEISH: Cecily, thank you. I think we all have personal doubts. I have a good go at being an atheist every so often. It’s a little discipline that I exercise. But that’s not a doubt, it’s a self-enforced doubt. I make myself have doubts because I want to do sanity checks the whole time. Maybe all my atheist colleagues and friends are right. So let me go and jump into their world system as much as I can and believe it and ask – is this making sense? Perhaps in answer to the previous question – that will be the thing that one day I will think, ah yes, this is better or no, this is clearer, I can see much clearer now. I think that is a risk that those who are honest about our faith commitments really have to take. I have doubts about how well I’m obeying God, how well I’m carrying out his command to love my neighbour as myself, to love him. I have huge doubts about how well I’m doing that. But we all have those doubts and we all need to go through the experience of being forgiven and getting up on our feet again every day.

SIMON SMART: On the flip side of this, Richard Morrison asks: Do you have doubts regarding your science?

SIMON SMART: That's part of the business, isn't it?

TOM MCLEISH: Yeah, that’s part of the business. So the potentially sceptical view that I have of my faith comes from the fact that I’m just one person. I don’t divide my brain between a way I go about science and the scepticism I apply there, including the self-scepticism ... I have over my faith. Having said that, I know that if I don’t support my scientific ideas nobody else will. So there is a phase, I have to be absolutely honest, in which I sort of irrationally find myself falling in love with my scientific ideas because I need to support them. To see if I can help them grow up a bit until they can defend themselves. Philosophers of science have written about this and they know that this is true. Paul Feyerabend and Lakatos are two people who have written 20th-century books about how scientific method needs a little dose of irrationality for awhile. But that’s because of self-doubt. Of course we doubt whether our scientific ideas are right. A bit of faith in science.

SIMON SMART: Ok and then the last one, from Jennifer, says: How has your study of science influenced your faith and vice-versa?

TOM MCLEISH: Great question Jennifer, thank you. My study of science has shown me how extraordinary the world is and how deep it is and shown me how breathtakingly incomprehensible it is to me that we have minds that understand it. Because that resonates with so much of what we’ve been talking about wisdom in the Bible, look at Job. God knows the way to wisdom because he looks into his creation and sees the water and the winds and measures them and weighs them. If God can do that then we can do that with him. That’s shone light on my faith and the science that I do. It’s part of the thing that the Bible calls wisdom. The other way around, science can’t of itself tell us what we should do in the world. How much of the world should we change? Which drugs should we develop for which disease? How should we relate science to the economy? How do we look after forests? All those questions are detailed questions under the big question of, how do we do science in the most fruitful and beneficial way, not just for a narrow Western, Northern, me, selfish end, but for the good of humanity and the balance of creation. Those are questions which I think a Christian mind in public affairs can really help society at large with.

SIMON SMART: Thank you very much to everyone who contributed a question. We tried to get through as many as we could. You did a great job there, we worked you hard Tom. Thanks so much for all your work.

TOM MCLEISH: They were great questions. Thanks everyone for sending them in.