Simon Smart reviews Higher Ground and the portrait of Christianity it provides.

Skimming through some work by an atheist writer recently I came across the line, “There can be no more chilling sentence in the English language than, ‘our next hymn will be Shine Jesus Shine’”! I snorted with laughter at this, knowing something of the pain associated with such a declaration.

I’m sure I’m not alone among those who grew up in churches in the 1970s and 80s in having an aversion to, what I remember as, schmalzy Christian praise music. Perhaps I am just recalling an awkward stage of life (and faith), but whatever the reason for cringing at these traumatic memories, I felt something of the same when going to see Higher Ground.

The film, based on a memoir by Carolyn Briggs, who also wrote the screenplay, tells the story of a woman who finds faith within a very conservative Christian community in the 70s and then gradually, painfully begins to lose that faith.

Directed by Vera Farmiga who also plays the central character Corinne Walker, Higher Ground maps a long spiritual journey of Corinne and her husband Ethan. When the young couple’s infant daughter narrowly survives a calamitous bus accident, they interpret the event as God having saved their child and so they dedicate their lives to him in response.

While there are some undeniably touching moments as the couple are initiated into the community of believers, it’s hard to escape the feeling that their individuality and personhood is being absorbed into the larger group and is in danger of being erased.

A deep spiritual struggle for Corinne ensues as she wrestles with wanting to experience God in her life but mostly feeling his absence. The pain and frustration of this is captured with pathos. Unsurprisingly a heavy price is paid in terms of marriage, family and friendships.

This is an excellent directorial debut by Farmiga. The film is well constructed, the acting is convincing and the characters believable. It’s beautifully shot and evenly paced. The story is very moving in places and these scenes are handled with subtlety devoid of sentimentality.

The film has been praised for its avoidance of caricatures and tired stereotypes but in reality, it takes its place in a long line of films that present Christian faith and practice as at best quaint and misguided, and in this case strange and life-suppressing.

There is precious little in this depiction of a Christian community that could be considered attractive. Virtually all of the characters are comically conservative. Each female is dressed head to toe in a dowdy floral dress, and older women chastise Corinne for wearing an outfit that reveals her bare shoulders.

The men sit in groups to learn, from taped lectures, how to please their wives sexually. Meanwhile, the world of Woodstock and the excesses of the 60s and 70s lie somewhere beyond the bounds of this pietistic coterie. The contrast looks absurd.

There’s a harsh judgementalism among the faithful that contrasts starkly with those outside the flock. The characters deal with life’s ups and downs with platitudes and by quoting Bible verses out of context. And when real, catastrophic, crisis strikes they meet it with glib phrases and a robotic fatalistic earnestness. 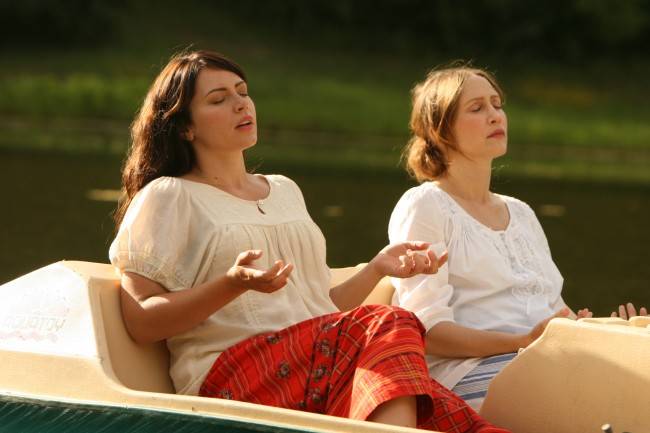 It’s all sickly sweet and folksy (yes, even Kum be Yah makes an appearance), with a view of the world outside the community that is thought of as utterly of the devil.

When one of the women bakes a morning tea of chocolate cup cakes, they turn out to be not chocolate but carob, and hence no one wants them. Here we get a window into the filmmaker’s view of life in this religious community—it’s not the real thing. It’s a poor substitute. They are missing out.

Suffocating formality appears likely to crush the life out of Corinne, who gives the impression of a dynamic, lively woman on the edge of breaking free of religious strictures and oppressiveness.

And as she does manage to extricate herself from her faith community, she begins to discover literature and art and poetry and the ‘colour’ of life, moving further from her bland and cloistered existence.

Sadly, Higher Ground probably accurately portrays what many people have experienced in the church. I don’t question Farmiga’s fidelity to the memoir and it’s to her credit that she is able to convey Corinne’s genuine personal struggle as well as what she stands to lose if she does walk out on her life. It’s far from a total victory for scepticism.

But believers among the audience will protest that the heart of Christian faith is not on show here, but like the carob cup cakes, merely a flimsy imitation.

The Christian worldview affirms life in its fullness including the joys of literature and the arts, as well as beauty and food; laughter and fun, and the physical “stuff” of living. It is, after all, the story that begins with a God who creates the physical world and calls it “good”.

But, importantly, Christianity also faces the reality of suffering and injustice and the agonies of the human experience, not with simplistic fatalism, nor with naïve and superficial optimism, but genuine hope. This is a hope that refuses to give in to despair, because it trusts in a promise of future redemption; a future that also infuses the present with meaning.

None of this is on display in Higher Ground, which is why by the end you couldn’t blame viewers wanting to celebrate Corinne spreading her wings to find life, freedom and something authentic.