In all the destruction at the Notre Dame, one photo stood out

Simon Smart on how one photo that stood out from the Notre Dame Fire perfectly captures the Easter message.

“April is the cruellest month” wrote TS Eliot in The Wasteland, and so it has proven to be in Paris.

Images of Notre Dame Cathedral engulfed in flames sent shockwaves around the world this week, and no doubt a dagger into the heart of something essential in the French psyche.

It’s hard to comprehend the magnitude of the loss that encapsulates centuries of beauty and sacred memory, art and architectural triumph; a rare sense of solidity amid endless change.

“It feels like the end of everything. Europe cries,” tweeted Carl Bildt, the co-chair of the European Council on Foreign Relations.

And of course, the sense of loss runs much wider than only the residents of Paris or the people of France.

American journalist Dan Rather wrote this week: “Why has the burning of Notre Dame moved so many? Because we believe in beauty, majesty, faith, art, history, and the human expressions thereof. We recognise in this cathedral our common humanity. A scar now emerges in our connections to our past, our future, and each other”.

One photo stood out

On the day of the fire, jolting pictures and video of the spire collapsing, the roof ablaze, were posted alongside people’s snaps and memories of their visits to the famed old edifice.

But one image — reproduced here — stood out as perfectly capturing the Easter message that has been celebrated in that Cathedral for over 800 years. 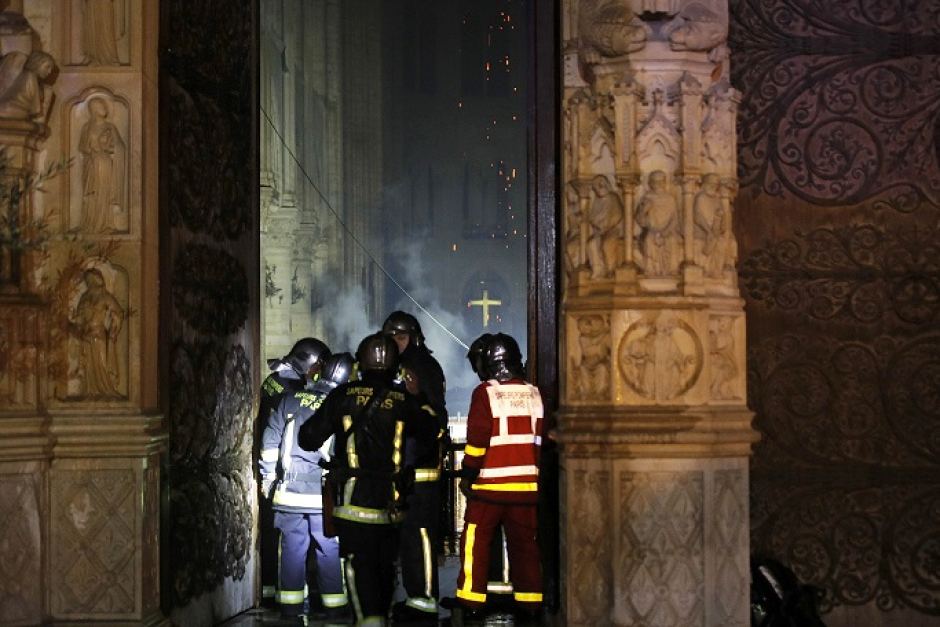 In this image bewildered Parisian firefighters stand at the doorway to the Cathedral, staring into the vast cavernous, sacred space, now blackened with rising smoke and lit by falling embers.

In the distance a lone, white cross is illuminated against the blackened background of ruin. It is hauntingly apt.

Good Friday is all about desolation. It’s about shattered lives and heartbreak. It’s about lost dreams and things that are destroyed and can’t be put back.

When from the cross, Jesus is recorded quoting psalm 22, “My God, My God, why have you forsaken me?” he is echoing a cry that has, in one way or another, been uttered by all people in the face of life’s all too real and inevitable torments.

And perhaps the destruction of Notre Dame will come to be seen as broadly symbolic of the perilous state of a civilisation lurching into troubled and fearful waters.

The spectre of environmental catastrophe looms over a younger generation who feel powerless to impact necessary change. Polarising political forces drive us into tribes of enmity and suspicion, countering our best instincts for community and unity.

Terrorism and economic uncertainty, disillusionment with once trusted institutions, and an epidemic of depression and anxiety mark these times.

When, in a country like Australia, the biggest killer of people under 40 is suicide, clearly all is not well, despite seemingly endless prosperity and material gain.

But if the destruction of Notre Dame is somehow representative of something broader, it’s worth remembering Notre Dame Cathedral has been rebuilt before.

The French Revolution in the 18th century brought calamity to the building, destroying the original spire constructed in the 13th Century.

Victor Hugo’s famous novel The Hunchback of Notre-Dame, published in 1831, reinvigorated interest in the crumbling Cathedral and a 20-year project from the 1840s created Notre Dame as we knew it before this week’s fire.

That stark image of the cross illuminated against the blackened background is a fitting symbol of the Easter story.

Mending and healing. Restoration and return and rebuilding. That is the hope of Easter Sunday and its answer to the bleakness of Good Friday.

To people who know all too well the darkness of Good Friday, this story claims to offer the possibility of redemption and new beginnings; the possibility of abundant life emerging from desolation. British writer Francis Spufford sums up the Christian message in this way: “Far more can be mended than you know.”

Mending and healing. Restoration and return and rebuilding. That is the hope of Easter Sunday and its answer to the bleakness of Good Friday.

Late in the day of the fire in Paris, video emerged of people kneeling in the streets watching their beloved building burn.

They sang hymns. Ava Maria and others. It was intensely moving and tragically beautiful. A sign of defiant hope in the face of heartache.

Perhaps TS Eliot was thinking of something like this when, at the close of The Wasteland, he wrote: “These fragments I have shored against my ruins.”

Fragments that carry with them signs of life and love and the potential for mending.

That would be a fitting theme for Easter services, not only along the Seine river, but in all parts of the world this weekend.

Simon Smart is the Executive Director of the Centre for Public Christianity and co-host of the historical documentary For the Love of God: How the church is better and worse than you ever imagined.