The song explores a life that takes place in ‘a pretty house’ with a ‘pretty garden’ but, as the chorus repeats with haunting, escalating angst, there are ‘no alarms and no surprises.’ At its dramatic conclusion, the song descends into chaotic, discordant noise containing the desperate refrain ‘let me out of here.’ It’s a portrait that neatly reflects the shape of Revolutionary Road the film adaptation of Richard Yates’ novel from 1961, starring Kate Winslet and Leonardo DiCaprio.

Winslet has already been acclaimed for her performance, and rightly so, but DiCaprio is at least her equal in depicting with raw and jolting honesty this modern tragedy of a relationship being wrenched apart.

Set in Connecticut in the 1950s Revolutionary Road delivers a story of life in the suburbs for middle class America, where grey-suited male commuters pour into trains to travel to the city for uninspiring and repetitive work, leaving their stay-at-home and increasingly desperate wives to tend to domestic duties. For director Sam Mendes (married to Winslet) this is familiar territory after his highly successful American Beauty explored the thin veneer of respectability overlaying the anomie of suburban existence in 1990s Middle America.

Our early encounter with Frank and April Wheeler is by way of flashback to a couple enthralled by each other’s uniqueness and creative spirit. Together they feel special.  ‘I think you are the most interesting person I’ve ever met,’ she tells him. They plan a life of adventure, travel, and varied experience. ‘I want to feel things, really feel them?’ says Frank. After marrying they settle into life in suburbs determined to be different to those around them, but soon find themselves sucked into a vortex of responsibility and crippling, suffocating routine.

Mendes evokes the 1950s atmosphere skilfully—the formal dress, daytime martinis and endless smoking combined with décor that these days is retro cool, but in this context is relentlessly plain. Post-war optimism and burgeoning technology deliver the hopes and disappointments of modern consumerism.

There are echoes here of Betty Friedan’s Feminine Mystique and the now classic image of a 1950s housewife isolated, bored and diminished, turning to increasingly damaging ways of breaking the monotony. Surrounding the Wheelers are couples who lead bland lives in a monoculture of stifling conformity. It is only petty gossip that adds any spice to an otherwise humdrum existence. ‘Look at us,’ cries an ever-more agitated April. ‘We’re just like everyone else … We’ve bought into the same ridiculous delusion … that you have to resign from life.’ A scene depicting the couple walking silently down a long, sterile corridor serves as a telling symbol of where they are headed.

It’s a longing to re-capture the sense of vitality—of being fully awake, that sparks a dream for April that they sell the house, Frank quit his job and move the family to Paris. ‘People are alive there, not like here’ Frank had once told her.’ As the idea germinates in her head she seeks to make it reality with hurried determination. Frank takes some convincing but once on board, life takes on a different hue for both of them. It is at this point in the story when the dream is alive that they are at their best together—animated, excited and in love again.

Of course ‘Paris’ is a metaphor here. It could have been anywhere that provided escape, risk, and freedom. For a time it looked like the romantic journey might become reality. But circumstances conspire against them. Reality strikes a blow. April begins to implode.

As things unravel the viewer is given a disturbing portrait of a marriage wracked with resentment, regret, missed opportunities and betrayal. There is an aching sadness that comes from the knowledge that they still love each other, but that love is slowly being choked out of them, overtaken by their individual fears and broken dreams.

Many elements explored in the film give an old story universal appeal. Winslet and Dicaprio bring to life the tension between our public faces and hidden realities with explosive authenticity—shattering a façade of respectability, niceness and control. 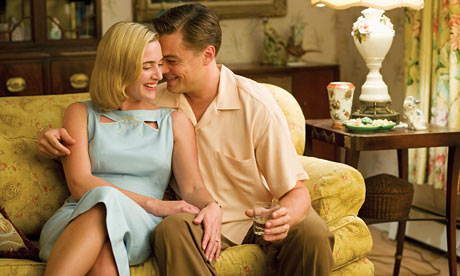 Ever-present is a desire for honesty, truth, real life, passion and feeling along with the pain when that is lost. Infidelity too is a key element of the story. This is not merely marital unfaithfulness but the emptiness associated with our essential selves being consumed by life’s circumstances. It is April who most desires to re-claim that part of her nature. We can all appreciate the struggle, but the way she goes about this will divide the opinions of viewers.

The film tells this story with intelligence. It hits some high notes with unforced elegance and style and it is easy to see why it has many admirers among the critics. It is however a dark tale that lacks any obvious redemptive element and in that sense is unsatisfying. Director Sam Mendes says ‘these characters are longing for something. They just don’t know what it is,’ and this is as true of them at the end as it is at the beginning.

The Christian vision of the world has something to say about this story and others like it. It by no means offers simple answers to life’s very real predicaments. Nor does it suggest that those who adopt it will be saved from such maladies. But it does hold out the hope of something different; of transformation, forgiveness and love.

The Jesus of the gospels is no shrinking violet. He lives a radically different life and he urges his followers to do the same—constantly warning them of the dangers of the love of money and possessions. April’s rejection of the stultifying consumerist lifestyle that surrounds her, and her desire for ‘more than this’ is both perceptive and courageous.

But equally discernable is the reality that different chapters of life offer particular challenges. Sometimes the beauty is to be found not in running away, but embracing life as you find it—perhaps in the suburbs and a humdrum existence. The children of this family are conspicuously absent from most scenes and that is telling. Deep down April must know that in Paris there will still be rubbish bins to be put out. Children will still need to be bathed and fed. But the idea of God’s Kingdom brought to earth in the life of Jesus, if it’s true, gives every small part of life eternal significance. It’s what American writer Frederick Buechner calls ‘the muffled presence of the holy’ in the every day. Buechner writes:

According to Buechner it is knowing the creator and aligning ourselves with his purposes and designs that can imbue even the mundane tasks of daily living with meaning and vitality. That’s a vision of life that, once captured, can be as surprising as it is enlivening.

Simon Smart is a Director at CPX