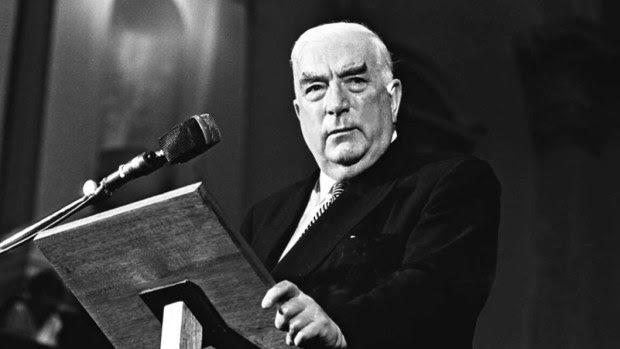 Menzies would open the door to those fleeing the Taliban

As Scott Morrison grapples with the heart-wrenching turmoil of Afghanistan, he should look to the lions of his own political party and listen to the call of faith.
On September 27, 1959, prime minister Robert Menzies lauded Australia’s settlement of 200,000 refugees and celebrated our achievement of leading the world on a per capita basis. “It is a good thing that Australia should have earned a reputation for a sensitive understanding for the problems of people in other lands (the innocent victims of conflicts and upheavals),” Menzies said. “We should not come to be regarded as a people detached from the miseries of the world … for I believe that there are no people anywhere with warmer hearts and more generous impulses.”

Standing in that Menzian tradition was John Howard who, as prime minister in 1999, airlifted 4000 Albanian Kosovars here and resettled them.
On August 18, Morrison refused to increase the humanitarian intake for Afghan refugees. He promised 3000 places within the current humanitarian cap of 13,750 for Afghans. Unfortunately, this amounts to little more than displacement as it comes at the cost of other desperate people waiting in the queue. Nations like Britain and Canada have promised an extra 20,000 places for Afghans, but not us. Just a shuffle of our existing program with no extra numbers, at no extra cost.

Compounding this was the way perpetual anxieties about borders were invoked, rather than the terrible existential scenes we are witnessing in Afghanistan. Morrison said: “The government’s policy has not changed, will not change. I want to send a very clear message to people smugglers in the region that nothing has changed. I will not give you a product to sell and take advantage of people’s misery.” Somehow this has become all about us.
While the Prime Minister and former immigration minister promises that Afghans already here and on temporary protection visas won’t be sent back, he will not promise permanent visas. Many of these people have been waiting seven years. However, our Prime Minister will not address their long-term fears because they have not “come the right way”. Many are Shia Hazaras, deeply hated by the Sunni Taliban, which is why they fled here in the first place.
For a party that so honours its founder, this is a radical break with the Menzian tradition. In my view it is also a radical break with the understanding that Christian faith is primarily internationalist and not narrowly nationalist and all about us. Neither Jew, nor Greek, but all one.

Standing in that Menzian tradition was John Howard who, as prime minister in 1999, airlifted 4000 Albanian Kosovars here and resettled them. Howard spoke of the need for an affluent nation such as Australia to be seen to be generous. Of course, there were many struggles over refugee policy under Howard. However, his legacy on the Kosovar refugees was consistent with the Menzian tradition.

In 2014, prime minister Tony Abbott cut the aid budget by nearly $1.5 billion. One year later, he initially resisted taking in extra Syrian refugees. However, as the full scale of a war that claimed 600,000 lives and displaced 12 million people became apparent, Liberal MPs such as Craig Laundy eventually prevailed. Abbott created an additional 12,000 places for Syrian refugees. It was one of the last acts of his prime ministership but landed in the right place – firmly within the Menzian tradition.

Other Liberals of devout Christian faith such as then NSW premier Mike Baird were influential. He said after the decision: “I am thrilled to hear that 12,000 will soon be able to find safety on our shores. Something is happening here in Australia. People have united behind the simple idea that our boundless plains are here to be shared especially with those in desperate need.” Baird also tapped into Menzies’ belief that Australia’s reputation would be seen through our actions as people of warm and generous hearts.

And this reputation was a shared bipartisan view by our leaders. On the other side of politics, who can forget Bob Hawke’s tears after the Tiananmen massacre? He immediately allowed 42,000 Chinese students to stay.

There is no doubt the Bible is not a policy document (as Christian politicians are fond of saying). It certainly does not stipulate humanitarian policy quotas. However, it is radical in its acceptance of the stranger (refugee) and why God’s heart is particularly set for their plight. Indeed, it delivers an abundantly clear call to abandon nationalist fears and to show costly hospitality to those in need of shelter. This carries right through to Jesus whose family flees a massacre of all innocent boys under two at his birth to be a refugee in Egypt.
Both Menzies and Christ light a moral path forward. Australia and its leaders must embark on that course.

Tim Costello is the Director of Ethical Voice Pty Ltd, Executive Director of Micah Australia, and a Senior Fellow of Centre for Public Christianity. This article first appeared in the Financial Review.