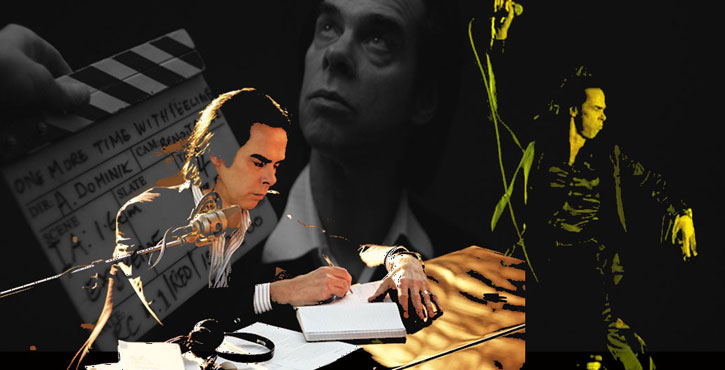 Nick Cave and the trauma that stopped him telling stories

It's going to take a few days to recover from seeing One More Time With Feeling. The film companion to Nick Cave’s new album, Skeleton Tree, is 112 minutes of guilt, emptiness and boundless loss. In these black and white frames, we meet an artist who, far from the macabre crooner we once knew and feared, now stands before us without swagger, without irony, without any posing.

Following the accidental death of his 15-year-old son, Arthur, Nick Cave doesn't have energy for any of that trivia now. What's left is a musician and a poet who, perhaps alone amongst his peers, is able to talk about the pervasive trauma of death and a God who must be there, but is impossibly far away.

Arthur’s death is never addressed head on – he is only mentioned by name when his Mother, Susie Bick, shows a painting of the sea he'd done as a child – but the sense of Arthur's absence is always present. This film is for those devoted to Cave, and it’s assumed we already know how the teen had, like thousands before him, experimented with some drugs, then done something reckless. A bad trip, a misjudgment, a moment of disorientation – a beloved son, lifeless at the bottom of the cliffs of Ovingdean Gap in East Sussex.

On that day, Cave lost more than a cherished son. Through the interviews in studios, snatched conversations at lunch tables, monologues in taxis and (most powerfully) in songs, we see that Cave has lost a way of being in the world.

He’s questioning the artistic vision he has pursued for four decades – that it’s possible to weave a narrative, invite listeners into it, even become it.

In his previous film, 20,000 Days on Earth, Cave gets in a conversation with the actor Ray Winstone, and admits that he has created a story for himself. “It’s all an invention”, he says, staring through the windshield of the Jaguar XJ he is driving.

In another scene, his friend Kylie Minogue, sitting on the back seat as she is chauffeured by Cave, says that she read his biography and Cave tut tuts, saying, “Oh, you read that? It wasn’t true.” Even the God he famously sings about, interventionist or not, is an artistic construction, as he explains to his psychoanalyst:

“I have a kind of weird relationship with the idea of God because within my songwriting, some kind of being exists. Someone taking score. In the real world I don’t believe in such a thing.”

Cave once gave a more formal statement of his approach at the Vienna Poetry Festival in 1998. In his lecture titled “Flesh Made Word” he explains that for him, almost like the great Danish existentialist Christian Søren Kierkegaard, God was and is a wholly subjective experience. The Divine is not some out-there, formal, rational proposition, He is immediate, emotional, and entirely personal:

The approach has served him well as a writer and performer. However, in One More Time with Feeling we get the hint this curated narrative, the subjectively cultivated vision of God, and of himself, is beginning to fray. After the deep, visceral impact of loss, the construct simply can’t hold up. In this film, Cave is no longer in the driver's seat. He is no longer in control. Instead we see Cave stare backwards from his taxi seat, then ask the viewer a rhetorical question:

“What happens when an event occurs that is so catastrophic that you just change? You change from the known person to an unknown person, so that you look at yourself in the mirror, you recognise the person that you were but the person inside the skin is a different person.”

Artifice is collapsing for this artist. So the songs aren’t hiding behind a gothic character, as with “Where the Wild Roses Grow”, or within elaborate extended metaphors, like his much-loved “Ship Song”. Instead, the prose is prosaic, the thoughts raw, the ideas are obvious and thud down before us.

“If you want to bleed, just leave”, he sings in “Girl in Amber.”

“Come over here and sit down and say a prayer. A prayer to the air, the air that we breathe”, he pleads in “Anthrocene”.

“Nothing really matters, nothing really matters when the one you love is gone” is a line that you might feel lacks craft in the song “I need you”, but by now, you’re starting to see the point. This is a writer who knows he can’t write his way out of this corner. He’s lost faith in narrative itself.

But it’s in the penultimate “Distant Sky” that we see the full survey of destruction. Not just of human loss. But of an entire epistemic system. One that shows the subjectively-based worldview, one where our generated narrative, the one that’s meant to create all the meaning we need, is shown to be so many matchsticks.

Given the devastating personal loss in his life, Nick Cave's album was never going to be business as usual. But he hasn't turned to the interior life here – he seems to be reaching out. There's barely a melody in these songs. And the harmony is in the common experience of human suffering.

His eyes may be puffy but his gaze was never clearer, never more convincing. We’ve never known him better.

One More Time with Feeling is a powerful, personal film. And for those who aren’t just amused by Nick Cave, but feel an affection for him, it is undoubtedly a turning point. But in which direction?

Does Cave now, having conjured up the Divine through almost all his work, in the face of this irreparable trauma, now abandon God? Does the poet who has mined the love song, deeper than any other current recording artist, now give up on love – the love that has allowed him to be so deeply hurt by loss?

The film directed by Andrew Dominik, I think shows us which way the song will turn for this one-time chorister from Holy Trinity Cathedral in Wangaratta.  And it won’t be into a more elaborate form of art.

From the start of the film, we hear mistakes, out-takes, cameramen struggling to work the machine. One reviewer, writing for Variety, regarded this as “a promising conceit, executed in a slapdash, haphazard manner”. In making such dismissive remarks, he entirely missed the point. Cave, and the people he collaborates with, are giving up on craft, on technique, on the carefully honed story. Because that has failed.

In its place we see unguarded encounters. Where once we expected to see the scowl and perfectly pressed suit on Cave, we instead find him tenderly talking with his wife, Susie, bringing her a smile. Hugging his surviving son, Arthur's brother, singing with him. But perhaps most touchingly of all, abandoning all the cool he once displayed with his band mates, like the resplendently hairy violinist, Warren Ellis; where there may have once been aloofness, there is gentleness. Ellis’ forest of mane make him more like a Elijah than ever. But with his cross ever dangling into his chest, he is also a present Christ. Not judging, always comforting, standing alongside Cave at his most wounded, most fragile. John the Apostle taught, no one has ever seen God, but if we love one another, God lives in us. And God seems to be showing his kindness to Cave through people like Ellis. Right down to the mundane moments, like when Cave is worried about his ageing appearance, Ellis assures him he has “never looked better”.

And it’s true. Cave may be a broken man. His eyes may be puffy but his gaze was never clearer, never more convincing. We’ve never known him better. He has swept away the broken narratives, the subjective constructs philosophers called the phenomenological. And he is opening himself to the real, the thing that is there in itself; the noumena. He will have to abandon the Christ of self-mythologising of course. But it may be that he can know the Christ of history. Not the Christ of narrative, but of flesh and blood. This is the one his own friends spoke of, saying they were eyewitnesses to his catastrophic death, but also to what they described as a resurrection. And it may be this great Australian creative force may know the God, not of imagination, but the Creator himself, who once lost a Son to real violence; a Father who knows the reality of the pain Cave can sing, I think, better than anyone.

Matt Busby Andrews is a creative consultant, an Honours graduate in philosophy and an Associate Fellow at the Centre for Public Christianity.