Readable, well-researched and expansive in its coverage, The Happy Economist by Economics Editor of the Sydney Morning Herald, Ross Gittins, is refreshingly unpredictable. Gittins’ critique of mainstream economics, which borders on the iconoclastic, will surprise some readers. 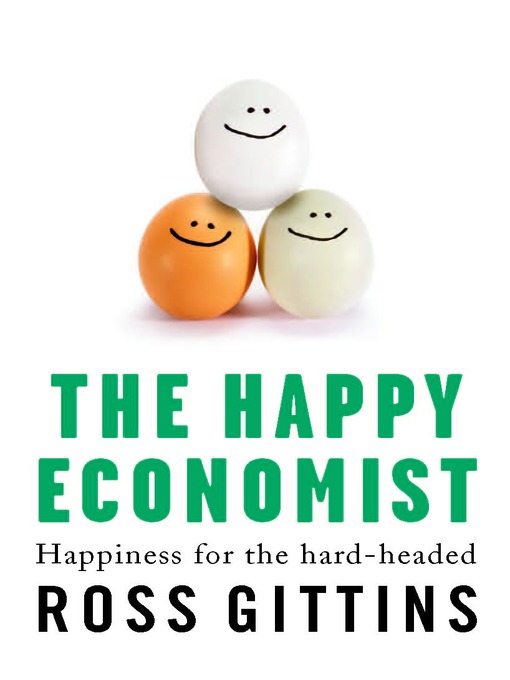 Gittins splits his argument, and his book, into two parts. Part One on ‘Micro-happiness’ is about happiness at the individual level. He draws on evolutionary theory, brain psychology and the Positive Psychology of Martin Seligman to discuss our quest for happiness. Gittins wants to correct the anthropology implicit in mainstream economics that suggests humans are emotionless and super rational (i.e cold and calculating), before closing off Part One with a checklist chapter How to be Happy. A Christian reader will be find a lot to agree with here – the centrality of relationships to life, the value of self control, and the disappointing nature of pursuing wealth for its own sake.

Gittins’ sources are eclectic. He draws on research by Michael Schluter, head of the Relationships Foundation—an influential Christian thinktank in the UK. He gleans from them the notion that relationships are a key, and often neglected, dimension of personal and social well-being. For example, Schluter was involved in a UK campaign against deregulated shopping hours called ‘keep Sunday special’, an idea Gittins speaks approvingly of.

Also discussed are insights on human nature coming out of evolutionary research that suggests we ‘live in the space age with stone age brains’. He suggests that people are very bad at predicting their happiness. They pursue things like wealth, but then are dissatisfied upon ‘arrival’. This, says Gittins, is because it suits our evolution’s survival purpose to have us go on and continue to strive for other things.

While he gives some interesting insights into the link between relationships and survival, I have some reservations. Evolutionary stories about human development are hard to test experimentally. Part of the problem is that, contrary to Gittins’ estimation, evolution does not predict that every trait observed has survival value. All that is required is that what is observed is not too bad for survival. Thus, one never knows on evolutionary criteria whether a trait is an accident, or has been selected for.

Another problem is that it is not always easy to be objective about survival value. If we observed that people were satisfied with attaining wealth, we could perhaps appeal to evolution for that observed reality too, since in some environments we could claim that wealth has survival value.

Gittins would nevertheless agree with the Christian assessment of the disappointing nature of wealth to truly satisfy. Christianity would add that the accumulation of wealth is often about our desire to deify ourselves and thus is one expression of a number of illegitimate strategies for achieving power. Money and wealth is not only a source of power, in a Christian world view, it can become a competitor god – an idol. It has to be tamed by generosity, and gratitude, something Gittins would agree with. Otherwise the love of it is the root of all kinds of evil (1 Tim. 6:10) and dissatisfaction when one has achieved opulence is a realistic possibility.

In Part Two, ‘Macro-happiness’, the main thrust is a negative critique of economic growth. The argument here is partly theoretical, but its pragmatic strength lies in the risk of a looming environmental crisis. This crisis, thinks Gittins, will ultimately lead to an unreformed Economics losing the public policy battle about economic growth:

At a number of places in the book, Gittins sides with critiques of economics that have appeared in the academic literature, but which do not appear as part of the public face of Economics. I find myself in substantive agreement:

As an economist, there was a lot to like in Gittins’ book. As a Christian, it left me pondering the quest for happiness in its modern form. Christians are not masochists – the doctrine of creation bids us to enjoy it (1 Tim. 4:4). There is much in the Christian worldview that would affirm creation as a gift to celebrate in, to care for and to joyfully engage with. But that’s not the whole picture. The New Testament also calls for self denial, suffering and sacrifice (1 Peter 1: 6-9) as vital part of a meaningful life. It is this element that is hard to completely square with the supposed ‘right’ to pursue happiness expressed in the American Constitution, and affirmed in The Happy Economist.

Yet Gittins is close to a Christian understanding of the good life at one point when he writes that happiness evades those who seek it too directly – the so-called teleological paradox. A Christian would say that those who seek God find that other things in their life – the whole tapestry of joy and sadness – come together to make for true human fulfilment.

Dr Gordon Menzies is a Senior Lecturer in Economics at the University of Technology, Sydney, a research affiliate for the Centre for Applied Macroeconomic Analysis at the Australian National University, and, Deputy Director of the Paul Woolley Centre for Capital Market Dysfunctionality at UTS.