Selfies, identity and the things that last

Pope Francis transcends the me,me,me focus of the contemporary selfie.

How can one photographic image cause Twitter to crash? Such was the case at this year’s Oscar celebrations when host, Ellen DeGeneres, constructed a selfie around some of Hollywood’s biggest names. Twitter went into meltdown and the image now holds the record for being the most “favorited” – over 1.4 million. The “selfie” has now become one of the cultural touchstones of the moment.

Recently, the esteemed Oxford Dictionary added the word “selfie” to its realm. Not only was it added, but it was deemed significant enough to be identified as the “word of the year”[1] , nudging out other contenders such as “twerking”…thankfully. Even the most limited of excursions into the world of social media will testify to the expansive presence of the selfie. Platforms such as Instagram and Snapchat have complemented Facebook and Google+, enabling us to pose, shoot and post with a few flicks of our thumb – easy, instant, personal, ubiquitous. 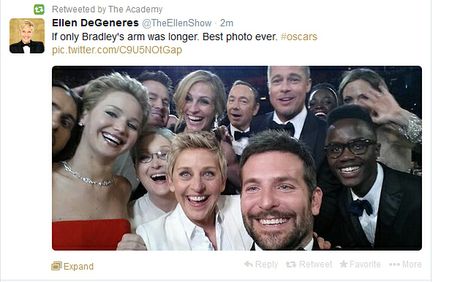 There is something curious about the nature of selfies, and sociologists and psychologists are having animated discussions about it: what does it say about human identity if the “self” is repeatedly the dominant, or only, subject in an image? Many selfies seek to reference the photographer (the “self”) in ways that do not necessarily reference any photographic subject beyond her or him. The close framing, especially of the face and torso, don’t leave much room in the photo for capturing the surrounding setting, thereby helping to provide a broader context to the “self”. A selfie might be taken in a person’s bedroom or the local shopping mall – it’s often hard to tell where the subject is even located. It might be hard to determine the time of day, or if there is anyone else around in the world referenced by the image. The capturing of oneself, and not necessarily anything else, seems the prime function of many selfies. This begs the question, “What is a selfie for?”

Could it be that the zeitgeist of the selfie is a quest for certainty? Posting dozens, or even hundreds, of selfies might at least assure us we exist, even if, in the case of Snapchat, for only a fleeting moment. If I tag myself, or if others “like”, “Tweet” or “share” my photo, then I must have some meaning and value. It all sounds remarkably like the plaintive cry of Vladimir in the closing moments of Samuel Beckett’s “Waiting for Godot”. After meeting the Boy again, and realising that Godot has not, and will not come, Vladimir yearns for affirmation that his existence is real. For the deflated Vladimir, his existence will not be confirmed by the appearance of Godot, so he pleads with the Boy to acknowledge that at least he exists:

It is as if the Boy’s temporary acknowledgement may have to suffice; Beckett suggests there is nothing more certain beyond what can be seen and experienced in the transitory moment. As the play concludes, the audience is left pondering the teasing conclusion that nothing beyond ourselves and our direct experience can produce purpose and meaning. Perhaps it is so, too, with the selfie, especially now that the esteemed Oxford lexicographers have endorsed it.

An astonishing selfie recently surfaced in the most unexpected of places and invoked the most extraordinary reaction. The Twittersphere went into hyperdrive over no less significant a figure as Pope Francis and his taking of a selfie during a private audience with some young people.[3] The pontiff has already notched up a significant photographic oeuvre as subject, including photos of his graciousness to a young boy who breached protocol by sitting on the Pope’s throne[4] , and of his deep compassion by publically embracing a disfigured man during his weekly audience.[5] It was the pontifical selfie, however, which boosted his reputation even amongst the Church’s hostile critics. The pontiff reportedly confessed, said the UK’s The Telegraph, that his motivation for taking the photo was indeed “selfish”.

But Pope Francis’ selfishness seems to be of a quite different nature than that reflected in many selfies. His rationale for meeting with the young people, as well as appearing in the photo, was to encourage them for their future and to do something of significance in the world. According to The Telegraph, he told them to:

Make the future with beauty, with goodness and truth…Have courage. Go forward.[6]

It’s hardly reflective of the “look at me, look at me” attitude so pervasive in a selfie. It may also in part account for the extraordinary decision by Time magazine to name Pope Francis its Person of the Year for 2013.[7]

Since his election to the papacy in March 2013, Pope Francis has brought greater emphasis to the merciful and compassionate expressions of Christian faith. In quick time, he has been lauded for calling his flock or leaving them personalised voicemail messages when he couldn’t get through, for reaching out to the disfigured, the prisoners, the poor, and for shunning many of the trappings of rarified office. Even those who are critics of the Vatican and its mission have found it hard to argue with his generosity, his warmth, his compassion and his humility. In a recent homily, the pontiff noted that humility is at the core of the Christian life; by contrast, a lack of humility “brings you to the road of sufficiency, of vanity, of pride [and] is not from Jesus”.[8]

These are powerful words not normally heard in public discourse. How refreshing it is that such noble and culturally confronting words have been recognised and affirmed by a high profile non-religious media accolade. The juxtaposition of the Oxford Dictionary and Time Magazine is captivating; “selfie” describes the phenomena of social self-absorption, contrasted with Pope Francis’ winsome generosity and “otherness”. The selfie will no doubt pass into social and cultural history, as is the nature of ephemera. The vision of life demonstrated by Pope Francis, however, will continue to ennoble and uplift; it has been this way for millennia, ever since the pontiff’s inspiration and model, Jesus of Nazareth, spent his life in service to and for the benefit of others.

Paul Kidson is Principal of St Paul’s Grammar School. He has a life-long love of literature and drama.