The Call of the Void

Natasha Moore on vertigo, fear, safety, adventure, and the thirst for wildness in relation to a new film: Mountain.

A confession: I am terribly afraid of heights. If anything, I think it gets worse as I get older – though I have, for the most part, shed my childhood horror of open tread stairs.

But over the years, I’ve noticed that “fear of heights” doesn’t really cover it. It’s erratic, this leaden feeling, the dizziness and dread.

If I’m entirely enclosed – in a glass lift, or on a viewing platform with a high fence – I find height exhilarating. But if the window is open, if the balcony is high, I can’t go near the edge. The mental slideshow of the jump, the fall, is too vivid.

I am not suicidal. And yet, this picture. This impulse. Where does it come from? 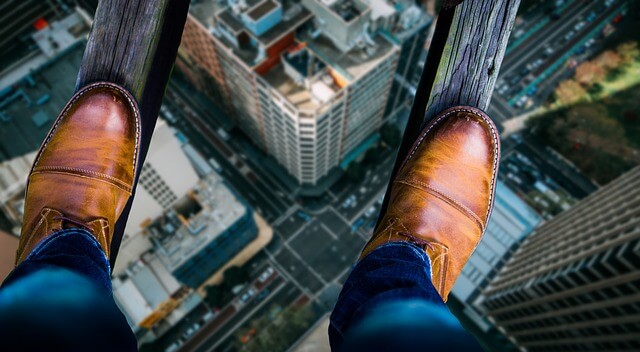 It’s always cheering to know that somewhere, someone has coined a term for that feeling you think you shouldn’t have. Perhaps you’re not crazy after all. Or at least, not alone.

In this case, a group of psychologists at Florida State University surveyed 431 undergrads and discovered that “High Place Phenomenon (HPP)” was not uncommon, and not (necessarily) related to suicidal ideation. I found the title of the paper – “An urge to jump affirms the urge to live” – reassuring.

The French have another term for it: l’appel du vide. The call of the void. It is probably more accurate (as well as more lyrical) than HPP, because anyone who experiences this will tell you that it doesn’t just happen atop buildings and cliffs. To stand on a train platform as the train pulls in – or especially, screams past – is to battle that same horror: the urge to jump, and the desire to live.

I’ve conducted no studies, but I suspect that the real root of this impulse is the appalled realisation that there is nothing to stop me from jumping. (Except my command of my own body and mental state, of course. And who can trust that?) In a country with stringent health and safety standards, we find ourselves hedged round with railings and warning signs and safety catches and redundancies. Mostly, I don’t need to exercise my own capacity for not throwing myself off things; it’s done for me. Which may make those situations where it’s possible to self-destruct all the more palpable.

Safety and danger, height, fear, the siren song of the old Freudian death wish: these were the elements that jostled in my mind as I watched Mountain, enthralled and unnerved in equal measure.

Mountain is a documentary, but it’s not much like other documentaries. A collaboration between the Australian Chamber Orchestra (ACO) and award-winning director Jen Peedom (Sherpa), it features a spare, stunning script by Robert Macfarlane (author of Mountains of the Mind), voiced by Willem Dafoe, and footage gleaned from cinematographers all over the world. The result is dazzlingly beautiful, and consistently surprising. The film traces our relatively recent, and far from universal, obsession with mountains: “To those who are enthralled by mountains, their wonder is beyond all dispute. To those who are not, their allure is a kind of madness.”

300 years ago, we learn, nobody would have dreamed of climbing a mountain. The heights were holy, and/or hostile. You steered clear. Life had enough dangers, was precarious enough, without seeking out more risk, more ways to die.

Mountain traces some reasons for the shift, and hints at others. The desire to “conquer” mountains emerged out of the age of exploration, as “the blank spaces of the world were filled in” and the heights, too, became subject to the human desire to know, to master.

The increasing lure of mountains in tandem with the increasing comfort and safety of many people’s everyday lives is also noted. “We seek out danger,” Dafoe intones, just a fleck of archness in his voice. “We court danger. We pay for it.” Pay for it in both senses: how many documentaries need specify that “no fatalities are shown on screen“?

While some of the film’s most heart-stopping footage is of the extreme sports variety – heli-skiing, base jumping – the intermittent narration is hardly adulatory. The business of jumping out of helicopters or cycling off cliffs is at least partly that: business. Big brands and online views have as much to do with it as some quest of the human spirit. “Those who travel to mountain tops,” Dafoe declaims, “are half in love with themselves … and half in love with oblivion.”

And the powerful human urge to domesticate, to make safe, has a way of catching up to the human yearning for wildness, risk, adventure. Mountain bends its avid gaze not only on the most extreme environments but also the ski slopes of Europe and the “modern industry of ascent,” ground zero of which is Everest Base Camp: “This isn’t climbing anymore. It’s queuing.”

In some ways, Mountain pulls away from the human. It has no plot, no characters and almost no identified settings. Nations, borders, seasons, human worship or human antics: the peaks transcend them all, unmoved, immoveable.

But at the same time, as a viewing experience, Mountain is movingly human. The vistas of rock, ice, soaring peaks, flowing magma, are thrilling to behold – but it doesn’t take long before the eye is roving, searching each landscape for a human figure to rest on. Scale, too, becomes disorienting (is it a footprint? is it a crater?) without one of our own kind to serve as a focal point. The difference between watching an avalanche, and watching an avalanche with a person in it – seeking that speck as it surfaces or is engulfed – is instructive.

The film itself accepts, even foregrounds, this tension. It is a hymn of praise to majestic, indifferent nature; but it opens not on some dramatic, dizzying panorama but with a more intimate sequence, as the instruments of the ACO are tuned, the microphones tested. It is a moment that grounds us not only in the human world, but self-consciously in the act of making. Drones may give us unprecedented visual access to the peaks of the world, but no technology exempts us from the lens of our own species. Mountain comes to us mediated, curated and partly about the inevitability of our own self-preoccupation. 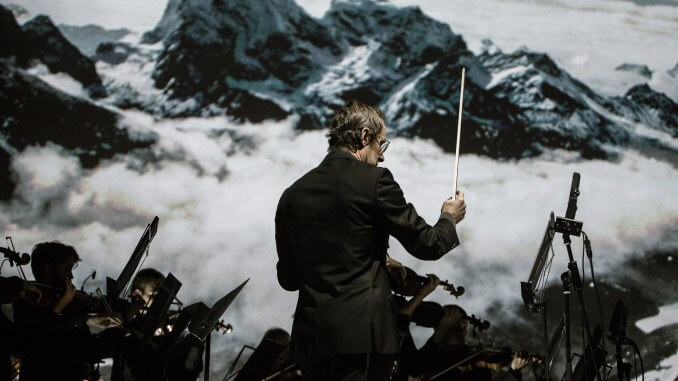 We need the wildness and the wonder of mountains, the film concludes, “more than ever.” They don’t need us, but in our cushioned existences, they are salutary reminders of a world inconceivably bigger than ourselves, transcendent in a more-than-literal sense. This sweeping survey of our relationship with the planet’s highest points is both gorgeous and disturbing: l’appel du vide, the call of the void, unpacked at leisure over 74 minutes of joy, sublimity, awe, sheer terror, self-forgetfulness and self-recognition.

Mountain is showing at selected cinemas around Australia from 21 September 2017.