Prayer for the Commission into child abuse

Twelve months into the Royal Commission into Institutional Responses to Child Sexual Abuse, how are Christians to respond to the […]

Twelve months into the Royal Commission into Institutional Responses to Child Sexual Abuse, how are Christians to respond to the overwhelming evidence of extensive, long term failures on the part of churches to guard and care for those about whom Jesus Christ declared, “Let the little children come to me, and do not stop them; for it is to such as these that the kingdom of heaven belongs” (Matthew 19:14)?

The Commission was established by the Australian Government in January 2013, following widespread community concern that Australia’s institutions, including churches, had failed to protect children from abuse and failed to respond appropriately to allegations of abuse. Six commissioners were appointed, headed by Justice Peter McClellan AM, a Judge of Appeal in New South Wales. What they have uncovered is difficult to fathom.

Words will not suffice. There can be no defence or minimisation. Even an apology will sound hopelessly inadequate given the weight of sorrow the Commission is bringing to light. Conscious of this, the Centre for Public Christianity offers the following prayer for the Royal Commission, seeking God’s blessing on the commissioners’ work, his care for victims of abuse, and his refining mercy upon Christian communities everywhere. Even if there is nothing the church can plausibly say on this matter to the wider community, Christians remain confident that their Creator and Saviour stands ready to hear their plea. It is the Centre’s hope that individuals, churches and organisations will commit afresh to prayer for this important period in our national story. 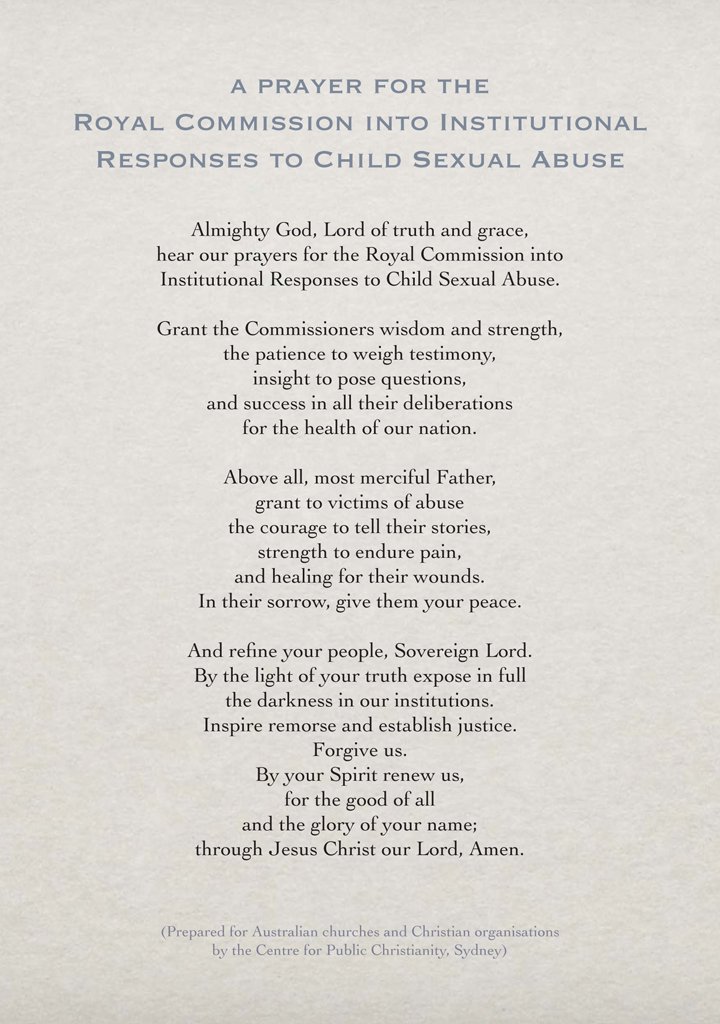