A tale for this week of death and resurrection

Laurel Moffatt on loss, death, destruction, and resurrection in light of the Notre Dame Cathedral Fire.

Like most people who have travelled to Paris, I’ve visited Notre Dame and walked up and down the side aisles admiring the Cathedral and the artworks it held. I studied the Rose Window and failed to comprehend how anything so beautiful, so breakable, had ever been created and then hung to float in stone. How was it still there? Like those whose shoulders I brushed, I enjoyed those moments of meeting the medieval sublime and feeling dwarfed in a space so vast. How very sad to think of it all burning. 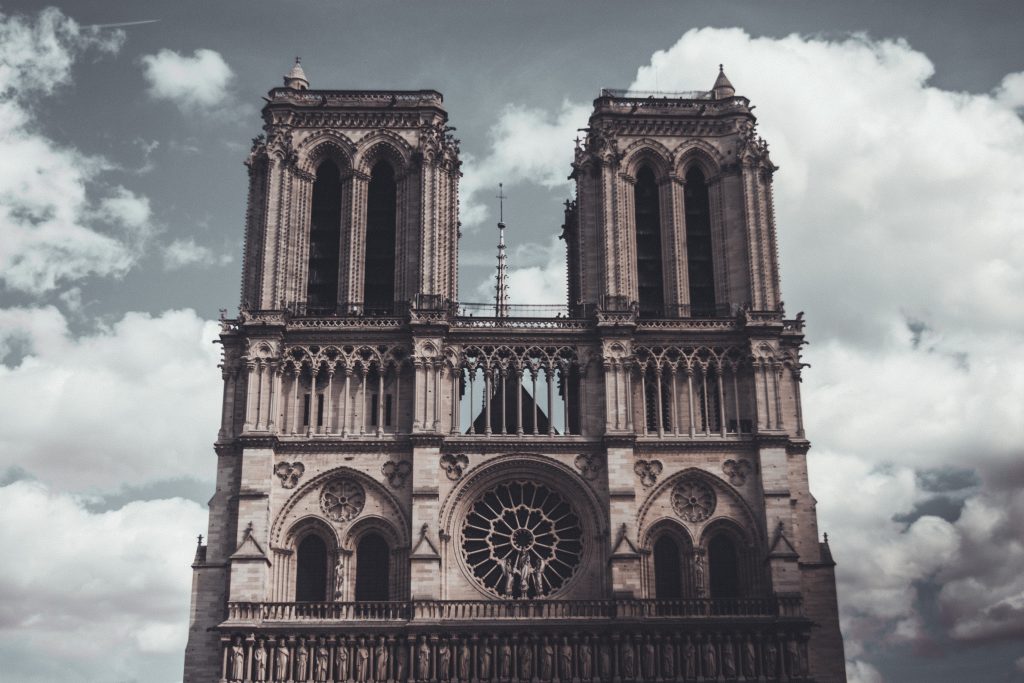 Notre Dame, more than most buildings, is a symbol rich with meaning. It is both a national and civic symbol, claimed by both Paris and France. It is where monarchs were crowned and revolutionaries sought spoils, and for many Parisians, Our Lady of Paris is where the heart of the city beats.

The significance of Notre Dame is not bound by place, of course. As a feat of architecture and engineering that began in the High Middle Ages and completed in the Late, it is a symbol of human ingenuity and skill, expressed in that time and place as the fruition of knowledge that had existed before it. It became (what had seemed like) a lasting monument to what people can create given enough time, resources, and technical ability.

Notre Dame is a physical symbol of the breadth of the human experience. So many human activities that have occurred within its walls; from the coronation of kings, the baptisms of babies and new converts, the safe-keeping of relics, the dolour of state funerals, to the warehousing of food during the Revolution and the worship of reason, as well as the countless prayers to God whispered in hearts and on lips. Human hands made this building that then held within its stones evidence of almost a millennium of humanness: of our art and history, of our music and politics and faith. Perhaps most significant of all, faith.

Many people see Notre Dame as a symbol of faith and belief, and even God himself. As Notre Dame was burning, The Archbishop of Canterbury tweeted: 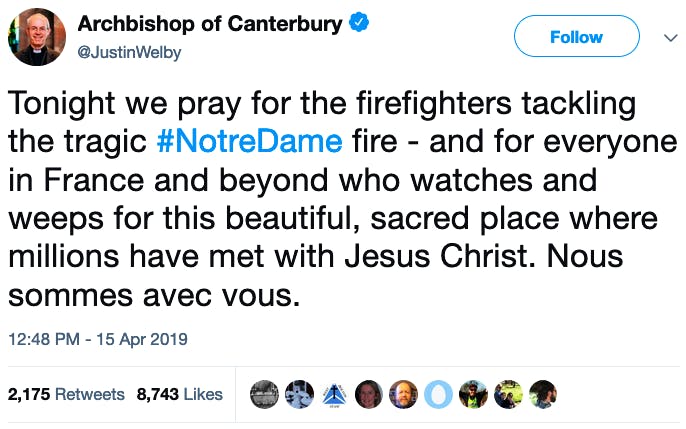 The power of fire to consume and destroy is terrifying.  And that terror has swept across the world, lighting up all of our devices, alerting us to the terrible news of the fire in the Cathedral. But what is it that terrifies us? Is it that Notre Dame burns? Or is it the possibility that in its destruction, we see the destruction of all that Notre Dame signifies? Our history, our culture, our skill, our art, our music and every beautiful thing that we have made – are they gone as well? And faith. What of that? And God?

For some, the true horror of Notre Dame may be that it represents the end of faith, the death of God. If, as Archbishop Welby tweeted, Notre Dame is the place that many met with Jesus, maybe he never made it out alive. Like the other treasures in the Cathedral, is the belief in the Lord a relic of another age, temporal and fragile, and easily destroyed?

Faith can be a relic if it never leaves the walls of a cathedral, or a church, or the confines of the countless figurative altars we deem safe for faith to be expressed. If we confine faith in God to restricted zones and do not let it into our life, then yes. Faith is a relic of a time gone by, and it will eventually disappear.

If God is living, then faith can live and cannot simply be reduced to an historical artifact.

And no. If faith is located in the death and resurrection of Jesus then it is dependent on a living God. If God is living, then faith can live and cannot simply be reduced to an historical artifact. A living faith in Christ seeps into and saturates life and fills it. It resists any reliquary. It is a living thing that can meet death and destruction and still live.

That is the story of Easter.

Good Friday, when Jesus died and all was lost and hope disappeared. But then Sunday came. And, Christians believe, his lungs filled with air again. Everything rests on the belief in the miracle of that resurrection.

Even in its near destruction Notre Dame remains a symbol of the work of Christ in this world. Christ’s body was broken. He was destroyed. ‘He descended to the dead’, as it says in the Apostles Creed. But not for nothing did he do this. As CS Lewis writes, Jesus went down into death and came back up again to “bring the whole ruined world up with Him.”

The images of the ruined, cavernous hull of Notre Dame are mournfully sad. There was so much that was lost. And yet, it is not all. As I write this, I learn that the fire is extinguished and there is news of reconstruction. Of renewal and rebirth. Of resurrection.

Dr Laurel Moffat is a Fellow of the Centre for Public Christianity.