Bono vs Nick Cave on Jesus

Irish band U2 are currently knocking the socks of American audiences with their 360º Tour. Meanwhile, Australia’s gothic prince, Nick Cave, has put out a novel, held a travelling exhibition of his work, and co-written the soundtrack for the forthcoming film based on Cormac McCarthy’s novel, The Road.

These men hitting their 50s have helped to redefine rock n roll creativity; it’s not just for the kids anymore. In fact, it’s hellishly serious.

Both U2’s Bono and Nick Cave put their creative drive down to losing a parent at a young age. That tragedy gave them both a ‘Father-shaped’ hole in the heart that has to be filled with something. Bono says there’s something questionable about a middle-aged man who still needs to hear a stadium full of people chanting his name to know he’s OK. Nick Cave describes himself, using biblical language, as ‘doing the work of his father.

But both Bono and Cave acknowledge that the most significant man in history is not their respective fathers, but Jesus of Nazareth.

At the Nick Cave exhibition, currently at the National Library in Canberra, you can view the bust of Jesus that sits on Cave’s piano as he composes, along with a Gospel of John, open at Chapter 17 with an annotation, reading, “Why is faith essential for eternal life? Why the need to believe?”. Everywhere, the importance of Christ (among other things) for his writing is on display.

Cave seems troubled by Christ, not comforted. In fact, it is Christ’s own sense of conflict and turmoil that appeals to Cave most. He sees Jesus is the example par excellence of the human creative spirit set free. His protests against the restrictions and hypocrisy of the religious leaders of his time is for Cave evidence of Jesus’ higher calling, his capacity to lift his eyes beyond the petty concerns of the mortal realm into something eternal. This is the task of the true artist, in Cave’s view.

Cave wrote in his Foreword to an edition of The Gospel of Mark that Christ was “the victim of humanity's lack of imagination, was hammered to the cross with the nails of creative vapidity”. Christ wants to heal, set free, rage against monotony and fear, and help humanity to escape gravity.

Cave’s Christ is creatively powerful, but not present nor divine. “There’s a man who spoke wonders, though I’ve never met him”, he sings on “Are You The One That I’ve Been Waiting For?” For Cave, Christ’s story is potent and the Man of Sorrows is the highest expression of the tragedy of existence to whom we might look for inspiration.

In contrast, Bono has never hidden the fact that he is not simply an admirer of Jesus, but a worshipper. Like Cave, his view of Jesus is hard, rough and earthy: “There’s nothing hippie about my picture of Christ, “ he told the journalist Michka Assayas in the book Bono on Bono, “The Gospels paint a picture of a very demanding, sometimes divisive love, but love it is.” 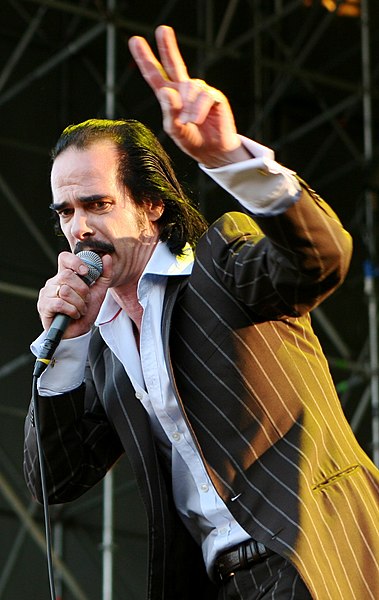 Bono’s image of Christ moves beyond inspiration to something more morally and personally significant. Bono told Assayas that he is “holding out that Jesus took my sins onto the Cross” and, on Jesus’ life, “No, but seriously, if we only could be a bit more like Him, the world would be transformed”.

It’s no secret that U2’s lyrics are Christ-soaked, from the early days of teenage devotion to their current album, where Bono sings the song of Mary, the Magnificat, in praise of God and his Son, on the track ‘Magnificent’. Even in their ‘postmodern period’, with the three albums Achtung Baby!, ˆZooropa and Pop, anyone with ears to hear realised that they were still “looking for baby Jesus under the trash”.

Both Cave and Bono come to the foot of the cross of Christ, but only one of them looks beyond it. For Cave, the cross is dejection and sorrow and the victory of Death; for Bono, it’s the beginning of something eternal.

In the 2006 U2 single, ‘Window in the Skies’, Bono sings a line best understood as a theology of the cross:

It’s a lyric that I can imagine Nick Cave liking: the rule is disproved, the nitpickers and hypocritical powermongers lose; something more transcendent, more real, wins. But the concept of sins forgiven, death’s power broken: that seems distant in Nick Cave’s work. Even ‘The Mercy Seat’, perhaps his most famous song, is about fear in the face of death, not victory over it.

Nick Cave appears to take the words and deeds of Christ seriously—but more as an artist than a pilgrim. For Cave, desire and its expression is the ultimate end of human existence. To use Bono’s words for Cave, perhaps he “kills his inspiration and sings about his grief”. For Bono, the words and deeds of Jesus are a ‘window in the skies’, revealing God. For me, I love both artists, but I’m clinging to the belief that Bono has been swept up in the reality of eternity, and praying that Cave is, too.

Greg Clarke is a Director of the Centre for Public Christianity