Connecting the Faithful - From Bondi to the Bohdi Tree

Monday, I’m in Melbourne reporting on the Parliament of World Religions. Tuesday, it’s Bondi Beach, with cameraman in tow, where I ask random people what Christmas means to them. Despite the obvious connection with matters of faith and belief, the two days could hardly have been more different.

The Parliament of World Religions takes place in a major city somewhere on the globe every five years. This year it was Melbourne’s turn and around 6000 people came to engage in inter-faith dialogue and, among other things, work at drawing the devout towards healing the earth and promoting peace. It’s an appropriately large gathering of the followers of 228 religions (and their various expressions) with 700 speakers and 800 lectures, workshops and activities. 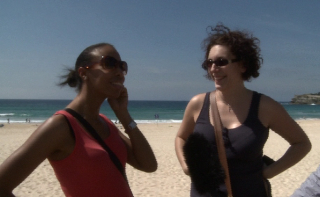 I only dipped my toe in for one day of the six, but even that was enough to be struck by the bewildering array of activities to choose from. Should I sign up for an East Asian Perspective on Ecology, a Global Ethics Forum for a World-Religions Perspective on Justice, War and Peace, or Native American healing through music? Such dilemmas of choice were endless.

Whatever else you make of this gathering, it is a colourful reminder that the religious impulse remains a strong one, and the desire for connection with the spiritual, perhaps with God, is a deeply human characteristic. The place was teeming with Priests, Reverends, Shamans, Yogis, Imams, Celtic Mystics, Monks and Rabbis. There were chanting priests, drumming monks and American students adept in the art of meditation. Among the throng of participants I met pagan priestesses, Texan Buddhists, Jewish ‘radical fairies’ and large white Australian men with names like Bhakda Das.

Cynics might be tempted to dismiss the event as little more than a talk-shop, but the reality is that many at the parliament are closely connected with organisations working in poverty relief, environmental care, justice and human rights. They are well placed to make a difference. And if the movement achieves its aim of developing mutual respect among followers of the world’s religions, that has to be a good thing.

Fast-forward a day, and I’m bathed in the early summer sunshine of Bondi Beach in Sydney’s opulent Eastern suburbs surrounded by an equally diverse, though distinctly less clothed, mass of humanity. Their god appeared to be that of sun, sand, surf and pleasure, and in all honesty it was hard to escape the feeling that heaven perhaps had indeed arrived on earth.

My questions centred on the meaning of Christmas. What place did it have in their lives? Did the traditional story mean anything anymore? Was it a time to be joyful and celebrate? Reponses were as mixed as the punters who we happened upon. Some were locals. Many were from other, colder parts of the world. What was common was an almost universal rejection of the Christmas story as something of personal religious meaning. Plenty said it was important not to lose the traditions of Christmas, but they said it in a way that indicated only the vaguest associations of tradition and childhood memory, rather than personal connection.

It struck me that were these two groups—those I met in Melbourne, and those in Bondi—ever to meet, they would surely regard each other as aliens from another planet, so far apart were their worldviews. One group sought spiritual fulfilment or enlightenment in religion and all the trappings that go with it. The other had cashed in their robes for satisfaction in the here and now. One pursued deity in discipline and spiritual practice; the other, all the creation had on offer today.

It seems a great irony that the message of Christmas might in fact be a bridge between these two groups. For those who believe it, the Christmas narrative celebrating the incarnation of God in the person of Jesus is a stunning drama where God enters into the human predicament in physical form, condescending to take a place alongside created beings. The baby born into poverty and anonymity as the connection between God and us, remains at the heart of the Christmas message, even when so many have forgotten or discarded it. It is a story that ultimately celebrates and penetrates the human desire for God that was so evident at the Parliament of World Religions in Melbourne.

‘Where do you find hope?’ I asked. ‘In the waves, mate’, ‘In the surf’, ‘With my family’. But it didn’t always sound convincing

And the incarnation represents a God who embraces creation in the most profound manner imaginable. It’s an account that affirms the physicality of our lives; that says creation is good, and so is colour and texture, beauty and food; surfing and skating, friendship and family—that is, what was being celebrated with such relish at Bondi. It’s a story that still has the potential to unite the hopes, fears, tears and cheers of both of the apparently distinct and disconnected groups I encountered.

My beachside conversations were fairly light-hearted. But when I dug a bit deeper there were some among the Bondi faithful whose flippant remarks about Santa betrayed an indefinable longing and sadness. Amidst the jokes about beer and BBQs were passing references to fighting families, relationships gone wrong, lost opportunities and the disappointments of life. ‘Where do you find hope?’ I asked. ‘In the waves, mate’, ‘In the surf’, ‘With my family’. But it didn’t always sound convincing.

Most seemed to think of the Jesus story as an important one to hang on to—for the kids. But like all kid’s stories, adults read and remember them with a child-like longing that they be real. The wish for happy endings, miraculous escapes, punishment of wickedness and saving of the innocent; of places where evil is conquered and death is not the end. These are things that never quite leave us. I was left wondering whether the people at either place, with their all too human desires and hopes, ever consider this ‘story for the kids’ and wonder whether it might also be true; whether it has anything more than sentimentality to offer us as we navigate life’s big questions and struggles.