Are tattoos today nothing more than a mishmash of traditions that commodify cultures?

Actress Kristen Bell recently starred in a Funny or Die video that revealed a little known quirk about herself: she has 214 tattoos on her face and body that have to be covered in make-up each day.1

It’s all a joke, of course, for few would choose to memorialise their adolescent orthodontic headgear, or be tattooed with 72 butterflies for each year apartheid was government policy in South Africa (especially when that was only 46 years). 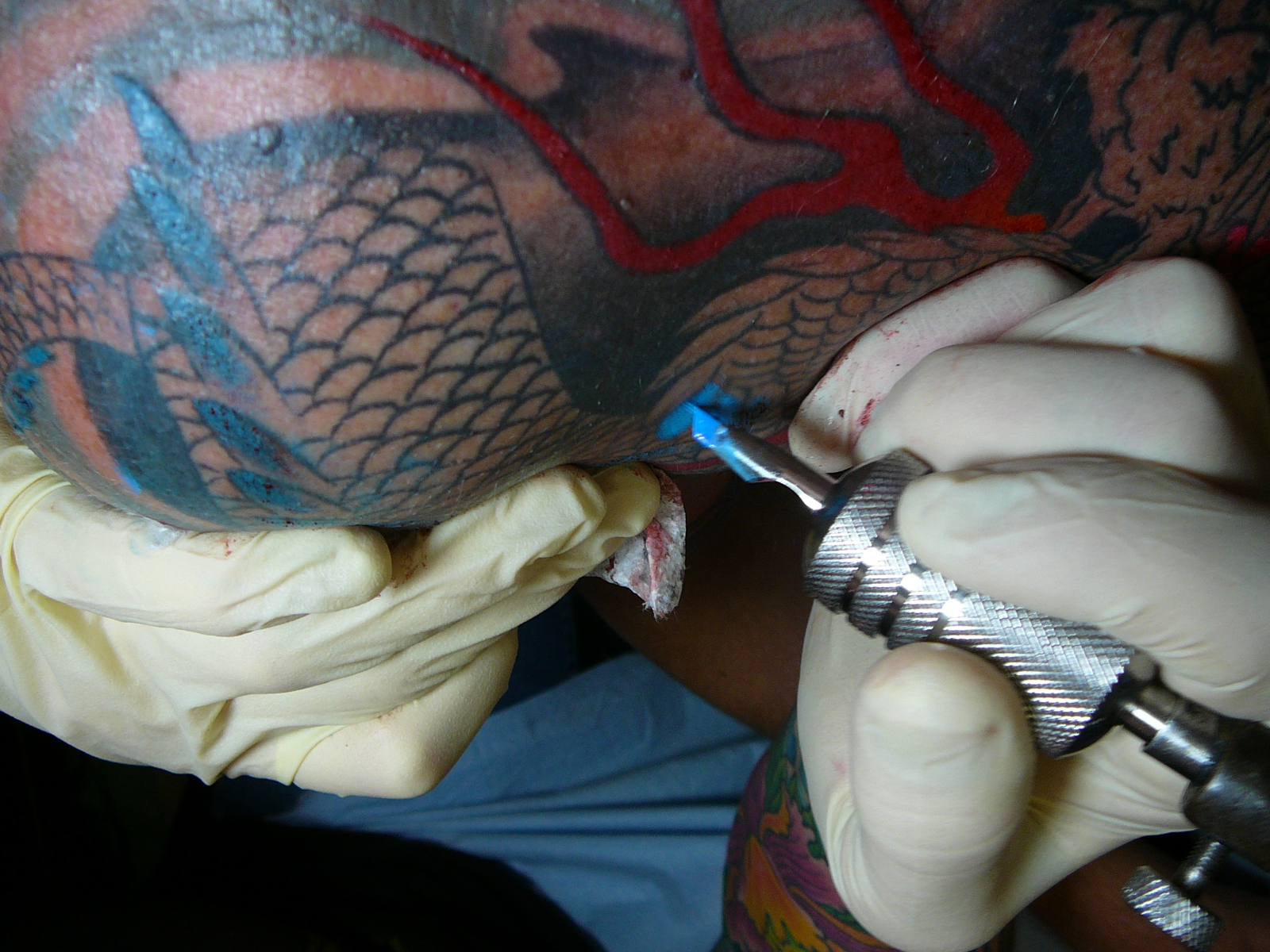 But the video is spot on in its merciless ribbing of the way that tattooing has become the lingua franca of privileged self-expression for liberated Westerners today, and the means by which they can bring their desired selves into being.

That tattoos are a popular means of self-creation comes as no surprise to cultural theorists, who regard the practice as part of our contemporary obsession with ‘body projects’. Getting a tattoo, they argue, is one way a body can be worked on, like a project, in order to develop individual identity.2

Such ‘body projects’ acquire increased importance in a postmodern era wary of looking to the past, tradition, religion, and culture for self-identity, meaning, and purpose. Today we live in “the great age of the spazzy free-for-all,” as Liz Gilbert memorably describes postmodernism in Eat Pray Love, her memoir of self-discovery that is entirely a postmodern search for meaning itself.3

In this “spazzy free-for-all” we’re encouraged to find our own meaning and identity rather than deriving these from earlier sources of authority. The rise of tattoos as personal expression marks this shift.

It’s something of a coup for a practice that in traditional contexts was linked to finding your place in a greater whole. In societies like pre-modern Melanesia and Polynesia, tattooing was used to mark one’s membership of the tribe, along with status and achievements. And in later circumstances, tattooing was linked with deviance, rebellion, and criminality.

Today, however, the tattoo is a trademark of lifestyle and liberation—particularly for Generation Y, among whom tattooing is something of a trend.4

This generation of under-35s has taken to heart the idea that everything is up for grabs in the “supermarket of style” of postmodernism5. When it comes to tattoos, this means that we’re free to cherry-pick from various traditions, cultures, styles, and sensibilities to express our personal philosophies and decide who we want to be.

It goes without saying that body art should be exotic rather than familiar, because strangeness and difference make tattoos ‘authentic’ in the way that a tattoo of a dolphin just isn’t.

Just ask Australian cricket captain and Gen Y-er Michael Clarke, who has both Hindi and Arabic script tattooed on his body—though to be fair, Clarke is also something of an Occidentalist with his test number inked on his back in Roman numerals and the Latin motto ‘carpe diem’ trailing down his arm.

Multiple tattoos from differing traditions often give rise to a hodgepodge of values and attitudes. For many Gen Y-ers unwilling to commit themselves to a single overarching philosophy, that jumble of ideas may be the point.

This mash-up of meaning, however, is also lampooned in Bell’s video, with her inaccurate interpretation of the Chinese text tattooed on her body (that character means something rather less exalted than ‘princess’), her regret over the “outdated” tribal band around her wrist, and her ‘I ♥ Microsoft 95’ tattoo.

Her tattoos raise the question of consumerism—which has stepped into the void left by earlier sources of authority and offered the individual the means by which they can craft their identity. In fact, Bell’s video implicitly criticises the way that body art, rather than expressing the inner self, instead offers up that self as a catalogue of commodified experiences—of the ethnic other, and of the individual’s loyalty to certain brands.

It’s ironic, given that ‘authenticity’ is often what’s sought after when getting a tattoo. But maybe commodification is hard to avoid when you’re shopping for self-identity in the ‘supermarket of style’.

However, not all tattoos need be a spazzy mishmash of traditions that commodify exotic cultures for their owner’s gratification. 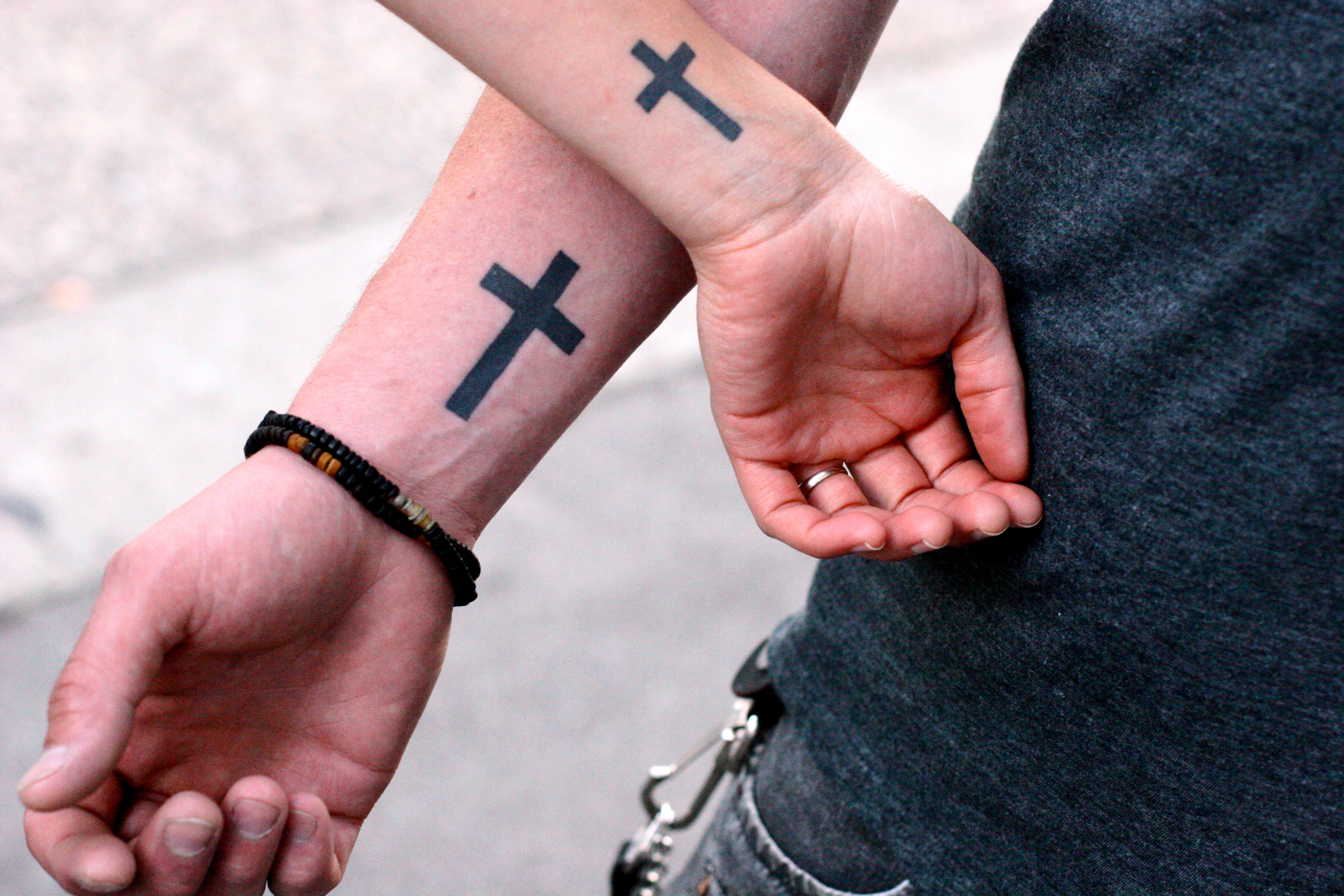 While a bit of a cliché, the religious tattoo can be an emphatic declaration of spiritual allegiances in a postmodern world that routinely swaps out conviction for irony and belief for scepticism. And given the difficulty of removing a tattoo, the presumed permanence of the tattoo can make getting one a radical move in a world of flux and fads.

Christian commentators are sometimes wary of tattoos because tattoos can’t completely evade the consumerist trap. In Earthen Vessels, for example, Matthew Lee Anderson writes that Christians are “perpetually in danger of making Jesus our brand and the cross our logo”.6

But the religious tattoo’s frequent links with personal stories of coming to belief can strike a compromise between the world of tradition and authority from whence we’ve come—which often trampled upon individual freedom—and the world of self-creation where we are now—which stridently insists on the right to self-expression.

In fact, rather than binding the individual to the world of authority and tradition, the religious tattoo and its accompanying narrative of spiritual awakening is a good fit for a world obsessed with working on the body. For conversion stories assume that a particular self—the faithful believer—must be brought into being. The religious tattoo can be a reminder that the Christian way of life, if lived sincerely, must be put on and worked at rather than naively, self-evidently assumed.

In the end, I suspect that what’s important is not so much what we—believers and non-believers alike—mark on our bodies so much as what we do with them in the service of our deepest commitments. That kind of body project is something that faces us all.