Mad Bastards: A Story with Soul

If you’re prudish about a bit of rough language (and you’ll know I’m talking to you if the title makes you squirm), then you might not want to see this new Australian movie by debut film Director, Brendan Fletcher. But that would be a great shame, because it’s beautiful.

How can a film depicting Aboriginal incarceration, alcohol abuse and domestic violence be beautiful? Simply, because it is a story with soul. Intimate, raw, without being arthouse.

Mad Bastards follows the journey of TJ (Dean Daley-Jones), a tough, angry and troubled ex-con in a world of inner pain. It’s clear that this young Aboriginal man is on his way back to jail if something doesn’t change soon. At an all time low, he reluctantly decides to take the 2000 kilometre journey up to the Kimberley, in search of connection with his 13-year son, Bullet (Lucas Yeeda), whom he has never met. 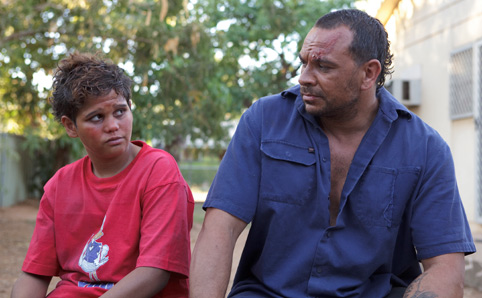 At the same time, in the tiny frontier town of Five Rivers, Bullet is on the verge of trouble, bereft of reasons not to give in to his internal anger as he watches his mother, Nella (Ngaire Pigram), losing her battle with alcohol. When he throws a firebomb at a local building, he barely escapes being locked up. Instead he’s sent into the wilderness for two weeks on a boys’ camp for adolescent offenders run by the elders, to be taught manhood the traditional way.

Texas (Greg Tait) is my favourite character in the film. The local cop and Bullet’s grandfather, Tex is the no-nonsense, hefty Aboriginal man with a strong sense of ownership over ‘his’ town. He smells trouble when TJ arrives in town and doesn’t hold back in telling him so. But ultimately, it is his inner-strength and the capacity to make himself vulnerable that make him the redeemer in the story.

Along the way, we meet characters like old Uncle Black, whose white beard, dirty cowboy hat, soft grin and oft-repeated words, ‘Hello my boy … you got trouble anywhere?’, make him completely endearing. And the Pigram Brothers appear as travelling musicians, bringing a lightness with the distinctive sound of their ukelele and mandolin melodies woven through the journey.

Mad Bastards is a deeply intimate human story: about having the courage to fight our ‘inner demons’ in order to find genuine connection, a place of belonging, and ultimately redemption. But if that’s not enough, here are three reasons I think people should see this film.

First, it is authentic. Leaving the cinema, I had no doubt the Director understood the concept of grace and humility. And sure enough, this film is the product of more than a decade of genuine relationships (and many fishing trips) with people in this remote part of North West Australia. It was the compelling characters Fletcher continued to meet that inspired him to make the film.

Neither are the actors phonies. Unlike Australia, where the cream of our crop were flown in from Hollywood for a nostalgic shoot, the script of Mad Bastards was co-written by the actors. This is their story. When the credits roll they tell us of their own experiences with incarceration, alcohol abuse, anger and domestic violence. Only one of the actors is trained, and yet the performances are absolutely stirring.

Second, it’s a visceral encounter. Australia is an ancient, primal land. For those of us who have lived our entire lives in an east coast city, this is a chance to see the outer limits of Aboriginal Australia in a refreshingly unselfconscious and understated way. The dialogue is minimal and honest, respectful of our capacity to experience the story, as we do much of life, in a non-verbal way. The original music written for the film, which is interwoven through it, is hopeful and uplifting. And the cinematography of the Kimberley landscape is simply beautiful. All of this works together to make the journey to the ‘last frontier’ an emotionally powerful and transformative one.

Third, it’s good for your soul. There are no big bucks in making a film this way. It takes guts, hard work, and a belief that truth telling is ultimately worth it.