Greg Clarke finds Bob Carr's My Reading Life to be a mix of memoir, adult education and manifesto

The former Premier of New South Wales, Bob Carr, has written a book about reading. My Reading Life is part-memoir, part-adult education course, and part-manifesto from one of Australia’s most thoughtful political figures. He subtitles it ‘Adventures in the World of Books’.

The book is a record of one man’s voracious appetite for stories, for history, and for not missing out on the great works of literature while endeavouring to run a modern state! He talks about reading Boswell’s journals on a plane from Sydney to Broken Hill, or discussing the Epic of Gilgamesh with the Mayor of Fairfield—great images of an Australian reading life. 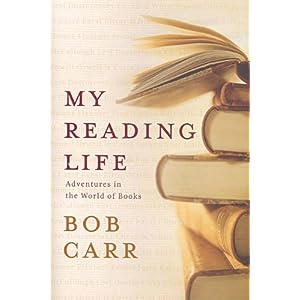 In that particular conversation at Fairfield Showground, the mayor tells the premier that the reason he loves the Epic of Gilgamesh (which is an ancient myth of origins) is because the main character found that ‘there was no such thing as eternal life. Just your deeds.’.

This is very much a summary statement of Carr’s own view, and it is the theme which—to my surprise—shapes his book.

Carr opens the book with his discovery of the writings of Primo Levi, a survivor of Auschwitz who chronicled his experiences of the concentration camps in his book, If This Is A Man. This puts the questions of God’s existence, God’s goodness, and death, right at the top of the page for Carr’s readers. Carr’s sense of priority is admirable.

He writes casually and engagingly about all of his reading, from his mixed review of Patrick White’s novels, to his high-school love-hate relationship with Shakespeare, through his reading of American and Chinese history, and everything in between it seems!

On the Bible however, Bob Carr is less than satisfactory. He listened to it on tape, rather than reading it. This is probably appropriate for many parts of the Bible (like the New Testament letters, which were read aloud in churches, or perhaps the Psalms), but it doesn’t allow enough time for reflection on the weightier ideas in the New Testament. To his great credit, Carr called in experts in the Bible to talk him through its content. However, he became convinced through talking and further reading that God requires unquestioning obedience (and therefore won’t be held accountable for such terrible events as Auschwitz).

He also seems to side with the more radical readings of the Gospels that suggest Jesus’ divinity was established late in the Gospel of John rather than the more accepted scholarly view that it was part of the very earliest of Christian beliefs (I recommend the books of Professor Larry Hurtado on this point). And Carr has been convinced that it was the Apostle Paul who founded Christianity as a religion, distorting Jesus’ teachings. Again, this is a theory that is not well attested. Local authors, such as Edwin Judge (who is featured on the CPX website), and Paul Barnett may be able to add a different perspective to this very important point of enquiry. I get the impression that Bob Carr’s mind is still open to further enquiry here, and he could certainly enjoy a lot more reading in this area.

Like all good reminiscences, Bob Carr is writing most of the time about death – about its approach, about its unthinkability, about ways of being brave in the face of it, about whether or not it is the end. Carr seems to have concluded, profoundly, that it is. He likes William Faulkner’s description of life’s purpose as ‘getting ready to stay dead for a long time’. Carr is fascinated by the human predicament. We are so grand, so magnificent, and yet death reduces us to dust.  Human beings can scale the heights of creaturely achievement, but death still makes a mockery of it all.

He admires a human being who remains decent in the face of death. The Auschwitz victims whom Primo Levi describes in such noble terms represent the best of humanity, in Carr’s final reckoning.

It interests me greatly that the founder of the Christian faith, Jesus, was also ‘decent’ in the face of death. The Gospels make a lot of his behaviour during his trial, his humiliation and his execution by crucifixion. His silence before Pontius Pilate, his pacifism while he was beaten and whipped, his gracious words to those who were crucifying him, are all testimony to someone who faced death with decency.

But there is another, important element to Jesus’ attitude to death which is not on view as far as I can see in Bob Carr’s memoir. It is that Jesus still saw death as wrong and shameful and unnatural. This is in contrast with Carr’s hero, Marcus Aurelius, whom Carr quotes as saying, ‘Nothing about death need give cause to shame’ and ‘It is among the things that Nature wills’.

The Christian view of the world insists on the notion that human death is offensive and appalling. Although it won’t be avoided, the Christian promise is that it will not be the end, that a life beyond this life remains to be had, and that the resurrection of Jesus from the dead after his crucifixion is the beginning of the fulfilment of that promise from God.

The Christian view of life is more comic than tragic, ending in happiness not despair. It offers more than mere resolve that, at death, the end has come, but real hope that it has not. This is either an absurd hope, as it seems Carr currently believes, or it is a hope grounded in history, in the evidence that Jesus rose from the grave and his eternal life is available to those who follow him. Take your pick – but, like Bob Carr, it’s worth doing a lot of reading and thinking before you decide.