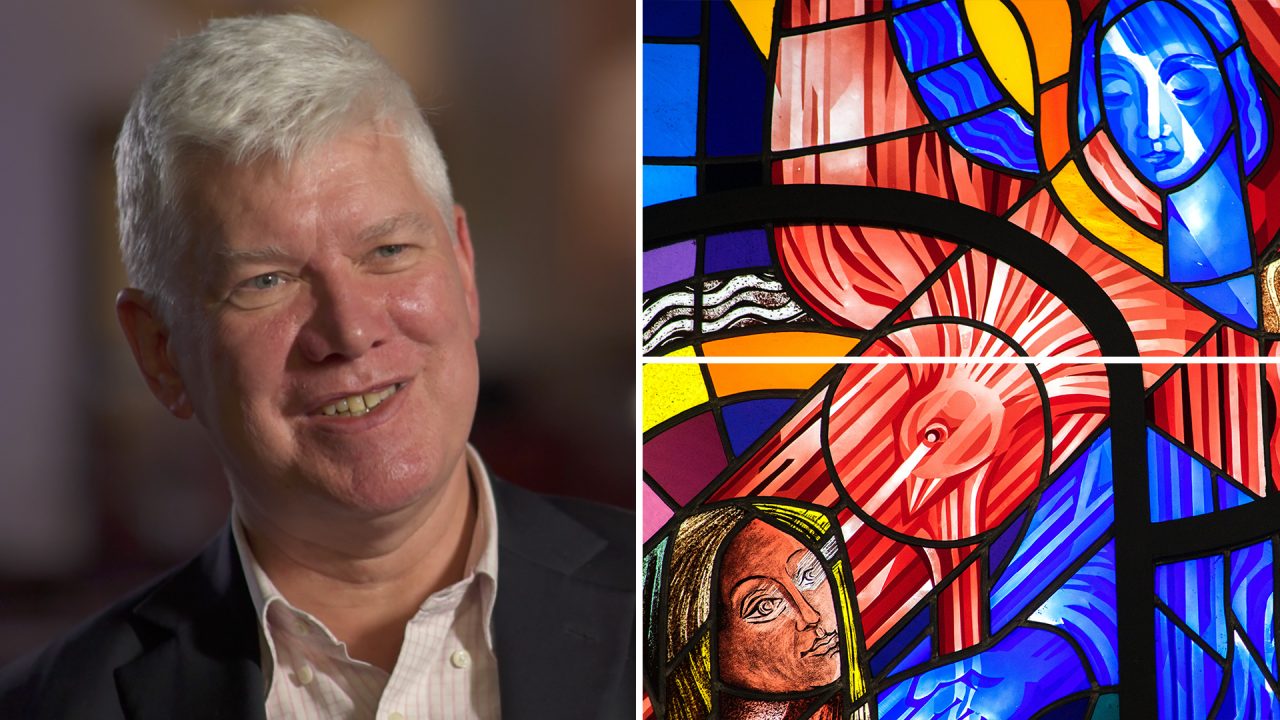 On art vs faith

John Haldane was startled to find that Christianity has sometimes been considered an enemy of art.

John Haldane was startled to find that Christianity has sometimes been considered an enemy of art.

A few years ago I was invited to review a book by a Dutch scholar, an art historian – I think his name was Rookmaaker – and the interesting thing about this book was that, as it turned out, he was a Calvinist, and in the course of this book he was struggling to make the argument that Christianity was compatible with art. With both the making of and the appreciation of art. And I found this was an extraordinary book because my own background … my mother was a choreographer, my mother’s family on that side were all involved in theatre, film, broadcasting, and so on, and so I had … and I had … I spent five years at art school. So I grew up in a family that was involved in the arts, but also Catholic. And so it just came as news to me that somebody could think there might be a tension between religion and art.

So I had to struggle to understand what was going on there and of course, you know, in a sense, that was just my ignorance. I mean clearly what’s going on is an expression of this Hebraic idea – transposed of course into Islam – about the not making of graven images, and the sense that … it’s, I mean, there’s a complicated dynamic to that. On the one hand you’ve got the idea that God is beyond representation, God is beyond everything, and so any attempt to represent God is a kind of vanity and inappropriate and so on. But you’ve also got the idea, which really goes back to Plato, that somehow the arts appeal to the sensuous aspect of humanity and so they sort of draw us down into the pit of desire and pleasure.

Well, those traditions exist, but they, I would say, are alien to the broad Christian tradition. I mean we know – and indeed we now know better, because of archaeological work – that Christians were making images within the lifetimes of people who were contemporaries of Jesus. So religious … Christian religious art originates within the first century. I myself have done some work on a sarcophagus in the … in Zaragoza in Spain from the first half of the 4th century which has a depiction of the Assumption of the Virgin Mary on it. Which is very interesting because it establishes a reverence and a kind of presence of that idea as early as the 4th century and as far away as Spain.

Clearly within the Christian church there have been debates about the place of art and the question of depiction and how far one may go, and the incorporation of the arts within liturgy, for example, within worship. There were debates in the early church, or at least in the first thousand years of the church, both in the West and in the East. It tended to continue more in the East and that was really the principal focus, but the … it was resolved there first, in favour of art and the incorporation of art. Partly because, of course, the Eastern Church is existing in a world in which the arts are highly developed – music, sculpture, and so on. But it’s also resolved in the West. One of the early medieval poets says … I think it’s Villon, that, you know, the … puts into the mouth of his illiterate mother, they showed me a painted paradise with harps, referring to some image in the church. And of course the point there – and this is taken up by Gregory the Great – is that pictures do for the illiterate what texts can do for those who can read, that they feed the imagination, they’re a source of information, a source of inspiration, and so on.

So the theological debate having been resolved in favour of the permissibility of bringing the arts into a conversation with, and in service of, religion – that having been resolved, the question is, how do you do it? And I think that some Christians tend to have a rather simplistic and overly literal view of how that’s done, as if the role of the arts is just to provide either the musical accompaniment for the text or the images to be associated with it. I think the matter is much more subtle. I, for example, have done a number … a series of interviews with pretty major artists in which we’ve approached questions of religion and meaning and so on rather indirectly in relation to their work. So these are artists who wouldn’t see themselves as religious necessarily, but are intrigued by religion, and in their own work have found themselves moving in directions that make religion … let’s say, bring it over the horizon for them. And I think that one can enter into rather interesting questions about that which can often intrigue the artistic imagination. They find these things genuinely engaging.

So I think it’s a more subtle and complex matter. You know, to go from “art and religion are ok in harness” – or in mutual service, or whatever else it may be – isn’t then just to sort of say oh, so we all produce picture books, you know. And of course that did tend to happen in the Victorian period very much. But I think we need a subtler and more complex approach that also recognises and respects the autonomy of art, I mean what’s been happening in art that’s gone on independently of obviously religious inspiration and so on, and then try to sort of engage with that. Because if I’m right in thinking that the creative impulse in human beings derives from God’s giving them a share in his ongoing creative activity, then that creative impulse will itself – even unbeknownst to its author as it were, its human author – orient itself periodically in the direction of the Creator. And so sometimes one can help people … I mean, this can maybe sound condescending, one can bring to people’s attention the possibility that their work has a religious orientation that they themselves might not hitherto have recognised. And that’s something that I’ve done in published interviews with artists and in discussing privately with them, and in some cases actually collaborating with them on particular projects.