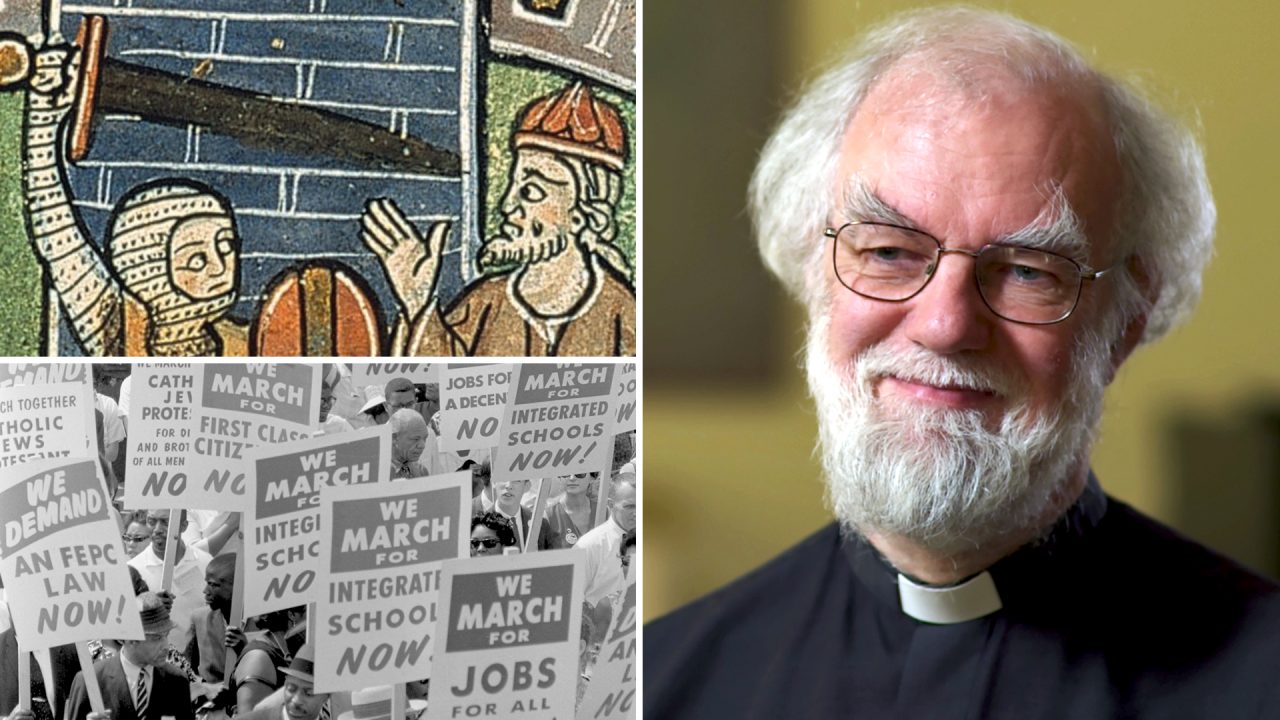 Christianity’s attitude to violence has been quite a varied thing. It begins very much as a pacifist movement, in effect, and early Christians strongly discouraged each other from joining the army. We know there were Christians in the army because there were Christian martyrs from the army. But most of the writers of the period are pretty hostile to military service.

When the Empire becomes Christian, then of course the … yes, the territory changes a bit and you begin to have arguments about when you can legitimately use violence. In the work of St Augustine, for example, in the fifth century, you begin to get this theory of a just war – that is to say, when is it not just sinful to engage in force and coercion.

Now, that’s a long way from holy wars. I think what we sometimes don’t notice is the slippage between that and, say, the medieval crusading ideal. Augustine is saying, “Look, things are falling apart. The world is pretty difficult. There are circumstances where you have got do what isn’t ideal. If in order to fight off marauding barbarian tribes from northern Europe, you need to take to battle – well, all right, I suppose. I mean, it’s not a good thing but the alternative is probably worse. And if you are going to do it and still remain some kind of a Christian, then for goodness’ sake keep in mind the following moral principles. Nothing will make some behaviour good.”

So it’s a very grudging concession. It’s certainly very different from the crusader marching off to recover Jerusalem shouting, “God wills it.” And the Knights Templar in the Holy Land, and the whole notion which St Bernard in the twelfth century talks about, of the sanctity of the new militia, the new army of Christ. So there’s a slippage. There is quite a bit of tension here. Again, even in the Middle Ages you will find very, very few theologians justifying anything like a holy war. You will find, once again in St Thomas and other writers, the same grudging acknowledgement that you find in Augustine that possibly there are circumstances where the least awful thing to do is to go to war, to defend a country, to avoid major injustice and oppression and so forth.

That tension has gone right on. You have in the sixteenth century the peace churches, the Mennonite Churches, absolutely committed to non-violence. You have on the other hand Luther, and indeed the Church of England, saying in certain circumstances you can do it – and it’s a division which still runs within Christianity.

That of course is a reason I think for being very suspicious of those who say, well, there’s something intrinsically violent about religion in general or Christianity in particular. There are plenty of circumstances where for Christians – as indeed for Muslims – religion is a really, really good alibi, a really good banner to march under. If there’s a conflict that’s basically about something else, it’s terrifically helpful to make it a religious conflict because it reinforces your own righteousness. But actually, it’s not true, it’s simply not true that the majority of human conflict, then or now, is religiously based. It can be religiously cloaked, it can be religiously justified, but it’s a big claim to say that it’s religiously motivated. And I don’t think it’s a claim that can be sustained.