Don Watson's examination of the best and the worst of contemporary American life.

The release of Don Watson’s American Journeys is a sure sign of the times. Perhaps there has long been an appetite in Australia for understanding things American, but given the level of US political coverage in the Australian media, or even the heightened level of academic attention currently given to the US now would seem to be a moment of intensified interest. 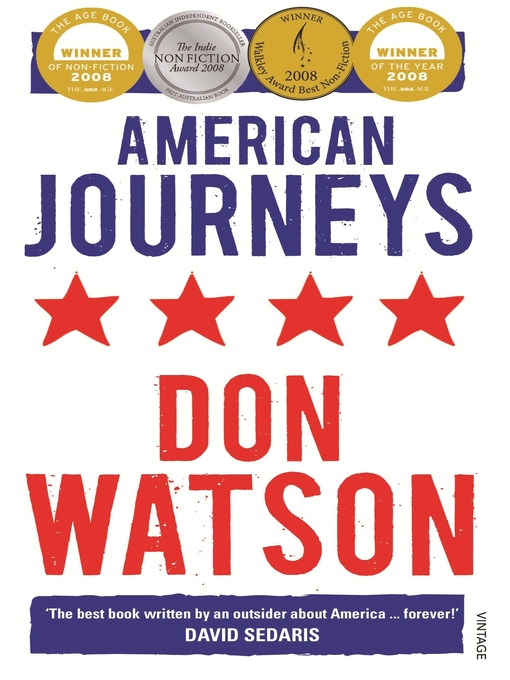 It’s also a sign of the times that Don Watson’s book features religion, specifically mainstream evangelical Protestantism, so heavily in its pages. Written as far more than a travelogue, Watson’s book provides serious reflection on important themes in American life, mixing readings in literature, history, and sociological analysis with textured, sensitive observations of everyday people and life on American trains, roads, diners, suburbs and cities. And of the themes of the book, up there with the shocking record of government inaction in the wake of Hurricane Katrina, up there with the problems of race relations, and with the colorful beauty and perversity of consumer-capitalism, is American religion.

Readers of Watson are given profiles of big-name evangelists, taken on a tour of the history of Pentecostalism, and led into the not-so-private devotional life—indeed the devotional industry—of millions of American Christians. They will feel the heat—past and present—of debates between creationists and evolutionists; they will taste the acidity of culture warfare on the airwaves, and they will get a sense of the extraordinary innovation, individualism, and sheer ubiquity of Jesus-worship in America.

Leaving aside issues of exclusion or inclusion for the moment, Don Watson’s book is eminently well-written—as you’d expect from the critic who wrote Weasel Words. Its tone is for the most part non-judgmental, seeking to observe what is rather than what ought to be. This is true to Watson’s implicit “thesis” (although “thesis” is too crude a word for such a poetic book): that in the United States is found the very best and very worst of what Western civilization has to offer. In recording the best and the worst, Watson exercises great patience for what appears to the reader as the absurd, the banal, and the blind.

Yet there comes a point at which Watson can take it no longer. Sure he is angry at the neglect of New Orleans in the wake of the devastating hurricane. But where he really loses his cool—finally—is on the topic of religion. And here at this point is a moment not only of great passion but of great insight.

Watson’s whole book shows the “cultural enmeshment” (not his phrase, so pardon the weasel word, Don) of religion with politics, with economic behavior, and with socio-psychological crisis. It shows the complicity of Christianity with a consumer-mentality, with imperial nationalistic politics, and angry culture wars. Whether or not this is an entirely full and true picture of American evangelicalism, it is a picture, perhaps like every caricature, with a basis in reality. And it begs the question, at what point does “cultural enmeshment” undermine the very religion that is being enmeshed?

Watson’s explosive plea doesn’t call for the abolition of religion, which, as he implies through the book, would not be a wise or a realistic way to go about things. Rather, it’s a call for reformation from within—a call, not from an insider, but from an outsider, a lapsed, unbelieving Presbyterian, as Watson describes himself. But Watson knows enough of his Bible (quite a lot, in fact) to know that a religion which claims to worship Jesus ought to behave congruently with that claim. What Watson yearns for, then, is the presence of a vital and effective church which takes the story of Jesus seriously. It’s a yearning that many a reader will share.

To Watson’s call for historical reformation “by a new breed of radical Puritans” I would add a note of observation. There are signs of change if one is willing to look. Reading the works of Tony Campolo, Ron Sider, or even the vociferous Jim Wallis, will give a glimpse of a new kind of intelligent and justice-oriented politics, sensitive to the critiques Watson makes, and emerging from within mainstream evangelicalism1.  Even large evangelical churches, often seen as complicit with the “mall culture” of middle America, are beginning to baffle journalistic presumptions about evangelicals and conservative politics2.  Rick Warren, pastor of the enormous Saddleback church in California, has sought to make both climate change and global poverty evangelical issues, while Bill Hybels, pastor of Willow Creek Community Church in Illinois and one of the country’s most influential preachers, has remained critical of America’s “quickness to invade” Iraq. Echoing Watson’s own concerns, mainstream evangelical magazine Christianity Today launched a new forum in 2006 (“The Christian Vision Project”) which brought together Christian thinkers and artists to reflect on the question, “How can followers of Christ be a counterculture for the common good?” Stanley Hauerwas (described as “America’s best theologian” by TIME magazine, although he decries the validity of such a category) has an influence within and beyond evangelical bounds; and the radically-pacifist Hauerwas would, I think, make Watson’s points in language even stronger than Watson’s.

But beyond that observation, to Don Watson’s plea for radical reformation from within, I would add a hearty yes and “Amen.”

Mike Thompson is currently completing his PhD in History at the University of Sydney, where he is researching and teaching US history.