Should you be true to yourself?

In the age of 'be true to yourself', is there any value in being known by God?

There is one piece of advice that you hear everywhere today in all sorts of contexts. It’s a big mantra for the self-help industry and it turns up in everything from school captain speeches, celebrity interviews, and children’s books, to high-brow literature and philosophical discussions of ethical dilemmas. To disagree with it is almost unthinkable. And most people think it’s about the best advice you can give. It is this: “Be true to yourself.”

Michael Clarke said it when discussing his tattoos. Pop star Rihanna said it when asked about what she was wearing, or not wearing, in her music videos. Ben Lee said that it was what he hoped for his children. Dr Seuss’ eponymous Cat in the Hat said it well: “Be who you are and say what you feel.”

Popular culture frequently reflects our preoccupation with self-knowledge and self-expression. Celebrities, who reflect as much as set trends in society, are just as concerned about their identity and image as we are. If they are iconic, it is us whom they represent. As Bruce Elder states, “pop stars become hugely important because in the global village they often define who we are.” 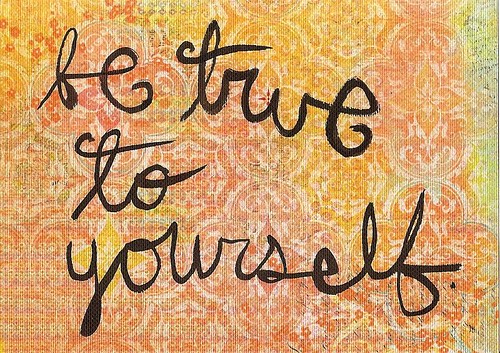 Many films explore themes related to questions of personal identity and self-discovery. Matt Damon’s movies in particular tap into our fascination with inscrutable characters. As one reviewer put it, “it’s hard to think of another contemporary star who has played so many unknowable cyphers.” Damon excels in playing characters that are “kind of undefined.” This is true of his roles to a greater or lesser extent in Good Will Hunting, The Talented Mr Ripley and The Informant. It is perhaps most clearly seen in The Bourne Identity movies, where the amnesiac super spy Jason Bourne is an existential puzzle, not least to himself.

The best advice popular television hosts can muster is to be true to yourself. Oprah Winfrey has her finger on the pulse: “I was once afraid of people saying, ‘Who does she think she is?’ Now I have the courage to stand and say, ‘This is who I am.’” Such comments were a sure-fire route to a standing ovation on her show.

Ellen DeGeneres sums up the spirit of our age in her 2009 Commencement Speech at Tulane University in New Orleans: “For me, the most important thing in your life is to live your life with integrity. My advice to you is to be true to yourself and everything will be fine.”

As advice goes, it is hard to fault. The alternative is to risk being manipulated by someone else and then act in a way that is out of character. No one likes a fake or a phony. Think of the merciless criticism of Lana Del Ray for supposedly pretending to be something she’s not. “Be true to yourself” is for some another way of saying live life to the full, think for yourself and be willing to stand out from the crowd.

Put another way, to be true to yourself taps into our commitment to authenticity as a moral ideal. Social researcher John Zogby explains the widely-felt attraction of authenticity. He claims to have detected “a deep-felt need to reconnect with the truth of our lives and to disconnect from the illusions that everyone from advertisers to politicians tries to make us believe are real.”

Many people, it seems, have doubts about consumerism and feel that they are surrounded by a mediated reality, by the shoddy, shallow and superficial; in short, the inauthentic. The call to authenticity is a broad movement calling for congruity between our inner and outer selves.

Philosopher Greg Ten Elshof traces the elevation of authenticity to the rise in prominence of existentialism. Existentialism focused attention on the individual person and his or her emotions, actions, responsibilities, and thoughts. “The ‘Good Person’ was increasingly understood to be the ‘Authentic Person.’” And “being true to oneself became a – or, in some cases, the – chief good.” Ten Elshof, a college professor, has even noticed this focus on authenticity in the classroom: “Students don’t want simply to be handed the information requisite for competence in their field. They want to know me – the ‘real’ me.”

In a pluralistic society, where there are few agreed norms of behavior to be true to, we often resort to our selves as the measure of all things

To speak against being true to yourself is a risky business. Psychologists generally regard authenticity as a basic requirement for mental health. Karen Wright, for example, argues that “authenticity is correlated with many aspects of psychological well-being, including vitality, self-esteem, and coping skills.” In short, being who you are is highly recommended.

Yet some qualification of our enthusiasm for authenticity might actually be needed. In a pluralistic society, where there are few agreed norms of behavior to be true to, we often resort to our selves as the measure of all things. The problem is that virtues like patience, kindness and faithfulness can take a back seat to having integrity and being genuine.

What if my self is selfish? After all, the dishonest friend, the greedy workaholic, the malicious gossip and the abusive spouse, when they behave in character, and hurt others, can all claim to be true to themselves. The problem with being true to yourself is that too often the self abuses the privilege.

The biggest problem with the slogan is that to be true to yourself, you have to know who you are. And these days more and more people are unsure of their true identity. Many factors weigh against having a stable and satisfying sense of self.

In the past an individual’s identity was more established and predictable than it is today. Many of the big questions in life were basically settled before you were born: where you’d live, what you’d do, the type of person you’d marry, your basic beliefs, and so on. It’s not that there was no choice. Rather, the shape of your life was molded by constraints to an extent that limited your choices. Today we are literally spoilt for choice, which can be both a source of joy and anxiety.

Polish sociologist Zygmunt Bauman explains: “Traditional communities are rivers, while modern societies are oceans. A river has a direction and carries you along with the current, just as traditional societies direct their members in a particular way. In modern societies there is no current; we can choose to go any direction, no direction, or to shift direction with every change of winds.” To extend the metaphor, there is also more chance of getting lost or drowning in an ocean!

Modern life, with all its possibilities, can leave you with a general feeling of dissatisfaction, and something short of a healthy sense of self

Sociologists also talk about the phenomenon of “churning,” where globalization, consumer culture and hyper-mobility leave us giddy with choice. Brigid Delaney, in This Restless Life, reckons that this smorgasbord of options leaves us with a gnawing uncertainty and restlessness. She writes from experience, with a career of some 144 jobs in six countries by the age of thirty-five! Small wonder Delaney complains of a sense of not belonging anywhere.

While Delaney is an extreme example, her story does underline a trend towards living widely rather than deeply. In her view, “in the fatigue of living widely with all the spending and experiences this involves, no great collective wisdom has emerged.” Modern life, with all its possibilities, can leave you with a general feeling of dissatisfaction, and something short of a healthy sense of self.

Apparently such self-doubt is rife among the members of Gen Y, the generation known for its reluctance to move through the rites of passage from adolescence to adulthood. Many of them take the attitude that there is plenty of time to think about marriage and mortgages. What other generations view as Gen Y’s irresponsible and at times self-indulgent behavior may well be a sensible response to an increasingly complex world.

Theologian Peter Leithart gives a similar diagnosis. According to him, our world destabilizes the self by uprooting people from the traditional fixity of place, custom and community. He points out that in the Western world today our sense of belonging and identity is not supported by continual contact with the same set of friends, the same family members, the same co-workers. Leithart paints a picture of a society marked by fragmentation and fluidity, where relationships are temporary and loose. In this context, self-fashioning is the order of the day and self-knowledge is superficial at best.

Alain de Botton’s latest book, Religion for Atheists, compliments religion for modeling the values of habituation, reflection, embodiment and community. Another important contribution of faith communities is in helping people to find a secure and satisfying personal identity. In the case of Christian faith, rather than finding or defining yourself, there is a deep sense of being known by God, which is in turn thought to be the key to knowing who we are. Looking beyond ourselves in order to be found, might just be the key ingredient if we are to avoid an ocean of confusion and anxiety, and an industry of well-meaning but ultimately inadequate self-help.

Dr Brian Rosner is a Fellow of the Centre for Public Christianity and lectures at Moore College. From July, he will be Principal of Ridley Melbourne.

This is an extended version of an article that ran in The Age.