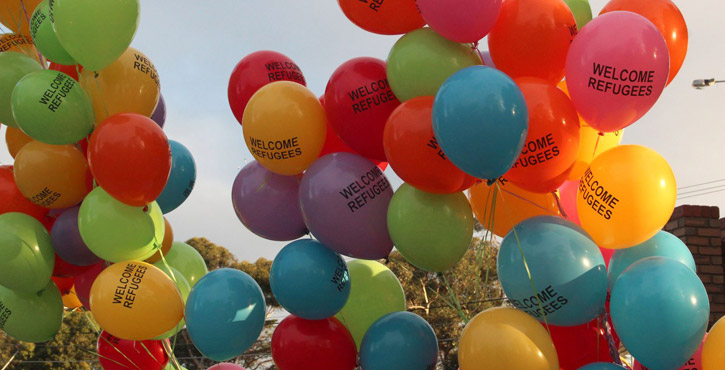 Sparking the moral imagination of the masses

On Sunday, liberated from my former professional obligation as a journalist to be neutral on political issues, I joined the Melbourne Palm Sunday walk for justice for refugees.

It was a powerful event, but it left me with an uncomfortable question for refugee advocates, to ponder alongside a much more disturbing question I have long wanted to ask Immigration Minister Scott Morrison.

I turn first to Mr Morrison. In his maiden speech to Parliament, on February 14, 2008, he made much of his Christian faith, from which he said he derived the “values of loving-kindness, justice and righteousness, to act with compassion and kindness … to fight for a fair go for everyone to fulfil their human potential and to remove whatever unjust obstacles stand in their way.” He continued: “We expect Christians to be those who stand up for the truth, to stand up for justice, to stand on the side of the poor and the hungry, the homeless and the naked.”

Splendid! Yet Mr Morrison has presided over the cruellest refugee policy either the Liberals or Labor have yet devised – deliberatively punitive, filled with unnecessary, petty, even vindictive, cruelties. In explicit contradiction of the book that Mr Morrison says guides him, the policy treats people as a means to an end, that of deterring other asylum seekers.

He has made it policy to distort the legal status of asylum seekers, and mislead the public about the conditions from which they flee. He has taken to new lengths the abhorrent policy – devised by former Coalition minister Phillip Ruddock and continued by Labor – to dehumanise refugees, painting them as faceless criminals and exploiters, and limiting access by journalists and others to them or their stories. It does this because seeing the human faces of asylum seekers might stir Australians' natural compassion to reject the policy.

How Mr Morrison reconciles his approach with the values of his maiden speech and, more importantly, his Christian conscience is a matter between him and God, but it baffles this observer.

Not that anyone should imagine a criticism of Coalition policies is tantamount to support for Labor. If their refugee policies in government were a sliver less brutal, this was because Labor was more timid, not more moral. For our treatment of asylum seekers is first and foremost a moral matter.

And, given that refugee advocates who appear in the news media certainly believe this, my question to them is: surely your priority should be to persuade the Australians – apparently more than half – who support the government or think it is not tough enough, that this really is a moral issue and that their government's response is immoral?

All too often, it seems it is more satisfying simply to condemn them. Some advocates, in their rush to claim the moral high ground, stumble into a ditch instead. The Palm Sunday march, impressive for its extraordinary variety of partisans – from the churches, unions, academia, schools and much more – was marred at times by unbecoming notes of self-congratulation and of simplistic condemnation.

“Let's congratulate ourselves” was much too common a motif. The message was that the marchers were the compassionate ones, the moral ones, the real Australians. The implication, well-understood and resented by opponents, is that those who disagree with the protesters are selfish, uncaring and/or racist and/or morally torpid.

Greens Senator Sarah Hanson-Young, for example, descended glibly into political slogans citing a “campaign of hate”, while several speakers explicitly congratulated the marchers for being “the ones who care”. (Former Uniting Church of Australia president Alistair Macrae struck exactly the right note of compassion without reckless criticism.)

Stigmatising half the population is no way to persuade people; it is no way to change refugee policy. Nor do I believe it is accurate. How such a large proportion of Australians came to see people fleeing persecution as illegals, queue jumpers, economic migrants, and a threat to our national economy and security is too big a subject to tackle here, but it is the successful result of malign policy and media slanting.

But I do think Mr Morrison's supporters are guilty of deliberately averting their eyes from what is done in their name. Allowing, as anyone must, that the refugee issue worldwide is an almost insoluble problem of enormous complexity and that the Government must shape its policy carefully, it is nevertheless truly shameful to demonise and brutalise helpless people with all the needless cruelties it deliberately inflicts.

Clearly the challenge to Mr Morrison is far more significant. If refugee advocates are to make real progress – and I have a flicker of hope that the tide is turning – they must rise above a tribal us-and-them mentality. The key is to spark the moral imagination of the masses. I'm afraid I have no idea how to move Mr Morrison.

Barney Zwartz, who recently retired as religion editor for The Age, is a senior fellow of the Centre for Public Christianity

This article orginally appeared at The Drum