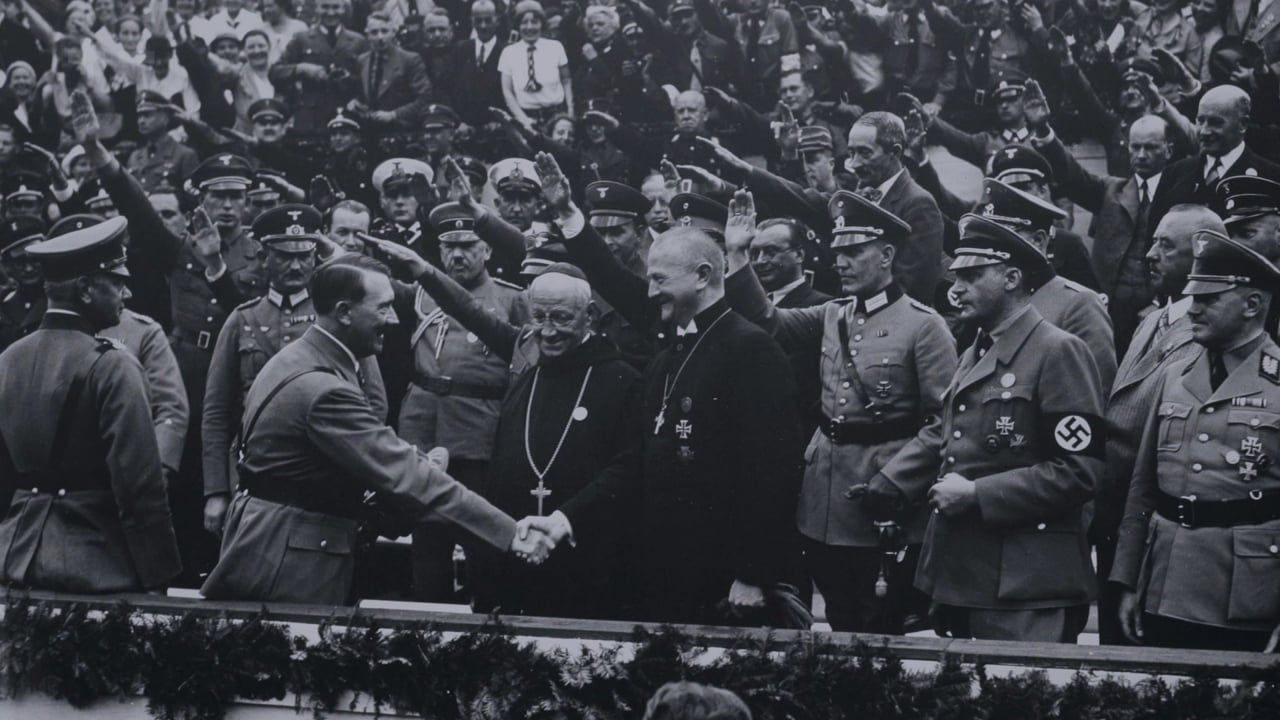 The church under Nazi rule

Dietrich Bonhoeffer is a rare example of someone whose faith prompted him to stand up to Hitler.

Dietrich Bonhoeffer is a rare example of someone whose faith prompted him to stand up to Hitler.

SIMON SMART: These are the Zeppelin Fields in Nuremberg. Between 1933 and 1938 the Nazi Party held six enormous rallies here, drumming up mass hysteria with their promise to restore German pride.

SIMON SMART: This was where Adolf Hitler proclaimed his vision for the Third Reich. And what was the Christian church doing in response to the unfolding madness? Shamefully, not much.

Both Catholic and Protestant leaders played into the hands of the Nazis. In fact, many were enthusiastic supporters, literally waving the flag!

The story of the church under Nazism is one of comprehensive failure. Church leaders clearly wanted a place at the table in Hitler’s Germany, and they fell over themselves trying to align their faith with the party program. In the words of one prominent German pastor, “Christ has come to us through Adolf Hitler. We have only one task – to be German, not to be Christian.” It says it all really!

The German church’s complicity with Nazism is just one glaring example of what happens when the church cozies up to power, at the cost of its core beliefs.

The church’s capitulation to Nazism, is in stark contrast to those who, because of their Christian convictions, stood up to the regime.

They stand out because they were rare. Normal believers “playing in tune” with Jesus’ original teaching, with beautiful and tragic resonance.

JOHN G. STACKHOUSE JR: A minority of German pastors, and some lay people, form what is called the Confessing Church. And they confess that Jesus is Lord, not the Führer – because remember, that’s what it means in German – Jesus is Führer, not Adolf Hitler. And they form this righteous minority of those who are saying we will not go along with the national socialist agenda of bringing all institutions under the power of the state, and particularly of the leader.

SIMON SMART: The story of one of those opponents ended here, at Flossenburg concentration camp.

Dietrich Bonhoeffer was 39 years old, he was engaged to be married, and had a brilliant career ahead of him. But just two weeks before the Americans liberated this place, in an act of cynical cruelty, the Nazi leaders ordered his execution.

Bonhoeffer was a bespectacled, aristocratic church pastor and theologian. He makes for a very unlikely opponent of Nazism, and an even more unlikely conspirator in a plot to kill Hitler.

ERIC METAXAS: He’s a genius, he’s a theological genius, so you’d expect him to be kind of an egg head. But he understood, no matter what we say we believe, if we don’t act on it (in other words if I don’t put my money where my mouth is when others are suffering) then clearly I don’t actually believe these things.

SIMON SMART: As early as 1933, long before most people had an inkling of where things were headed, Bonhoeffer wrote about the church’s obligation to come to the aid of Jewish people in the face of a tyrannical government.

JOHN G. STACKHOUSE JR: Like all Christians everywhere, he believed that we need to bind up those who have been crushed by the wheel of the powerful rolling over them, as he famously put it. But he said something that really made him quite different than most of the Lutherans of his day, who were taught to be compliant with church authority and with state authority.

And he said sometimes you have to take a spoke, a stick, and stick it in the wheel. As if you can imagine a bicycle moving along, you’ve got to stick a spoke in and stop the wheel from crushing people. And that was seditious. That’s literally saying you’ve got to rise up against the established authorities, and make them stop what they’re doing.

SIMON SMART: His famous “spoke in the wheel” comment was an expression of Bonhoeffer’s commitment to “loving your neighbour”. This would eventually place him squarely in opposition to the state that, in his mind, had given up its right to rule.

For him, faith was personal but it couldn’t remain private. Refusing to get involved represented complicity in the sins of the oppressor. “Mere waiting and looking is not Christian behaviour”, wrote Bonhoeffer, “Christians are called to sympathy and action.”

At the height of German military success in 1940, as church bells rang in celebration at the fall of France, he wrote of the church’s failure to suffer for what is right.

ACTOR (DIETRICH BONHOEFFER): The church has witnessed the lawless application of brutal force, the spiritual and physical suffering of countless people, oppression, hatred and murder, and has not found ways to hasten to their aid. The church is the church only when it exists for others.

SIMON SMART: On April 5, 1943 Bonhoeffer was arrested, and later connected with conspirators who tried to assassinate Hitler. He ended up here at Flossenburg Concentration Camp, near Germany’s border with Czechoslovakia.

Bonhoeffer wrote, “When Jesus calls us, he bids us to come and die.” Sacrifice, service, affinity with the victims, courage, and above all, humility. This was Bonhoeffer’s faith. He clearly believed that there’s eternal significance to all that we do, and that belief shaped his responses to the chaos around him.

As Nazi Germany was crumbling, and just three weeks before Hitler put a bullet in his own brain, Bonhoeffer was condemned to death.

At dawn on April 9th, 1945, he was led out here to where the gallows stood and hanged along with his fellow conspirators. His last reported words were, “This is the end. For me, the beginning of life.”

We are left to wonder what might have happened in Germany if more of those who claimed to follow a crucified Messiah had risked their lives to stand up to power.