The First Image of the Cross

It is commonplace to point out how shocking it is that Christians made a ‘cross’ the symbol of their faith. […]

It is commonplace to point out how shocking it is that Christians made a ‘cross’ the symbol of their faith. Crucifixion, after all, was the ultimate punishment in the Roman period, considered even more shameful than the other principal methods of capital punishment, beheading and burning alive. Yet, it has always been taught—in fact, I think I might have taught it—that the cross did not become a popular symbol until the fourth century, after Emperor Constantine banned crucifixion in honour of his newfound Lord. Only then, so the History of Art classes told us, could Christians bring themselves to pictorialise the crucifixion of Jesus.

But new evidence suggests that might not be right. It is true that traditional churches were built in the shape of a cross only in the later period, and that jewelry was later still. But Larry Hurtado, Emeritus Professor of New Testament Language, Literature and Theology at the University of Edinburgh, Scotland, has drawn our attention to tiny symbolic representations of the cross in our earliest Christian artifacts, the papyrus manuscripts of the New Testament. 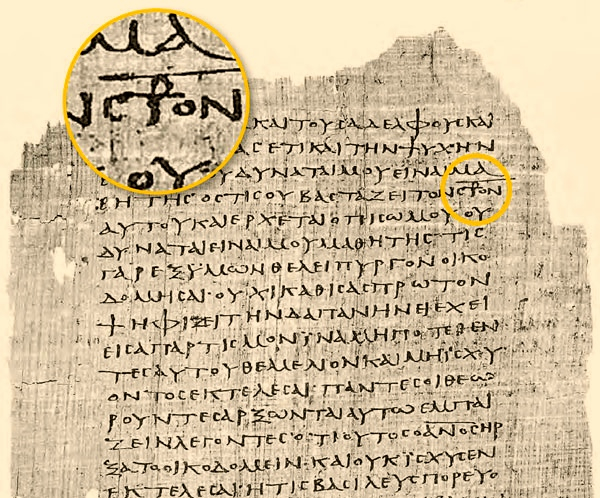 In numerous passages in our earliest manuscripts, scribes altered the Greek word stauros, ‘cross’, to represent Jesus’ crucifixion. They took the letter ‘t’ (written in Greek as Τ) and the letter ‘r’ (written in Greek as Ρ) and ingeniously laid them on top of each other to form what looks like a man on a cross. The image opposite is from a manuscript of Luke’s Gospel known as P75, dated to about AD200. The ‘staurogram’, as it is called, is clearly visible.

The first Christians were fully aware how shameful crucifixion was. They knew that polite Graeco-Roman culture thought it inappropriate, as Cicero firmly pointed out, even to say the word ‘cross’ (let alone pictorialise it). But so convinced were they that through the death of Jesus divine forgiveness could be found that they happily bore the shame of the cross. As the apostle Paul had pointed out earlier, “we preach Christ crucified: a stumbling block to Jews and foolishness to Gentiles, but to those whom God has called, both Jews and Greeks, Christ the power of God and the wisdom of God (1 Corinthians 1:23-24).

We live in a world that is now accustomed to the ‘cross’—in buildings, jewelry, and art. But Easter provides an opportunity to remember the story that the Almighty lifted us high only through descending himself to the lowest point of the world. Grateful for this supreme kindness, thoughtful Christians will be willing—or ought to be—to see the low point as the high point, and to bear public shame for their faith with good cheer.