The necessity and pain of forgiveness

Why forgiveness is not an easy option but a necessary one.

When I was a teenager I went through a stage of loving Charles Bronson movies. Each plot had an appealing simplicity. A heinous, violent crime committed by merciless thugs against helpless (usually) female victims was followed by inevitable retribution carried out with cold efficiency by a steely and mostly silent Bronson. It’s a time-honoured narrative that remains popular with audiences who relish the salacious bloodbath that we all know will come to the evil perpetrators. As viewers we cheer along with the spectacle.

Yet revenge fantasies are not exclusively the domain of hormonally deranged high school boys. Fay Weldon’s novel, The life and loves of a She-Devil, in which a jilted wife gains a slow, meticulously planned, less violent but equally devastating retribution on her philandering husband has been a BBC TV drama and twice been adapted to film.

It seems the desire for revenge comes naturally to us and taps into a deep-seated urge to want to see harm come to those who hurt us. It’s a common enough story that is played out across the world every day between countries and tribes, among families and former friends—careless or deliberate harm done, leading to fulfilled promises of revenge and retribution.

For Jacoby, revenge is natural and self-satisfying, and needs to be acknowledged as the legitimate response of the victim

There are plenty of people willing to explicitly defend the desire for revenge. In her book Wild Justice, Susan Jacoby argues that revenge stems from, “a need to restore ‘something missing’ – a sense of physical and emotional integrity that is shattered by violence.”1 For Jacoby, revenge is natural and self-satisfying, and needs to be acknowledged as the legitimate response of the victim. To suggest otherwise is to rob the victim of their dignity. Philosopher and law professor, Jeffrey Murphy writes, “I think that most typical, decent, mentally healthy people have a kind of common sense approval of some righteous hatred and revenge.2

Revenge may well be natural, but is it desirable? Might it not be the case that in the act of revenge both parties are in some way diminished? Or, as Miroslav Volf argues, revenge, far from being a release, actually enslaves us.3  Martin Luther King Jnr., who must have known injustice and hatred better than most said:

For King, the answer to breaking the cycle of destruction lay not in seeking revenge, but in love and, importantly, forgiveness. True forgiveness is complex and rare. It might even sound quaint and absurd to mention the word in the face of high stakes where terrible wrongs have been committed. But it might also be a force of great good, both at a personal and societal level.

Friedrich Nietzsche thought forgiveness was a sign of the weak making a virtue out of necessity. It’s important to be clear on what forgiveness is and what it is not. Forgiveness is not condoning, excusing or forgetting. It is rarely a single act but more like a process. It involves an honest confronting of wrongs committed and, finding ways to overcome attitudes of resentment and anger felt in response to injury and wrongdoing.4

All around us is evidence of the benefit of forgiveness. Experts point to the poison of unforgiveness in creating long-term psychological damage and even find links with physiological problems like cardiovascular disease, high blood pressure and cancer. Forgiveness, when people can manage to do it, restores broken relationships, and heals damaged communities.

‘The first, and often the only person to be healed by forgiveness, says Lewis Smedes, ‘is the person who does the forgiving

As hard as it might be to let go of resentment and anger, when we are victims of wrongdoing we do ourselves no favours in the long term by harbouring and fostering destructive emotions. ‘The first, and often the only person to be healed by forgiveness, says Lewis Smedes, ‘is the person who does the forgiving … when we genuinely forgive we set a prisoner and then discover that the prisoner we set free was us.’5

Forgiveness is not an exclusively a Christian idea, but it finds its sharpest articulation in the person of Jesus. His radical call to ‘love your enemies’; his famous words from the cross, ‘forgive them Father for they don’t know what they are doing’; the prayer he taught, ‘forgive us our sins as we forgive those who sin against us’, all point to a key part of his teaching and his life.

That he spoke into an atmosphere of an oppressed people for whom revenge was such an appealing thought makes him all the more remarkable. He turned the hope of revenge on its head; calling followers to not only forgo revenge, but to forgive without limits. (Matthew 18:21 – 22; Luke 17:3-4). Those who follow the Christian faith have a firm basis and motivation to aim for the high ideal embodied in its founder.

As with all that Jesus’ said, his teaching on forgiveness has powerful practical application, the wisdom of which is recognised not only by convinced followers. Trudy Govier, in her study on revenge and forgiveness argues that a campaign for revenge entails necessary self-damage, because it brings the victim to the same level as the offender. To act out revenge is wrong ‘because we have to indulge and cultivate something evil in ourselves,’ she says.6  Forgiveness on the other hand, something Govier believes is equally significant for believers and non-believers, allows for release from resentment and guilt and the opportunity for repaired relationships. Interestingly she thinks this can apply to groups as well as individuals. 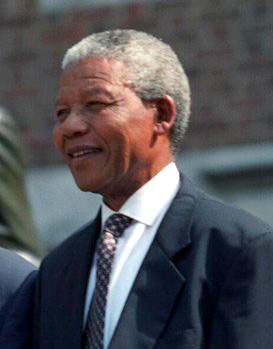 There have been some unlikely and conspicuous examples of forgiveness, but none more so than that of post apartheid South Africa. When the edifice of segregation and white power began to crumble, many anticipated a bloodbath as Black African leaders assumed control of the country. The stage was set for the type of violence we have became used to hearing about in places like the Middle East, Sudan, Bosnia and Northern Ireland.

Mandela, emerging from 27 years of imprisonment, could have been excused for wanting payback. But he took the lead in urging cooperation and peace with his people’s white oppressors. The new President’s frequent gestures of forgiveness, such as offering his white gaoler a position of honour at his inauguration came to mark a challenge to his people to follow in the same spirit. Mandela saw forgiveness as the only way forward.

The Truth and Reconciliation Commission (TRC) set up in the new South Africa might be the best example of how forgiveness can work at both a personal and political level. Seeking a way through the mire of violence, atrocity and injustice that marred the country’s past, the Commission aimed for a way forward to peaceful reconciliation. Determined to avoid the mistake of sweeping past crimes under the carpet, but not favouring the Nuremburg model, the TRC offered amnesty to those who would own up to crimes and violations of human rights. Full public disclosure was required to gain amnesty, and crucially, the victims (or their families) were given a voice.

The history of the Commission makes for extraordinary reading. There are many stories of harrowing loss, the pain of the victim and grinding guilt of the perpetrators. The power of public confession and the accompanying release of anguish this brings was powerfully on display. Most notable were the extraordinary moments of forgiveness that offered something like a balm to the unspeakable hurt that had transpired. Chair of the Commission Archbishop Desmond Tutu named his book on this important chapter of his life and the life of his country No Future Without Forgiveness. While politicians and lawyers aimed for non-violent co-existence, Tutu and other spiritually oriented people sought something far more ambitious. Tutu spoke of the hope for true reconciliation where alienated parties would be restored to relationship. This, notes Govier, was a much more emotionally rich and ambitious goal.

Tutu’s work was inextricably bound to his Christian faith, and he frequently spoke of his belief that ‘only because God had reconciled us to him by sacrificing his Son Jesus Christ on the cross did true and lasting reconciliation between humans become possible.’ For Tutu, it was forgiveness that made possible a future worth living.

In his book Tutu tells a story out of the U.S., of Marietta Jaeger, the mother of a seven-year-old girl, Susie, who was brutally and callously murdered. In the 20 years since her daughter’s death, Marietta has worked with victims of violent crimes, and she says her experience taught her that while initial natural and valid rage is the right of the victims, those who hold on to a vindictive spirit in the end give the offender another victim. ‘Embittered, tormented, enslaved by the past, their quality of life is diminished. However justified, our unforgiveness undoes us. Anger, hatred, resentment, bitterness, revenge – they are death-dealing spirits. And they will “take our lives” on some level as surely as Susie’s life was taken. I believe the only way we can be healthy, happy persons is to forgive,’8 she says.

I would have to admit to finding the act of forgiving easier to talk about than put into practice. When I think of extreme examples of deep wrongs committed against innocent people, I have what I suspect is a fairly common aversion to talk of forgiveness. Susan Jacoby thinks that the Sermon on the Mount’s call to ‘love your enemies and bless those who curse you and do good to those who hate you’, sets up an idea that is morally beautiful but humanly unattainable,’ and I have some sympathy for that view. But I also recognise that in our homes, our marriages, within families and communities, forgiveness is badly misunderstood and much needed. Described as the ‘final form of love’ by Reinhold Niebuhr, forgiveness remains the most powerful antidote to bitterness, destructive patterns of pay-back and recrimination, and paralysing resentment. Humanly unattainable in some contexts it may be; divinely inspired and enabled we hope it is. Forgiveness remains a vital element of much needed change in the lives of both individuals and communities.