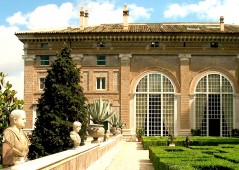 The necessity of an extravagant creation?

The Biennial Conference in Philosophy, Religion and Culture, was held in Sydney in late 2010. The theme was ‘Creation, Nature and the Built Environment’. Scholars presented a broad range of papers from various fields: physics, theology, the visual arts, film, urban design, literature and philosophy.

CPX Fellow, Jenny Ihn was there.

Could it be that ‘sensing pleasure’ is a key contributor to our physical and inner well-being? A paper from Raichel Le Goff from Newcastle University titled, ‘The Villa Madama: Clement VII’s Sanctuary of Beauty’, got me thinking about this.

The Villa Madama, located a few miles north of the Vatican was designed by Raphael and was completed by his students for the Cardinal Giulio de’Medic, then Pope Clement VII. The design of the Villa was an attempt to reclaim the aesthetics of Neo-Classicism that endorsed balance and simplicity. It’s grand scale, symmetrical precision and the harmonious balance between nature and the built environment was intended to be an irresistible invitation to retreat and rejuvenate in its midst.

What caught my attention during the presentation was the somewhat ironic way in which platonic philosophy had been appropriated in the structural design of the Villa. Fundamental to Platonic philosophy is the hierarchical dualism between the material and the spiritual realm. Plato advocated that the pinnacle of human existence was to transcend one’s lowly bodily existence and move towards a higher spiritual realm. Raichel Le Goff’s description of the garden as a ‘private realm within a realm’ suggests a shift of focus from an external sensing realm towards an inner private realm—in other words, the platonic aspiration to transcend the material. The irony lies in the fact that in order to achieve this, we needed the actual garden.

Platonic philosophy is dehumanizing, precisely because it does not correspond to the way we experience our world. It is not uncommon to experience pleasure in a garden or be moved by a piece of art. Many people find healing through the creative arts. In other words, things that belong to the material world do have the power to meaningfully impact human beings. Seen in this way, some of what ancient Greeks taught undermines the holistic nature of our make-up as physical and spiritual beings, and creates an unnecessary wedge between one’s external and internal existence.

By way of contrast, according to the Christian Worldview, physicality and sensual pleasure is essential to the human experience, precisely because of the way the Creator has made our world. Our physical makeup, including our ability to seek and find pleasure, rather than being something to be transcended, is a core part of who we are.

Here we see that the Creator gave humans more than what they needed to merely breathe and physically function. He gave every tree that is good for food and pleasing to the sight. His provision was not the bare minimum but a lavish gift. The abundance of the Creator wasn’t an obligation to be performed nor a random act of kindness but a necessary act of his will in light of his wider plans and purposes for the world. He created the world to be a place full of beauty and joyful abundance for the sake of human beings. There was no need to entertain our vision with a world full of beauty but the Creator freely chose to do so. In other words, sensing pleasure through the material world, was built into the biological make-up of human beings by the Creator.

This is an extremely positive message that urges us to go and feel the pleasure of creation: to explore the material world that is given to us; to gaze through a window where beauty fills our field of vision. Such action will delight us. It will also mysteriously humble us because it can lift our vision upward and invite us to become part of a narrative much larger than our own.

Lastly, we all know of the fleeting nature of delight or pleasure. It suddenly comes with awe and wonder and abruptly disappears. It leaves us with a vacuum, a sense of incompleteness and a yearning for more. This insatiable longing, in my view, is precisely the point of the necessity of sensual pleasure. It is necessary not only because of the way we are biologically created but also because it creates within us a space for hope. In the narrative that pleasure presents to us, we are confronted by a tangible reality that is highly suggestive of a future that is distant, but at the same time strangely close by.

In our present world where the ugliness of pain and suffering resides, sensual pleasure is needed because from time to time, it brings into stark contrast the ugliness of our broken state and offers a new hope which we all intuitively long for. It expresses and instills in us a thirst for an existence where completeness and beauty will be an overriding reality. This notion of hope is most clearly expressed in what is at the heart of Christianity’s worldview, namely the promise of redemption not only of souls but bodies as well. This is the movement of the narrative of Christianity—creation to new creation!

Jenny Ihn is an artist, a CPX Fellow, and is studying a Master of Fine Arts at the University of Sydney.