The Scream of the 21st Century

Has the 20th Century's angst and sense of alienation carried over to the 21st?

Artists, writers, filmmakers and playwrights in the 20th Century often reflected in their work a sense of alienation, of being alone in a hostile and dystopian world. There was a feeling of bleakness about the present and frequently an apocalyptic vision of the future like Orwell’s “1984”. Other examples are Colin Wilson’s “The Outsider”, Graham Green’s fascinating but sad explorations of the dysfunctional interior worlds of his anti-hero’s like the man in “A Burnt Out Case”. James Dean played to perfection the iconic outsider in the film “Rebel without a cause.” The existentialists like Camus explored the possibilities of finding meaning in decision and moral action but, as in his novel “The Plague”, in the end it all seemed pointless, the plague won. Francis Bacon’s paintings of a screaming Pope captured in disturbing images the angst of his contemporaries. Samuel Beckett’s play “Waiting for Godot” summed up the feeling of the times: we are alone in an unfriendly world and there is no point in waiting for God to turn up again, he is dead!

Has this sense of alienation continued into the 21st Century, or have we become so used to the absence of God and any greater meaning and purpose to our lives that the mood has significantly changed? Or are we just expressing the absence and aloneness in different ways? 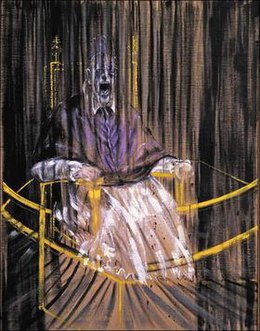 Two paintings by 16th Century Spanish artist Velazquez, The Crucifixion and the portrait of Pope Innocent X, were the inspiration for Two 20th Century painters, one English, Francis Bacon, the other a fellow Spaniard, Antonio Saura. But they produced images that were much more disturbing than Velazquez. They are paintings that express and reflect the twin anxieties of their times: the loneliness of the modern self and the horror of human violence and brutality. They had lived through the Second World War, the Jewish holocaust, the nuclear destruction of Hiroshima and Nagasaki, and Stalin and Mao’s totalitarian regimes. These two regimes brutalized thousands and forced the mass starvation and death of over 40,000,000 people in the Ukraine and China. The list goes on.

Bacon’s Pope distorted into an endless silent scream of horror and alienation is his response to this. The author J G Ballard describes Bacons paintings as ‘screams from the abattoir’, ‘cries from the execution pits of World War II’1. His deranged executives and his princes of death in their pontiffs’ robes lacked all pity and remorse. His Popes screamed because they knew there was no God2.

Artists like Bacon reveal with stark honesty the high cost of living in a reality that excludes God. Perhaps because of their sensitivity they are more willing to face and express the nihilistic implications of their loss of faith. Antonio Saura’s crucifixion series reflects the same themes.

Saura’s crucifixion is confronting. It captures not only the physical brutality of torture and death but the malevolence of the evil that is its cause. The figure is distorted to the point of transformation into that which caused its suffering. The violence and cruelty, the aggression and arrogance of human evil has become concentrated in the crucified figure. He has become what has afflicted him!

Saura made this comment on the painting: ‘Through this image of the crucified, I wanted to depict my own situation of being alone in an unfriendly world that one can only react to by shrieking. On the other side of the mirror, however, I am also interested in that absurd tragedy of the man—man not God—nailed to the cross. That image … could be seen as the tragic symbol of our age.’3

Ironically, while Saura has created a brilliant graphic description and visual explanation of substitutionary atonement, according to the comment above, he sees in the crucifixion only the symbol of the terrible suffering man has afflicted on his fellow man.

For me his painting does far more. It certainly is a confronting symbol of man’s cruelty to his fellow man—our tragic dilemma. But it also powerfully reveals the meaning of Christ’s death as the NT explains it, that he bore our sin and evil, became sin for us, that we might be forgiven and reconciled with God. According to the Christian view of the world, it is only by embracing this meaning are we able to be set free from the guilt of our complicity in the tragic dilemma. Only by embracing God the Holy Spirit are we able to find an inner transformation that can overcome the heart of darkness that is in us all and find in restored relationship with God, the answer to our sense of alienation and our despair at humanity’s condition.

Over sixty years earlier the Norwegian artist Edvard Munch (1863 – 1944) painted his famous scream series that visually, expressed the beginning of Western culture’s sense of alienation, a feeling that was to become the constant dull ache of the 20th century.

So, does the 20th Century’s angst and sense of alienation carry over into the 21st?

My own view is that it does but in a different way. The people of today’s world are not conscious of the loss of faith because they never had it to lose. Their anxieties are prompted by secondary losses, those that grew out of the loss of faith by the previous generations, like the loss of the values that were based on the Christian faith. Parents with a vague memory of past values feel alienated from their children as if they are from another planet. The whole discussion today about values in education is a reflection of this. It is illustrated by the decision of a third of Australian parents choosing, at significant cost, to send their children to private faith-based schools. In most cases the faith issue is secondary. What parents want is a more disciplined education and what they vaguely perceive to be ‘good values!’

There is a general uneasiness about the loss of cultural unity and identity, an anxiety about what is an Australian or French or English or Indian identity now. Multiculturalism, large-scale immigration both legal and illegal from cultures with a vastly different world view are raising the old xenophobic fears. The so-called ‘clash of civilizations’, international terrorism, and uncontrolled people movement are creating significant anxiety and one that people feel they can not express publicly.

The British film, “The Children of Men”, picks up this theme with its bleak apocalyptic scenario of a Britain that is virtually an armed fortress against the avalanche of refugees from a Europe that has descended into chaos. A sign daubed on a wall reads, ‘the future is a thing of the past’. The South African film “District 9”, that describes the arrival of aliens in Johannesburg, also picks up this theme and raises the issue of the contradictory nature of humans. The treatment of the aliens by the Africans is a fascinating parable of a repetition of apartheid by the very people who fought to free themselves from the first apartheid. The same issue is being played out in real time now in Palestine. The scream of frustration at our inhumanity and stupidity goes on!

There is also a deep unconscious dissatisfaction created by consumerism. The media marketing monster, inextricably entwined with popular culture, creates a constant desire for new acquisitions, something better than what we have now. But when we get it we are still not satisfied. This breeds an underlying angst and dissatisfaction, a feeling that we are constantly being conned. TV shows like Australian Idol have now created a fantasy world that claims to make any one a star or celebrity.

In the disturbing film “Fight Club” * the writer puts these words into the mouth of Jack, one of the disillusioned young men trying to find some reality and authenticity in their empty consumer lifestyle through the violence and pain of the Fight Club. The idea is that only in this extreme experience can one feel really alive. ‘We are the middle children of history—no purpose or place. There is no great war for us to fight, no great depression. Our great war is a spiritual war. Our great depression is our lives. We’ve all been raised on Television to believe that one day we’ll all be millionaires, and movie god’s and rock stars. But we won’t. We’re slowly learning that fact. And we’re very, very pissed off.’

“American Beauty”* taps into this same theme of despair and middle class angst at the superficiality and ephemeral nature of the consumer culture where the wrapper seems to have become the reality.

Quentin Tarantino’s films like “Pulp Fiction”*, “Kill Bill”, and “Inglorious Basterds” are intriguing but unsettling with their violence and postmodern, non-linear story lines. Their references to other films point to the incestuous and self-referential nature of the media. Is our ‘reality’ just a construction of the media like “the Truman Show?” Their ironic and dark humour reflects a feeling of the absurdity of our world and its absence of any meaning or truth foundation.

These examples show that the artistic production of dystopian prophecies and apocalyptic visions, and cries against man’s inhumanity and screams of despair are still very much with us in the 21st C., but they have a new edge, a new factor. We have moved from the loss of faith and angst of modernity to the confusion of post modernity. Not only does God not exist but there are no other foundations or objective truths and realities either. My interpretation may be quite off the mark and it may be that the children of the 21st C are simply indifferent, that the scream has been replaced by, “whatever!” It is certainly true that by far the most viewed media today is computer games* and the most watched conventional films are fantasy like “Lord of the Rings” and “Harry Potter”! Perhaps as Neil Postman said of the 20th C post TV generation we are still just amusing ourselves to death.

What does all this mean?

This generation, unlike the previous one, may not know what they have lost but the vacuum, the absence is there, the longing is there. It’s my view that by working back from the ‘secondary losses’ people may become more aware of to the primary loss.

Quoting Camus or Orwell may not provide a connection to the cry of the 21st Century generation but exploring contemporary art and film may. Film and the electronic media is the principle way in which this generation receives its cultural and artistic expression. Raising people’s awareness to what they are feeling and responding to, in a film like “American Beauty”, and identifying what is being expressed, can provide real insight and personal identification with a collective and individual need or loss. It’s that loss that the Christian Gospel still speaks to in ways that can be powerful and uplifting.

In response to the reaction of some people to the suffering and apparent futility of our world, Richard Holloway wrote:

All who mutter quietly or those who lift up their voices to scream a howl of despair at the world, can no doubt relate to this statement. This is the real stark alternative to belief in God, or the absence of belief in the living God. To face the implications of that is both brave and necessary.

Peter Corney is an Anglican Church Minister, an author of nine books and a leadership consultant to churches, schools and Christian organisations.

(* I am aware that a number of these films were made at the close of the 20th C and right on the cusp of the 21st. The time frames of cultural change merge into each other.)