Time for some nuance between the gay and the god-fearing

John Dickson calls for a new tone in discussions between religious believers and the gay community.

This week’s Mardi Gras parade reminds us how far Australia has come since the dark days when gays and lesbians were legislated against and openly vilified and when all conversation about the rights of individuals to form their own views about sex were shut down. We no doubt have further to go before homosexuals fully experience the acceptance in society they deserve, but some of us are wondering whether the noble march toward the end of discrimination has inadvertently damaged our moral imagination and limited the public conversation.

Contemporary minds are fixed to think of only two possible camps on the gay issue. Either you are pro-homosexual and therefore open-minded, kind and respectful, or else you are a mean-spirited, homophobic bigot. You are either for me or against me. No space is given to a third group, much larger than the current discourse allows, made up of people who sincerely want an end to discrimination and who show nothing but care and respect toward gay friends but whose deeply held convictions prevent them from endorsing same-sex practice. This last clause may get the blood boiling for some, but perhaps that underlines my point. Some of us are unable to imagine how you can care for someone and disagree with their lifestyle at the same time. 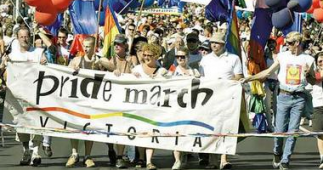 For me, a turning point came with a David Marr appearance on ABC’s Q&A program. Angela Shanahan, a columnist with The Australian, had tried to explain the traditional Catholic view that God proscribed homosexual practice but still “loved all his creatures”. Marr seized the moment. “You people,” he said in a tone that got the audience laughing in nervous anticipation. “You people have no idea how unspeakably cruel you are.” He mocked the ‘poetry’, as he called it, of God loving gays but banning their sex and concluded amid rising applause, “I have no patience with it anymore. It is just bigotry and cruelty and hatred.” The argument was over.

It was a powerful moment, and many thoughtful Christians realized the significance of it. We have entered a day when, for David Marr and many others, holding to the historic Christian teaching on same-sex activity is itself an evil, an act of bigotry, cruelty and hatred. His language was more measured but his most recent Herald piece addressing this topic, “Sacking the Sinful”, was full of very loaded descriptions of the church leaders featured—all of them nervous, pent-up and narrow-minded. What else could they be if they thought homosexuality ‘sinful’! I know and respect each of the people interviewed for the article but I found myself disliking Marr’s version of them.

Perhaps in the tradition of ‘an eye for an eye’ the church deserves some purgatorial derision. No one could deny that professed Christians have used very condescending and spiteful language toward gay people (and, shamefully, sometimes even resorted to violence). But tit-for-tat won’t help us in the long run. The biblical perspective on sex—that all sexual intimacy outside heterosexual monogamy is contrary to the Creator’s good intentions—is not going anywhere; and nor are our gay neighbours. This realization alone demands that we work out together how to have a respectful, nuanced public conversation.

In particular, we have to ask whether holding a moral view is in itself hateful. Obviously, strong moral codes, whether religious or secular, can promote hateful speech and behaviour, but are the codes inherently hateful? Specifically, I want to ask David Marr: Do you not believe it is possible to profoundly disagree with someone’s lifestyle and sincerely care for them all the same? I am not offering a defence of Christian teaching on homosexuality (which may, of course, be wrong); I am simply affirming that believers ought to be able to hold their view thoughtfully and respectfully without being considered ‘bigots’ and ‘homophobes’.

This is where I think we could learn from the moral genius of Jesus. He had the ability to hate the sin and love the sinner. I know that sounds clichéd today—David Marr scoffs at the aphorism—but perhaps that’s because we have forgotten how to do it. For all our talk of open-mindedness, many have great difficulty seeing how you can dispute someone’s moral stance or behaviour and love them simultaneously. This shows itself in much contemporary discussion of both religion and ethics. If a Christian says she thinks Islam is untrue, she is heard to be demeaning Muslims—and vice-versa. If a preacher condemns materialism as immoral, he is heard to be saying materialists aren’t worthy of friendship. And, of course, anyone who questions the moral status of same-sex activity is thought to be hateful and homophobic.

There is a failure of ethical imagination here, an inability to utilise two mental muscles at the same time: the muscle of strong conviction and the muscle of compassion for all. Jesus was the master of this ethical exploit. Open the Gospel of Luke at chapter 13 and you’ll hear him condemning certain behaviour and warning of coming judgment. Continue through to chapter 15 and you’ll find him wining and dining with ‘sinners’—those you might have thought were first in line for judgment—and illustrating the point with a parable about a father’s love for his prodigal son. Keep reading to the end of the story and the point is made with disturbing clarity: so seriously did Jesus take sin that he thought he had to die for it; so seriously did he love sinners, a category in which he placed us all, that he thought he had to die for them. He was able to be morally exacting and deeply compassionate toward the same people at the same time—though it is a sad and undeniable fact that many in the church since have had difficulty emulating the feat.

But there is a third way, based on a different logic. We ought to be able to love even those with whom we profoundly disagree

There are weaknesses in both incarnations of the logic. The weakness of the religious version is its inability to love beyond the borders of its moral convictions; hence the hateful speech, and sometimes violence, of old-time religion against gay people. The weakness of the secular version is an aversion to speaking about ‘morality’ in the first place, especially in the area of sex. Ironically, this too can lead to impatient denunciations, such as Angela Shanahan endured on Q&A.

But there is a third way, based on a different logic. We ought to be able to love even those with whom we profoundly disagree. It must be possible for Christians to question the moral status of sexual intimacy outside heterosexual monogamy while demonstrating respect and care for neighbours who are neither heterosexual nor monogamous. True open-mindedness is not merely accepting as true and valid someone else’s viewpoint; it is the more difficult and noble commitment to honouring people whose viewpoints you reject.

Thoughts naturally rush to other important matters. Why does the church oppose gay marriage? Why should religious schools and organisations be exempt from certain employment laws? And what possible grounds could there be anyway for the Christian critique of same-sex activity? These are good questions which must be tackled carefully. My point is more basic. For all the important advances we’ve made in this area in recent years, some of the associated rhetoric has damaged our ethical imagination to the point where agreeing with Christian teaching on same-sex activity equals cruelty and hatred. It’s time for a more thoughtful and open conversation.