On the tenth anniversary of the September 11, 2001 terrorist attacks (9/11), the national memorial to the dead victims will be unveiled. Reflecting Absence is a sombre memorial that consists of two pools marking the ‘footprints’ of the twin towers of the former World Trade Centre (WTC). Set in a grove of trees, the pools will be bordered by inscriptions of the names of the some 2,800 victims of the attacks.

But Reflecting Absence won’t be the only structure in the revitalised WTC plaza commenting on the legacy of 9/11. There’s also the Freedom Tower, due for completion in 2013. It’s not a memorial per se, but an office block. But the triumphant story attached to the tower amounts to a victorious statement of national resilience in the face of terror. That story prevents Reflecting Absence, and its language of grief and loss, from having the last say on 9/11. 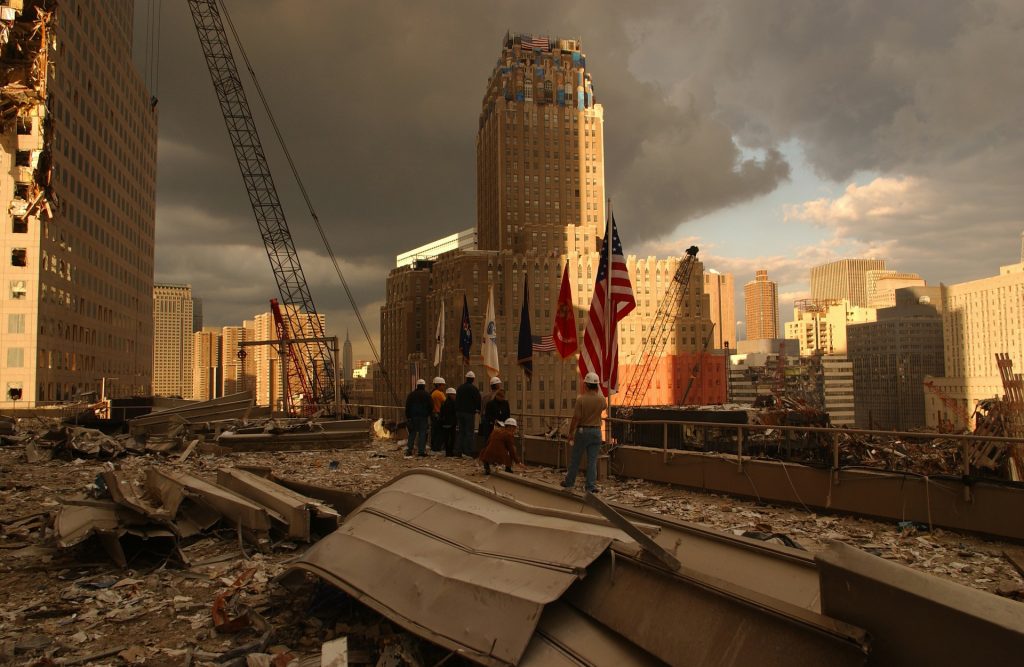 This story is one of American exceptionalism, which is characterised by the belief that American values of freedom and liberty, and the nation’s democratic institutions, represent something unique and commendable in the world today. America’s distinctiveness thus qualifies the nation for a special destiny: to be a “city on a hill”, in the words of one of the nation’s Puritan forefathers, that would provide an example to the rest of the world. The exceptionalist narrative reaffirmed American belief in its values and strengthened national resolve after the attacks revealed the nation’s vulnerability.

Exceptionalist themes underwrite the conceptual design of the Tower—part of the master plan for the revitalisation of the WTC site put forward by Daniel Libeskind, who also designed the Jewish Museum in Berlin. For one, it reaches 1,776 feet into the sky in echo of the year America declared its independence from Britain. The Tower’s explicit citation of the nation’s triumphant past makes implicit reference to the constitutional freedoms—of speech, religion, assembly and the press—that would come to characterise America’s fledgling democracy.

Libeskind also meant for his Tower to evoke the Statue of Liberty via an asymmetrical spire that would mirror Lady Liberty’s arm that holds aloft the torch of freedom. The project statement accompanying Libeskind’s designs described his excitement upon spotting the Statue when he first arrived in America. His intention, then, was to honour the country that first welcomed him in, and that extended its promise for freedom and opportunity—other elements of the exceptionalist narrative—to countless other immigrants like him.

These references to the American Year of Independence and the Statue of Liberty resulted in the then Governor of New York George Pataki dubbing Libeskind’s design the ‘Freedom Tower’. Today, the more neutral ‘One World Trade Centre’ is increasingly replacing this name. Additionally, current blueprints of the Tower obscure Libeskind’s reference to the Statue of Liberty since concerns over how to secure the off-centre spire resulted in its redesign. So the Tower is, to some extent, detached from the exceptionalist rhetoric with which it was conceived.

But informally, the Tower is still regarded as a symbolic means of reaffirming American strength and triumphantly demonstrating the nation’s resistance against terror. Its stark contrast to Reflecting Absence symbolically recodes the defeat of 9/11 into victory, which results in the WTC site playing host to divergent modes of remembering the event.

Arthur Danto writes that we erect monuments so that we will always remember, and build memorials so that we will never forget. His point is that memorials are usually attached to defeat, whereas monuments are about victory, which explains their triumphant forms. Clearly, Reflecting Absence is 9/11’s memorial. It tells a sombre story that foregrounds the loss of innocents caught up in events beyond their control. The Freedom Tower, on the other hand, rises to pierce the sky in an emphatic statement about the strength of the national character, and represents the reconstitution of the American narrative.

Shame, then, that the Freedom Tower doesn’t live up to its glorious name.

Security concerns over the Tower—and its likelihood as a terrorist target—prompted its redesign in 2005. Now, current plans for the Tower involve its erection on a structure designed especially to withstand car bombings: a 200-foot pedestal of steel-reinforced concrete clad in shimmering glass panels. As John King wrote in the San Francisco Chronicle at the unveiling of the Tower’s redesign: “So this is what it comes down to: 20 stories of windowless fear.” King’s point is that the insecurity of the Tower’s design introduces an anxious edge to its vaunted claims about freedom. If this is democracy in built form, it doesn’t seem particularly robust.

And if that’s the case, why build anything at all?

Because, obviously, something must be built to replace the absence of the WTC twin towers in the Lower Manhattan skyline. To leave it empty seems too much like concession, defeat. National recovery might not seem as evident without the construction of an even bigger and better tower than the two that were felled on 9/11. After all, isn’t this is how we demonstrate progress?

Not so, suggests cultural critic Homi Bhabha. Writing in the aftermath of 9/11, he suggests a “vision of the Unbuilt” might serve us better. He draws this concept of the “Unbuilt” from Ludwig Wittgenstein, who deploys this architectural metaphor to capture the West’s pursuit of progress. Wittgenstein argues that Western culture is forever “occupied with building an ever more complicated structure” because it measures ‘progress’ in the construction of victorious forms. It does this at the expense of ‘making progress’—which, following the metaphor, is not so much about “constructing a building, as in having a perspicuous view of the foundations of possible buildings.”

Real ”making progress” is found in the actions of the fire fighter who ascends the twin towers to save others.

Bhabha explains that Wittgenstein is talking about the need for a generous and expansive idea of progress—“the foundations of possible buildings”—that is obscured by the progress often commemorated in vertical, triumphant forms: victory in war, the power and might of a nation. Tall buildings, then, are not necessarily a marker of development. Instead, Bhabha finds that real ”making progress” is found in the actions of the fire fighter who ascends the twin towers to save others, despite the danger to his life. The Unbuilt, then, is not progress measured in terms of onward or upward thrust; rather “progress here is a lateral or adjacent move toward the stranger as toward the neighbour.”

Perhaps this is what Jesus meant when he called upon us to love each other, even when it proves costly. He, like Bhabha, I suspect, is saying that a life offered in love is always a victory, even though it may be wrapped in defeat. And maybe something that captures this contradiction is the most fitting way to remember 9/11 since Reflecting Absence might prove too sombre an epitaph and not even the Freedom Tower believes its own hype. It’s not clear what that might be, but it would be something worth (Un)building.

Dr Justine Toh is a Senior Research Fellow at the Centre for Public Christianity and an Honorary Associate of the Department of Media, Music and Cultural Studies at Macquarie University.

This article originally appeared at ABC Religion and Ethics.