Unto us another child is born

Mark Stephens on what Monty Python's Life of Brian continues to say about belief in our world today.

“It’s quite humbug to say that this is not a ridiculing of the founder of the Christian religion and of the Incarnation, in an extremely tenth-rate way,” wrote journalist and author Malcolm Muggeridge at the release of Monty Python’s classic comedy, Life of Brian.

This year is the fortieth anniversary of the film that was courting controversy even before it was made. The head of EMI Films, Bernard Delfont, pulled funding because the script was “obscene” and “sacrilegious.” Yet it’s hard to know how much Bernie understood this subject, given that he seems to have thought Monty Python was a real person.

Having been handed a funding lifeline by George Harrison (yes, the Beatle), when the film finally came out it unleashed a wave of protest. A New York pastor named Roger Fulton branded the comedy troupe as “Monty Snake.” In Britain the Festival of Light managed to get several councils to pull the film on religious grounds, sometimes without a single alderman ever having viewed it. The Anglican bishop Mervyn Stockwood spat out the canard that “you’ll get your thirty pieces of silver,” a reference to Jesus’ betrayer. Even the Rabbinical Alliance of America were repulsed by the poorly chosen use of prayer shawls.

Yet in the ensuing decades, the film has come to be much loved by biblical scholars, and by a good many ordinary Christians as well. 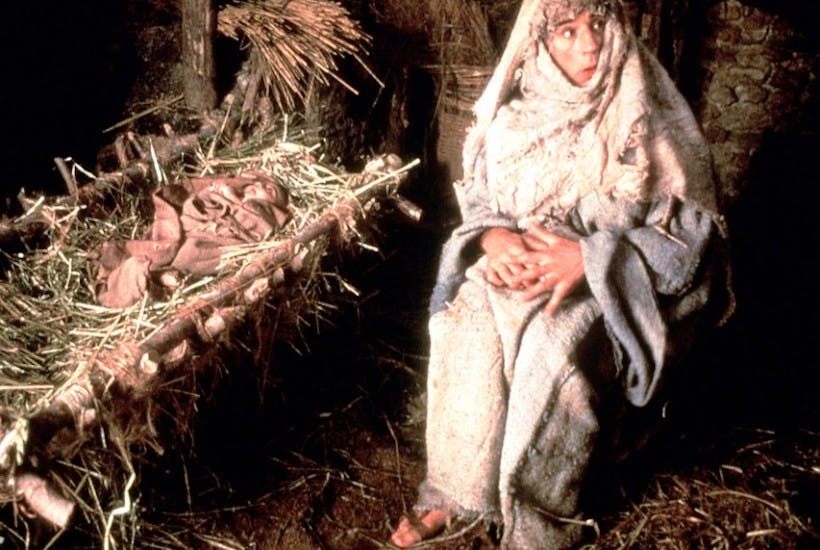 In one sense, it isn’t really a Jesus film. The central character is Brian Cohen, born at the same time as Jesus, but he’s not the Messiah. Much to his frustration people continually mistake him for the Saviour, beginning even with his birth.

And then it all falls apart. Turns out the Magi went to the wrong manger. It’s all so gloriously farcical. But at least the really important question does get asked: What is myrrh anyway?

This opening presages how the entire film works. Made by educated comedians with a taste for the absurd, the film routinely swings between sharp historical allusion and outright stupidity. It is well-known that the Python team did their research, if only to work out how to take the mickey even better.

When a character mishears “Blessed are the peacemakers” as “Blessed are the cheesemakers” another jumps in to interpret: “Well obviously it’s not meant to be taken literally, it refers to any manufacturers of dairy products.” It seems the Python team have been subjected to some questionable biblical interpretation in their time.

At the essence of the Life of Brian is merciless satire. It sends up British public school education. It lampoons trade union meetings of the 1970s. But most of all, it swings hard at mindless religious belief. Perhaps my favourite scene is when Brian is pursued into the desert by a crowd:

Brian: I’m not the Messiah

Devotee: I say you are, Lord, and I should know I’ve followed a few

That’s it right there, the problem we so often have with religion. Faith can seem so mindless, so credulous when credulity has not been earned. Because it isn’t easy to believe. But this goes for all of us religious and irreligious alike. We all find it hard to discover something worth believing in.

Life of Brian can actually prove a helpful tool for deepening, not weakening, faith.

In a famous interview on the BBC, John Cleese summarised the message of the film thus: “Make up your own mind, don’t let other people tell you.” Yet there is an irony here. As a summons to think critically about religion, Life of Brian can actually prove a helpful tool for deepening, not weakening, faith.

In the controversy that swirled around the film after its initial release, Cleese lamented that his public-school education had delivered him 10 years of insipid Christianity which insulted his intelligence. That sentiment seems to be shared by many of his generation, whose experience of school-age faith forever inoculated them against any religious tradition.

But what if the mockery might lead to the refinement of faith? Anthony Ashley Cooper, the third Earl of Shaftesbury, famously said that if a subject could not withstand the test of ridicule, then maybe it wasn’t as substantial or reliable as you first thought. This is where comedy proves helpful, for humour highlights shortcomings and punctures myths.

Most of the believers I know are comfortable enough to be able to laugh at themselves. Comedy, at its best, causes mirth and opens minds. But opening the mind isn’t an end, it’s a means. As G.K. Chesterton once said:

For many who believe the Christian story to be true, faith is neither feckless superstition nor a nervous punt. It is finding something solid often after testing, questioning, and even ridiculing. Which is why so many believers have come to love a film like Life of Brian. It cleverly mocks what they don’t believe in, and in a strange and surprising way, reinforces the strength of what they do believe.